Bud has sent in a couple questions about the PBD Elite 25. One of them was whether smaller companies could increase the returns of our original list.

It’s a good question. And we decided to take him up on it.

[For those who don’t remember, our Elite 25 are companies with high return on invested capital (ROIC), high growth and cheap.]

After all, since 1926, small-cap stocks have outperformed large caps by 3% per year. This may not sound like much, but it adds up to a lot over time.

That shows the power of compounding. Not only are these large numbers from a small $1,000 investment, but it also shows that a minuscule 3% difference adds up over the long run.

Bud asked us to find only stocks with a market cap below $200 million and $500 million and run those securities through our backtest. We were curious ourselves… so we hunkered down at our computers to find the results.

And the Winner Is…

However, we did run a few tests. And we capped the size of the companies at different intervals to see if there was a difference.

As the market cap got smaller and smaller, so did the potential pool of companies. That’s why you’ll see fewer companies in the $5 billion and $2 billion samples.

So here are the results when we cap the size of the companies at $10 billion, $5 billion, and $2 billion.

You can see that companies under $2 billion in market cap had slightly higher average yearly returns than the other sample sets.

The difference between PBD Elite 25 and companies with market caps under $2 billion is only 1.2% per year. But when compounded over 20 years, the difference is quite substantial.

Both are stellar returns, but I think we’d all agree: more money is better.

If anyone wants to dig into micro-cap companies, we think it’s a great idea.

These small companies have no Wall Street coverage. That means we are more likely to see pricing inefficiencies and bigger profit opportunities for you.

But there’s something you need to be careful about when investing in smaller companies.

Some had a market cap under $10 million. Just one person buying a small position can move the price of the stock. So there’s a good chance you might not be able to purchase all your shares at the same price.

Wall Street professionals call these adverse movements “slippage" because you see your returns fall (slip) from what you expected.

Because of that potential slippage, the return differential isn’t enough for us to change our original methodology.

Thank you, Bud, for the question. It led us down an interesting path. And I hope everyone learned a little.

P.S. Do you have any other factors you’d like us to test around the Elite 25? We’re always looking for ways to improve the screen and make more money. Let us know right here.

Don’t sell your gold just because interest rates are rising.

Common Wall Street wisdom says that as interest rates go up, gold will lose value. You see… gold and Treasuries are standard “safe haven” investments. When interest rates are near zero, there’s not much benefit to owning one over the other.

But as interest rates go up, Treasuries become more attractive. And gold, which pays no interest, loses its luster.

Here’s an example… Right now, you could earn about 2.4% on a safe 10-year Treasury note. So if you have $100,000, and you invest it in gold instead of Treasuries, you’d give up $2,400 in interest you would have earned from the note. And as interest rates rise, so does the amount you’d give up.

That’s the theory, at least.

But the market doesn’t seem to agree. 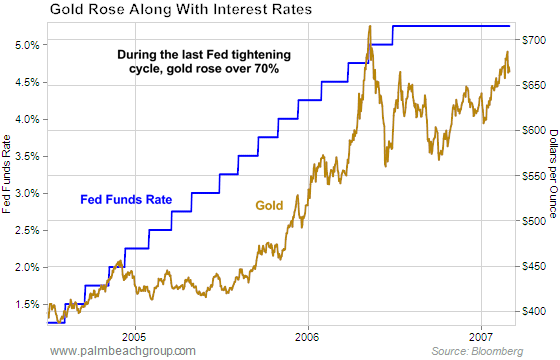 As you can see in the chart above, gold rose substantially during the last interest rate tightening cycle.

Continue to hang on to your gold. As we showed you a month ago, this rally still has further to go.

On December 22, Donald Trump woke up, turned on his phone, and dropped seven little words that could change everything for investors who take action immediately.

In that moment, Trump intensified a $4.4 trillion race for a mysterious type of fuel… A fuel that’s key to his entire energy plan… Click here to learn why Trump is setting up an absolute historic windfall for investors who buy into this fuel’s producers now. 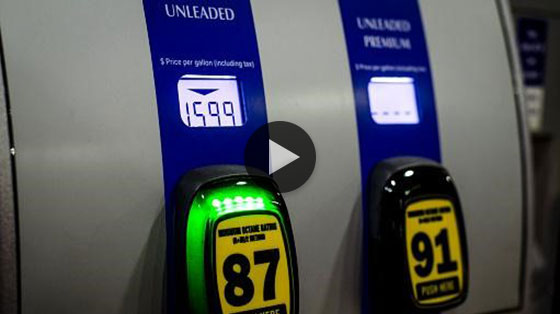