It’s been one of the biggest cryptos stories of the year. And one I want you to completely disregard.

Just this past weekend, the People’s Bank of China said it would “maintain high pressure on virtual currency trading hype.”

This announcement came shortly after China’s crackdown against bitcoin miners in the country. In May, at least five provinces ordered bitcoin miners to shut down their operations, essentially eliminating more than 90% of the country’s mining capacity.

The more likely reason for the crackdown is this: China plans to launch its own central bank digital currency (CBDC)… and doesn’t want it to compete with a superior cryptocurrency like bitcoin. (That’s a story for another day.)

Now, I know this type of anti-crypto action might seem extreme to some American crypto investors. But we’ve seen it before.

Back in 2013, China banned banks from handling any kind of bitcoin-related transaction…

In 2017, it tried to ban crypto exchanges in the country, causing a 21% fall in bitcoin’s price. And the most recent mining crackdown caused bitcoin to drop as much 50% from its all-time high of $64,863.

I’ve been discussing China’s fruitless bitcoin crackdowns for years… and each time – despite the short-term price drops that followed – they’ve only served to strengthen bitcoin and the underlying thesis for owning it.

What’s happening today is no different.

Miners provide the computing power necessary to run the bitcoin blockchain. They solve complex equations to verify transactions and keep the network humming along.

The incentive for devoting their time and processing power is a daily bitcoin reward.

After China announced its more aggressive crackdown in May, many of miners packed up shop and headed to friendlier jurisdictions in the United States, Canada, and Russia. 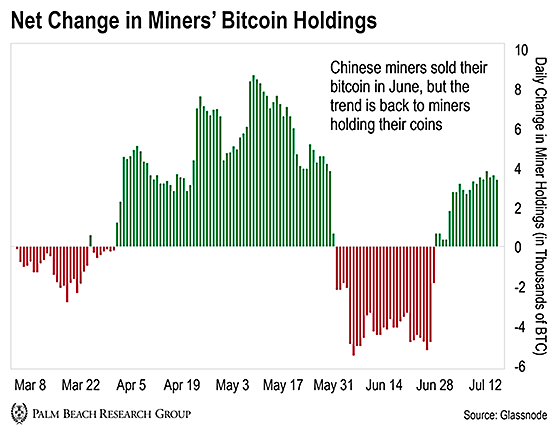 The patch of red in June is likely when Chinese miners liquidated their bitcoin and moved their operations out of the country… The patch of green in July indicates miners relocated to new jurisdictions and resumed holding their bitcoin.

Now, we won’t know the full extent of China’s mining purge for a few months…

But we can confidently assume how dramatic the crackdown has been for North American bitcoin miners by looking at the global bitcoin hash rate.

The Game Is Getting Easier for North American Miners

The global bitcoin hash rate is a simple indicator of how much bitcoin mining is happening across the globe.

Back in April, we saw it hit its peak of 198 exahashes per second… but about a month later, it began to fall.

Today, the global hash rate sits at 103 exahashes per second… and it has fallen by as much as 70% of its pre-crackdown level.

So about 47% of the computational power used for bitcoin mining has disappeared… an unprecedented decline. And it’s good news for North American miners.

A higher hash rate means the difficulty in mining bitcoin is also higher. So miners need more computing power to compete for the same amount of bitcoin rewards.

Think of this like a video game. If you lower the difficulty, your performance will likely improve. Not because you became a better player. But because the game got easier.

They’ve lost half their competitors, making the mining “game” much easier for the remaining players. And since the game is easier, they’ll “win” more mining rewards from verifying transactions on bitcoin’s blockchain more often.

BitOoda, a crypto analytics firm, measures how much revenue North American miners earn over the cost of powering their operations… That spread currently sits at $401 per megawatt-hour. One month ago, it was $229 per megawatt-hour.

Essentially, this means miners have seen their profitability double over the past month.

And it’s not because the cost of electricity has suddenly been cut in half… It’s because their “win” rate is increasing thanks to having fewer people competing for the same amount of bitcoin.

A Pack of Wild Elephants Is Coming

Friends, when you pull back the camera, you can see China has gifted virtually the entire bitcoin mining industry to North America.

And this isn’t just hyperbole. Some of the bitcoin miners in my Palm Beach Infinity portfolio have recently been added to the Russell 2000 Index.

It’s hard to overstate how big this is – not just for these companies – but for the bitcoin mining industry as a whole.

The Russell 2000 Index tracks the smallest 2,000 stocks among the largest 3,000 stocks on publicly traded markets in the U.S.

Joining the index means a lot more attention and funding for companies.

The Russell 2000 Index is also widely used by investment managers and institutional investors as the preeminent small-cap stock benchmark for both active and passive investing strategies.

It’s a great sign that bitcoin mining is entering the pantheon of the huge asset management industry.

And in my opinion, they’ll stampede into them like a pack of wild elephants.

If you want broad exposure to this trend, consider the Bitwise Crypto Industry Innovators ETF (BITQ). It has broad exposure to miners… but also includes companies in the broader blockchain ecosystem. So it’s not a pure-play on miners.

P.S. Thanks to China’s “generous” ban on bitcoin, crypto is gearing up for its next big run… And when it takes off, so will its underlying blockchain technology.

Right now, we’re in the early stages of a $30 trillion blockchain revolution… and you still have a chance to get in.

To learn more about my “No. 1 Investment of the Decade”… and how its potential gains could rival buying Microsoft in the ‘80s… Amazon in the ‘90s… and bitcoin in 2010… click here.