But instead of withdrawing all the money in one fell swoop, they drain your bank account in dribs and drabs.

One month, they take 0.5% of your checking account’s balance…

Two months later, they siphon off another 0.8%…

And it keeps going like that – in small, irregular amounts at random times. But over time, it adds up to a sizable portion of your savings.

How much of your money could they steal before you noticed or took any action to stop them?

This isn’t a hypothetical question.

In fact, you’ve been getting robbed exactly as I’ve just described.

Not by hackers, but by the systematic devaluation of your dollars – also known as inflation.

Over the last decade alone, your money has lost 20.1% of its purchasing power. That’s absolutely outrageous.

Yet that is the damage done by relatively tame inflation – roughly 1.8% a year.

And we are now seeing an annual inflation rate of 5.4% – three times as much as what we experienced over the last decade. 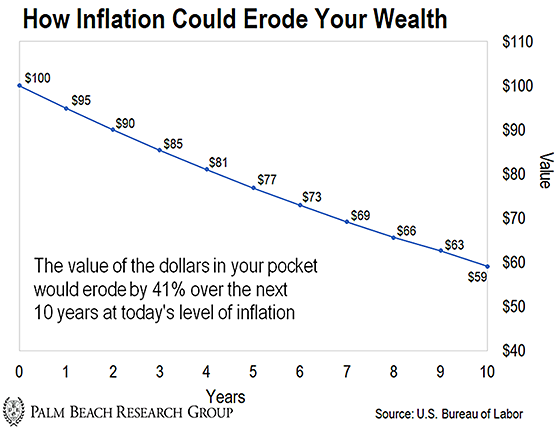 It’s shocking, I know. But at the current rate of inflation – as measured by the U.S. government’s own gauge – you stand to lose a staggering 41% of every single dollar’s purchasing power over the next decade.

If that isn’t highway robbery, I don’t know what is.

The good news is that you can take steps to protect your wealth right now – simple actions that can help keep you far ahead of inflation.

In fact, if you pick the right investments, you can make a fortune should prices start to spiral out of control.

Today, I’ll share one of our favorite inflation-beating ideas (and no, it’s not bitcoin.)

But first, let me show you why the recent high inflation figures could be just the beginning…

As you probably already know, inflation is tied to the amount of money in circulation. Every time the Federal Reserve prints more money, it reduces the value of the dollars already in circulation.

And because the Fed has to constantly print more and more dollars to keep up with the government’s spending, the value of your money is constantly eroding.

And the COVID-19 pandemic forced the government to kick its money-printing into overdrive. Since the start of the pandemic in March 2020, the U.S. government has spent an estimated $6 trillion to kickstart the economy.

But that could be just the start.

The bill includes $550 billion in new spending that’s set to flood multiple industries and sectors of the market.

Roads, bridges, public transit, electric vehicles, broadband access, and the power grid are all set to receive upgrades from this legislation and influx of capital.

Congress is also working on a separate bill that proposes another $3.5 trillion on initiatives such as education, health care, and housing.

If both bills pass as is, that adds up to nearly $5 trillion in additional spending. And that’s on top of the $4.8 trillion already budgeted for this year. So the Fed will have to accelerate its money-printing even further – which will send inflation soaring.

Bitcoin and other cryptos are the most powerful example of how you can protect your wealth. (More on that below.)

One of the Top Methods to Beat Inflation

A recent study by Vanguard found that for every 1% rise in inflation, commodities rise anywhere from 7% to 9%.

In contrast, Treasury-inflation protected securities (TIPS) – which are expressly designed to combat inflation – rise by just the same amount as inflation.

Even the broad stock market fails to provide an adequate return in periods of rising inflation.

SummerHaven, an asset management firm, sifted through 50 years’ worth of data on different asset classes in varying environments. Its goal was to find the assets best suited to offer outsized returns over different inflationary environments.

It found that during periods of rising inflation, the prices of commodity futures rose over 5x more than those of U.S. stocks. 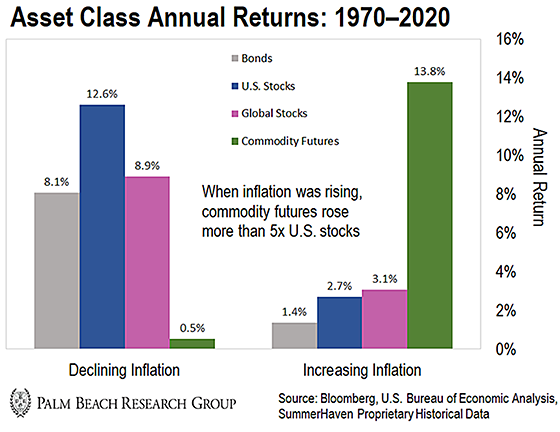 And when commodity prices rise, the companies with revenue tied to those prices tend to do even better.

Take the beginning of this millennium. Between January 2002 and July 2008, tensions in the Middle East, soaring demand from China, and a falling U.S. dollar caused oil prices to skyrocket.

This is why we now recommend increasing your exposure to commodities-related companies in the equity portion of your portfolio. Specifically, firms that directly benefit from rising prices for things that the world simply can’t live without, like food or oil.

If you want broad exposure to the commodities sector, consider the Invesco DB Commodity Tracking Fund (DBC). It’s one of the most prominent indexes in this asset class, as it tracks a wide range of commodity prices.

Remember, always do your homework before making any investment. And never bet the farm on one idea.

P.S. As I mentioned above, bitcoin and other cryptos are the most powerful example of how you can protect your wealth.

When it comes to cryptocurrency, no one has given more people the chance to change their lives than Daily editor Teeka Tiwari. And when it comes to his recommendations, none are more profitable than what he calls “Catch-Up Coins.”

And now Teeka says an unprecedented event is about to trigger a Hyper Boom in these Catch-Up Coins. It’ll be like a barrel of TNT on top of a crate of nitroglycerin sitting on top of 100 tons of weapons-grade plutonium.

That’s why on Wednesday, September 15, at 8 p.m. ET, Teeka’s holding his first-ever “Catch-Up Coin Hyper Boom” broadcast. During this event, he’ll discuss the six tokens he believes will explode in price from this future event.

He’ll also reveal the name of his No.1 Catch-Up Coin absolutely free just for attending. (It’s a coin he’s never revealed publicly before.)

When Teeka’s given away the name of his top coins in past events like this, you could’ve made an average of more than 17 times your money. That means simply attending could be the best investment you’ll ever make.

Teeka believes these six coins can transform your life from one of worry and despair to one of freedom and peace of mind in as little as 10 months.