From 1988-91, Bonilla was one of the best players in Major League Baseball. He was a six-time All-Star and won three Silver Slugger awards.

But in 1999, while he was playing for the New York Mets, Bonilla’s career started to fizzle. And the Mets decided to buy out the remaining $5.9 million on his contract.

Instead of a one-shot deal, though, the team agreed to make annual payments of nearly $1.2 million for 25 years, starting July 1, 2011 – including a negotiated 8% interest. That means Bonilla wouldn’t get paid for the next 11 years. But his payout pool would grow 8% each year, before the payouts started. And he’d earn that extra 8% for each payment afterward.

That’s why in New York, July 1 is known as “Bobby Bonilla Day.”

Of course, not all of us have a team owner to hand us million-dollar checks every year.

But the reason Bonilla’s checks grew so much each year was through the magic of compounding. And you can use it, too, to build your own retirement nest egg.

Today, I’ll show you how…

The Eighth Wonder of the World

Albert Einstein called it the “eighth wonder of the world.” Warren Buffett says it’s one reason he was able to amass such a huge fortune.

The key to compounding is to let it work over many years.

I call this the “hockey stick” chart because the money grows slowly for several decades, then really picks up speed after about 40 years. 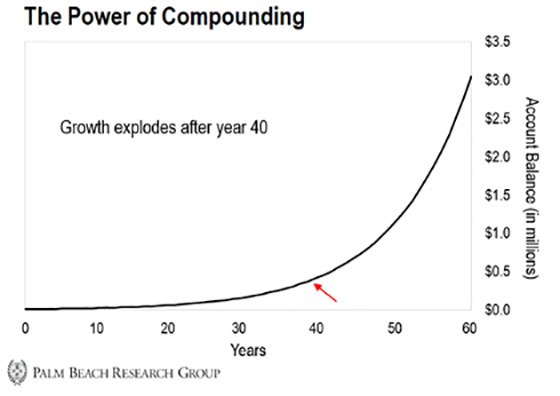 That’s why Bonilla’s smaller payments will more than quintuple over the life of his deal.

And the best way I’ve found to compound your money is by buying dividend-paying stocks and reinvesting the dividends.

But not just any dividend-payer will do. There’s a special class I look for…

The Cream of the Crop

The data is indisputable. Over the last century, the market has continued to climb higher. And that’s despite crashes, wars, and pandemics. 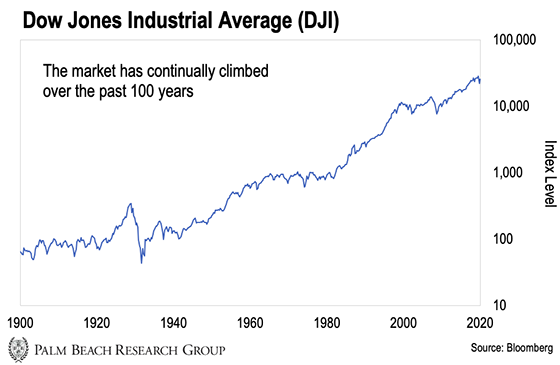 A 2017 study by an Arizona State University finance professor found that – over the past 100 years – just 4% of stocks have accounted for nearly all the market’s profits each year.

Now, I call these stocks outliers. These companies are unique in their business, grow sales and earnings at high rates, and have big profit margins.

And if you’re serious about making money, they’re the stocks you want to hold for the long term.

Outlier stocks are the best of the best. And superior selection means the difference between average returns and an outlier return.

Take Home Depot and Microsoft, for example. These are two of the greatest outliers of all time.

Now, let’s say you bought them both in 1995. Here’s a comparison of what would have happened had you reinvested the dividends or chosen not to reinvest them, over a 25-year period.

That’s the power of compounding outliers…

Now, it takes a while for the magic of compounding to kick in. But as you can see in the examples above, it’s worth the wait.

So here’s my simple strategy for building wealth in the markets: Buy outlier stocks… reinvest the dividends… and let patience be your friend.