Since the pandemic began in March 2020, the federal government has injected nearly $9 trillion into the economy.

The money helped prop up the economy. But it came at a cost: Sky-high inflation.

Today, inflation is at a record-high 8.6%. Everything from gas… to food… to furniture costs much more than it did two years ago.

To combat the economic fallout from the pandemic, the Federal Reserve pumped more new currency into the U.S. economy than it had issued in the previous 14 years combined.

And as the Fed printed more money, the rest of the dollars we held became worth far less.

It’s simple supply and demand… the more you have of something, the less it’s worth.

Imagine if Apple doubled its share count tomorrow without a corresponding rise in revenue and profits. What would happen to the price of the stock?

Its value would get cut in half.

The same is true for currencies. The face value of the currency note doesn’t change… but its buying power falls when the Fed prints too much.

How Bitcoin Can Protect Your Long-Term Capital From Inflation

Despite its volatility, I believe that over time bitcoin is the best hedge against inflation. No other asset comes close.

“Big T, are you crazy?! Bitcoin is down 70% from its all-time high. How can an asset that drops so much in value be a hedge against inflation?”

Look, I get it. It’s a common refrain from people who simply don’t understand bitcoin.

They just look at the daily price chart of BTC and call it a failed experiment every time it drops.

Look at the chart below. It shows the price of Satoshis (SATS) per U.S. dollar… 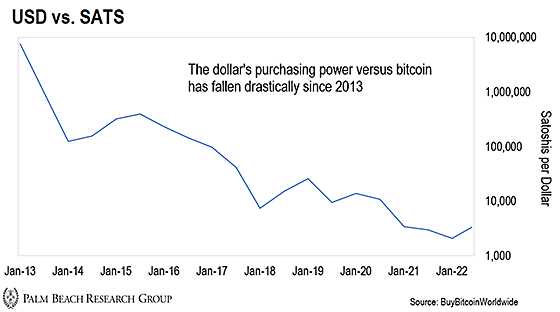 Here’s why this chart is important…

No other asset I know of has increased in value that much over the past decade. Not one.

Because of bitcoin’s pre-programed scarcity and Proof-of-Work security, I expect that trend to continue for many decades to come.

That’s why I say – despite its pullback – bitcoin is the best inflation hedge today.

And it’s only going to see its value increase. That’s because the government will continue printing and sending the dollar into oblivion.

So why do they keep doing it?

A weaker U.S. dollar is a blessing when you owe a debt in U.S. dollars. It allows you to pay back your debt in watered-down currency. So the government just prints more dollars to cover what it owes.

Of course, this is a simplified example. But it illustrates my larger point.

The more money the government prints, the less it’s worth, so they get to pay back their loans with dollars that have less buying power.

Meanwhile, the value of hard assets will soar relative to the dollar. And in my opinion, bitcoin is the hardest money there is.

Like the Big Mac example above, each dollar will buy fewer SATS. That means the value of each Satoshi will increase relative to the dollar.

This is the story you’re not getting from the mainstream press… instead, they look at bitcoin’s falling price and tell you that crypto is dead.

Here’s the deal with bitcoin: it’s volatile. Crazy volatile. But over any four-year rolling period… its performance has always outpaced the rate of inflation.

Not only has BTC beat the pants off of inflation… it has buried every other asset you can think of: Like stocks, bonds, real estate, and collectibles. It’s rolling four-year performance is unapparelled.

The downside? You have to be willing to deal with crazy volatility like now.

Even with bitcoin’s most recent 22% crash, the value of 1 SAT has grown by 28% in the past year. Meanwhile, inflation has eroded the U.S. dollar’s value by 27% over the same period.

Sound money goes up in value over time. It doesn’t go up in a straight line… But it will be worth more than it was in the past.

But as adoption increases, bitcoin’s volatility will tamp down. The crashes will be fewer and farther between… and they’ll be less severe than they are now.

Look, I understand. We can’t get away from fiat currency. We must use dollars to transact in this economy.

But there are steps you can take to protect the value of your money over time.

First, I recommend keeping no more than 3–7% of your net worth tied in cash at any given time. Inflation will just destroy your money.

The next step would be to allocate up to 10% of your capital to sound money like bitcoin.

Look, bitcoin isn’t the entire solution to fighting inflation. But it’s a really important piece… if you want to protect and grow your wealth.

Friends, if you’re falling behind financially or just can’t seem to catch up because of rising prices… It’s not your fault.

The mainstream media and Wall Street have misled you about bitcoin. They still believe it’s just a speculation.

Meanwhile, they’ve made it seem like there’s nothing you can do to fight inflation.

But I know better. In the future, bitcoin will be a base layer of the world’s financial system – similar to the way central banks use the U.S. dollar and gold as reserves.

I know that’s hard to see, let alone believe right now. I get it.

Ask anyone that has developed massive wealth… and they’ll tell you they created that wealth by having a vastly different opinion from everyone else.

They then backed that opinion with sweat equity and money.

Fortunes don’t come from following the crowd. They come from going against conventional wisdom.

They come from letting go of the fear of feeling foolish and backing your judgement over the judgement of others.

This has been the pathway to wealth that thousands of my subscribers have traveled to claim their financial freedom. If it was easy everyone would be rich. Getting rich requires mental and emotional toughness.

That’s why I’m asking you to be mentally tough right now. Leave your bitcoin be.

And let us simply rely upon the incentives in bitcoin that have taken it from an oddity dominated by computer “nerds”… to becoming a globally recognized financial asset embraced by the world’s largest financial institutions.

Let the Game Come to You