Nick’s Note: On Mondays, we turn over the reins of the Daily to former hedge fund manager Teeka Tiwari for his big-picture view of the markets. It’s a feature you’ll only find right here.

Earlier this month, the mainstream press rattled the crypto market when it reported a major financial firm was ditching its plans for a crypto trading desk. Teeka immediately flagged it as fake news to his subscribers. It’s just the latest reason you should ignore the fear-mongering headlines when it comes to cryptocurrencies…

Here’s what the online publication wrote:

The bank is ditching plans to open a desk for trading cryptocurrencies in the foreseeable future, according to people familiar with the matter, as the regulatory framework for crypto remains unclear.

As part of that decision, Goldman has moved plans to open a desk for trading cryptocurrencies further down a list of priorities for how it can participate in cryptocurrency markets, the people said. It may revive these plans later, they added.

(I first told my subscribers that Goldman was launching a crypto trading desk in May 2018.)

But the Business Insider report freaked out the market.

People were thinking, “Oh my goodness, if Goldman Sachs doesn’t like crypto, then how much value can crypto have?”

Here’s the thing… It was all fake news.

I told my Palm Beach Confidential subscribers as much in a September 6 update (subscribers can watch the update right here).

There’s one reason which everybody thinks is the main reason [for the drop in bitcoin’s price]… and then there’s the real reason why we’re down. So what I’m going to do here is just walk you through a couple of different news stories. I’m going to share my screen with you and let you know what the “fake” reason is…

But you don’t have to take my word for it…

I was in New York yesterday [September 6] and I was co-chairing our risk committee, and I saw the news article. It wasn’t like we announced anything or that anything had changed for us… I never thought I’d hear myself actually use this term, but I’d really have to describe that as fake news.

In today’s essay, I’ll explain why you should be wary of anything you hear about cryptocurrencies from the mainstream media…

Before I show you why the report was fake news, I want to make something clear: Cryptocurrencies don’t need Goldman Sachs to be wildly successful. Let’s just get that established right off the bat.

Political and economic crises in Venezuela, Argentina, Turkey, and Iran have caused the value of their currencies to drop by as much as 99%. Further, much of the world lives under regimes that regularly destroy the value of their paper money.

As cryptocurrencies like bitcoin become easier and cheaper to use, it’s our belief the citizens of those countries will use bitcoin as a long-term store of value.

So with or without Wall Street, crypto assets are destined for widespread adoption.

The more important takeaway though, is that you need to dig deeper when you see fear-mongering headlines about cryptocurrencies.

But for now, Goldman is focusing on other projects such as a custody product for crypto, which would mean that the bank holds cryptocurrency and, potentially, keeps track of price changes on behalf of large fund clients. [Emphasis added.]

This is hugely bullish for cryptocurrencies because the lack of credible custodians has kept institutional money from making crypto investments.

This should come as no surprise to regular readers of the Daily. Just last month, I told Nick that I’ve talked to people behind the scenes who are working on custody solutions.

But most reports ignored that part of the Business Insider story…

Instead, they focused on the fake news headlines about Goldman ditching its crypto trading desk. As I explained to my subscribers… if you’re offering custody, you’ll more than likely offer trading as well.

That’s why I dismissed the news as unimportant and “fake.”

Ignore the Noise and Look at the Bigger Picture

When it comes to new technology like cryptocurrencies (and their underlying blockchain technology), you have to look at the bigger picture.

And what’s the bigger picture?

While the media fret over “trading desks,” Wall Street firms are quietly prepping crypto services for their clients. Fidelity, Nomura, JPMorgan Chase, and Northern Trust are all getting into the crypto custody business.

And this trend is just beginning.

Events are unfolding that will force even more traditional financial firms into cryptos. To find out more, come join me in Bermuda at our first annual Legacy Investment Summit from October 17–19.

I’ll be sharing the details on my latest research that proves why a tidal wave of traditional institutional money will flood into cryptos. You can get the details here.

A once-in-a-decade tech event could create a whole new group of millionaires—starting November 14.

You’ll also get the names of four stocks on Jeff’s watchlist—free, just for attending…

Reserve your free seat and get all the details right here… 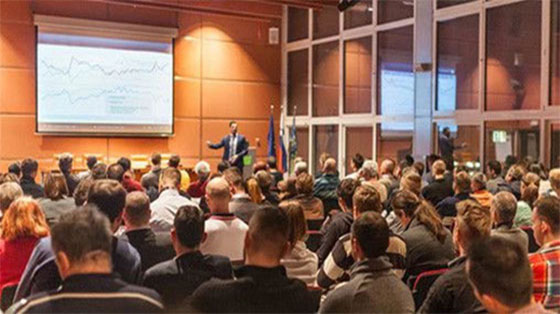