Something really interesting is happening in the world of gasoline right now.

Gasoline has historically been viewed as an “inelastic good”… meaning that changes in prices have had little influence on demand.

After all, most of us don’t have a choice about driving to work or running errands in the car… There’s no easy substitute.

But we’re now seeing demand slowing for the fuel that moves our lives.

U.S. gasoline demand declined 8.2% in the week ending June 10 compared to one year ago.

Meanwhile, the oil demand fell by 110,000 barrels that same week compared to the prior week.

That’s especially noteworthy because summer is historically the highest demand season for gas.

Tons of Americans are traveling for vacations, visiting family, driving across the country, and going boating. And in these hot summer months, air conditioning is a necessity, even though it can reduce fuel economy in our cars by as much as 25%.

On average, gas demand increases a few percentage points each month beginning in February and peaking in August. And demand for fuel is typically 10% to 15% greater in August than in February.

And how does this impact the energy stocks many of us have been buying this year?

So is the party finally over?

The Decline in Demand 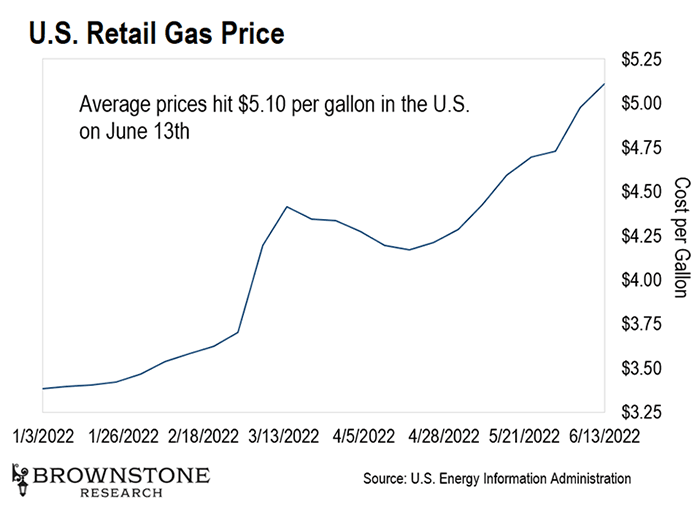 And now these high prices at the pump are finally starting to crack demand.

People are combining trips for errands, driving less, avoiding those summer days out on the boat, and choosing to fly due to the sky-high costs of road-tripping with these fuel prices.

And maybe they’re even thinking twice before turning the air conditioner down that extra degree to keep things cool.

Today prices stand around $4.80 per gallon… So readers may be wondering if now is the right time to sell out of their energy holdings before they tumble…

Is Now The Time To Sell?

Gas typically has two more months of running to go before it reaches its peak. Even if demand is falling, the seasonal support for fuel should sustain us for a least a few more weeks.

Peak demand for the summer season occurs in July and August. Of Americans vacationing in the summer, roughly 46% plan to go in July and another 36% will vacation in August – that means we still have 82% of the summer vacation demand remaining.

After that point, the sheer seasonal demand should start to wane.

And according to historical patterns, we should see gas prices rise another 7.5% (or $0.40) and hit $5.50 a gallon before we see prices begin going down in September…

So that can be a price level to watch as we gauge demand.

Additionally, crude oil and refinery companies are still expected to report record second-quarter earnings from the sky-high prices we’re all paying at the pump.

That could easily lead to big bumps in their stock prices as earnings come out in August and early September.

So now doesn’t necessarily seem like the best time to sell.

Going into September could be the prime time to unload gas-focused energy stocks at their peak.

Seasonal demand and record earnings will push share prices to their max. Investors will have the opportunity to cash out before demand follows historical decreases going into the fall.