What is money really worth if you can print an endless supply of it?

I asked my readers that question in the March 30 edition of the Daily.

At the time, Congress had passed a $2 trillion stimulus package to rescue the U.S. economy from the coronavirus pandemic. And the Federal Reserve was printing twice that much to revive the financial system.

Friends, this money isn’t free. It has to be repaid…

Now, I don’t believe the U.S. will default on its debts. Instead, I believe the Fed will dilute the value of the U.S. dollar.

And we’re seeing that happen now…

As you can see in the chart below, the USD Index is down almost 10% since its peak in March. 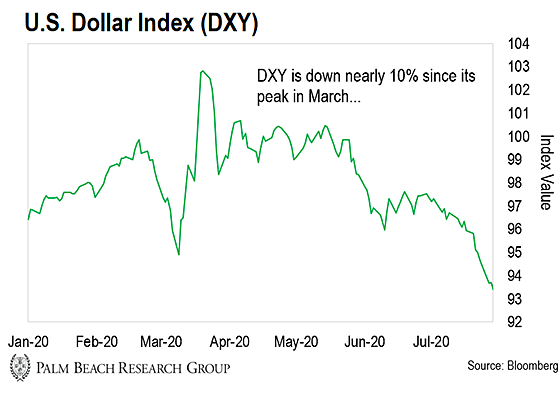 This is the biggest decline in the value of the U.S. dollar we’ve seen since 2017. And in our view, it’ll eventually touch off a firestorm of inflation that’ll destroy the value of the cash savings of every American.

Back in March, I told you the best way to hedge a declining U.S. dollar was to buy bitcoin and gold. Since then, gold has shot up 21%… and bitcoin has rocketed even higher, at 82%…

I believe there’s more weakness ahead for the dollar. And that’s going to make the current gains in gold and bitcoin look like peanuts…

A Robbery Is in Progress

A weaker U.S. dollar is a blessing for politicians and central bankers.

You see, as the lender of last resort, the U.S. can’t default on its debts. But it can reduce its debt burden by cutting the real value of money.

Of course, this is a simplified example. But it illustrates my larger point.

Normally, the interest I pay you will cover inflation. But in today’s world, you’d actually pay me interest to hold your money. In other words, factoring in inflation, lenders are now paying borrowers.

It’s insane… But that’s exactly what investors are now doing with trillions of dollars of sovereign debt.

But borrowing money for free isn’t enough for the bankers. They want an even better deal.

So what I’m suggesting is central banks will dilute money so much that 10 years from now… $100 may only buy 12 Big Macs.

In other words, the government will have no choice but to dilute the dollar.

The Fed’s current balance sheet is at $6.9 trillion. And it’s projected to swell to as much as $10 trillion over the next few months. And President Trump and Congress plan to spend at least another $1 trillion on the next COVID-19 stimulus bill.

The only way it can dig itself out of this hole without defaulting on its debts is to devalue the dollar.

Bitcoin and Gold Will Continue to Soar

Since the dollar started losing strength in March, gold has gone bonkers… 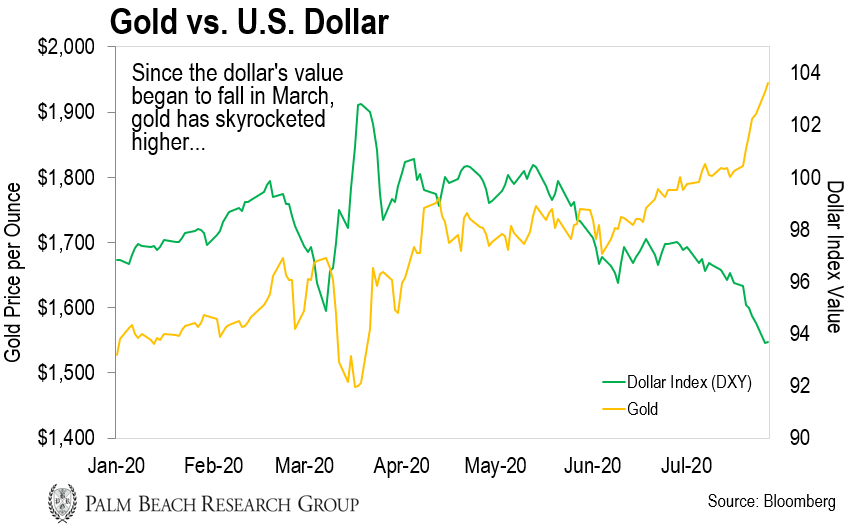 And while I’m bullish on gold right now, I believe bitcoin will do even better.

Take a look at the chart below. It shows how bitcoin performed the last time the dollar weakened… 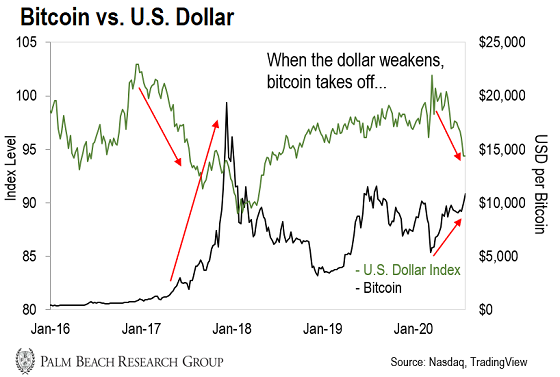 And it’s gearing up again.

After trading sideways for months, bitcoin finally exploded above $11,000 this week.

Every central bank in the world is about to dilute the value of their paper money at a scale we’ve never seen before. But they can’t devalue gold or bitcoin.

And that makes them the only refuge for investors looking to shelter their money from the ravaging effects of reckless money-printing.

Gold prices could easily double from these levels. And bitcoin could quadruple (or more).

The key point is, out-of-control money-printing will massacre the buying power of dollars, euros, yen, rubles, etc. So it’s imperative you hedge your buying power by owning some gold and bitcoin.

And if you want exposure to these two trends, consider a small position in SPDR Gold Shares (GLD) and bitcoin. They’ll both gun higher as central bankers continue to print money out of thin air.

P.S. As this reckless money-printing continues, bitcoin will boom higher. As much as bitcoin will rise, the boom in the so-called “altcoins” will be much bigger. “Altcoin” is the name given to any other crypto other than bitcoin.

I’m so excited about getting the work out on this opportunity, I even went head-to-head with America’s biggest crypto hater, Judge Jeanine Pirro. This judge is tough, and the back-and-forth was no-holds-barred.

Take a look and let me know who you thought “won.”