You wouldn’t know it from watching the news… but despite the IPO hype we’ve experienced the last few years, nearly half of the publicly traded companies in the U.S. have vanished since 1996. 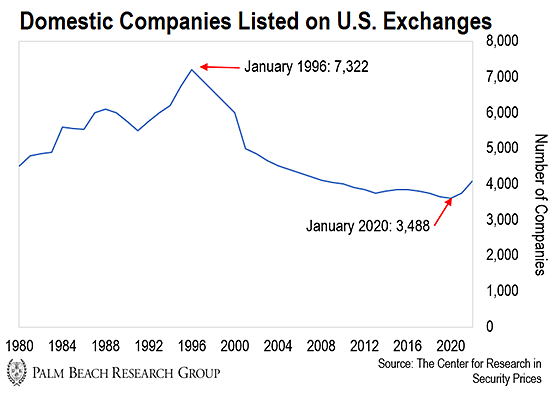 And it’s not just CRSP reporting a decline…

This trend isn’t set to reverse, either. A few years ago, global consulting firm McKinsey & Company projected 75% of S&P 500 companies will be gone by 2027.

Even with the recent IPO and SPAC boom, there are still only around 4,463 public companies listed on major exchanges, per Bloomberg.

But fewer companies hitting the market can mean greater returns if you know where to look… and understanding this trend can put you in a position to make crypto-like gains when companies go public.

Companies are staying private longer because it’s more profitable. And when they eventually go public, they do so at much higher valuations.

As the chart above shows, from 1999 to 2020, the average market cap of private companies at the initial public offering (IPO) jumped 776%.

There are fewer public companies to choose from (meaning fewer opportunities to make profits). And buyers pay a lot more for companies when they go public.

So not only did pre-IPO investors watch their share prices rise substantially… IPO-day investors paid significantly more for those same shares.

Compare that to the pre-IPO values of big-name stocks like Amazon and Microsoft, and the trend becomes crystal clear…

Companies are accumulating higher valuations while private, which results in greater gains for pre-IPO shareholders… but substantially lower returns for retail investors who buy on IPO day.

Early investors buy pre-IPO shares for pennies on the dollar… watch as pre-IPO valuations soar… and then cash out when the public money pours in on IPO day.

So early investors are laughing all the way to the bank. They’re making big profits by off-loading their private company shares, with massive valuations, onto unsuspecting public market investors.

Today, it’s happening more often and much quicker than decades ago. And we expect one sector of the IPO market to post some of biggest returns in 2022: The metaverse.

We’ve done the research. And there are 22 companies tied to the metaverse that have an IPO set for this year, with more on the way.

But before you buy any of them, I want you to heed this warning from Daily editor Teeka Tiwari…

Wall Street is working against you to make sure you don’t understand the metaverse. Sure, they’ve got their eyes on some of the biggest metaverse companies set to hit the market.

They’ll even go so far as to pitch you some legitimate future leaders in the space… but you can do better.

Your Blueprint for a Strong Financial Future

There are two ways to play the coming flood of metaverse pre-IPOs: What Teeka calls the “Hype Hole” path and the “Blueprint” path.

The Hype Hole is the one Wall Street wants you to follow.

Down this path, they fool investors into buying an IPO by setting you up for double- or triple-digit gains on your investment. That’s not bad…

But with the pre-IPO Blueprint path, you can do better.

It’s the strategy Wall Street elites and well-connected Silicon Valley insiders use to make their fortunes.

As you can see, falling into the metaverse Hype Hole could mean the difference between achieving the life you’ve always wanted in about a year… or spending decades trying to retire off meager gains.

That’s why last night, Teeka showed livestream viewers how to tell the difference between these two paths.

He explained the simplest and fastest way to get you from where you are now to where you want to be in 365 days or less… and even revealed details on his first-ever Blueprint metaverse deal.

So, if you missed last night’s metaverse livestream, be sure to check out the replay right here.

With fewer publicly traded companies coming to market, your shot at life-changing pre-IPO returns will be more limited than ever. And Wall Street will be more eager than ever to lead you down the wrong path.

Let Teeka show you how the metaverse and the Blueprint path can help you fund the life you deserve in just a year’s time… and keep you out of the Hype Hole that only benefits Wall Street.