Nick’s Note: One of the most frequent questions we’ve received from readers is, “When will institutional money start heading into the crypto space?”

In today’s essay, Palm Beach Confidential analyst Greg Wilson shows that institutional moves are already underway. And it won’t take long before this trickle turns into a flood…

Modern Tech is the company behind a cryptocurrency project called Pincoin.

Pincoin billed itself as a platform for the sharing economy.

It told investors they could make up to 48% per month. Payback on their initial investment would take just four months. And investors would receive a bonus for every new member introduced to the platform.

The website prominently displayed a yellow Lamborghini. And it detailed how investors would reap the benefits from the “Sharing Economy 2.0.”

If it all sounds like a scam, you’re right. The demonstrators left without any justice. They didn’t even get to confront the offenders.

Modern Tech, its seven-person team, and the money had disappeared the month before.

At $650 million, Pincoin is one of the biggest initial coin offering (ICO) scams in history. And it demonstrates why cryptocurrencies often get a bad rap.

These are the headlines the average person sees. And it keeps them on the sidelines.

That’s why results from a recent Gallup poll were no surprise. It showed that 72% of investors “have no interest in ever buying bitcoin.”

Bitcoin is a good proxy for the cryptocurrency market in general.

But as I’ll show you, cryptocurrencies and blockchains aren’t going away. And one major financial institution—with over 100 years of history—just joined the fray.

Losses from new technologies are nothing new. Today, we have ICOs and cryptocurrencies. Twenty years ago, it was initial public offerings (IPOs) and internet stocks.

Remember Webvan? You could order groceries online and have them delivered to your home.

Or how about Pets.com and its infamous sock puppet? The online seller of pet supplies raised $100 million in venture capital and another $82.5 million in an IPO.

It spent heavily on marketing… but never made a penny. About a year later, it shut down operations. After selling its remaining assets, investors got pennies on the dollar.

Today, no one thinks this is a big deal. After 20 years of retrospection, the benefits brought about by the internet are obvious.

We can communicate with one another and share information like never before. It takes milliseconds and costs fractions of a penny.

Twenty years from now, I bet we’ll feel the same about cryptocurrencies and the blockchain.

While the old era was about information, the new era is about value. We’ll be able to exchange value like we do information now—quickly and cheaply.

And it won’t just be money. It’ll be any type of asset, from stocks to music to frequent flyer points.

In short, it will revolutionize the financial system we know today.

The list goes on and on, but there’s one more company I want to tell you about today.

As Teeka Tiwari told Palm Beach Confidential subscribers the other day: “This event is huge. And no one is talking about it.”

The company I’m talking about is Northern Trust Corporation. It’s a white-shoe financial services company that’s been serving clients since 1889.

Its clients are the best of the best. They include Fortune 500 companies, institutional investors, and high net worth individuals.

In total, Northern Trust has $10.7 trillion in assets under custody.

And it’s getting into crypto in a big way:

That’s big news. Custody is one of the pain points for cryptocurrency institutional investment.

You see, institutions can’t own and hold the securities they buy on behalf of clients. A trusted custodian must hold the assets for them, minimizing the risk of theft or loss of assets.

A service from Northern Trust would go a long way toward solving that problem. And it’s going to help bring massive capital inflows into the cryptocurrency market.

So how do you take advantage of this news?

Per the same Gallup poll mentioned before, just 2% of investors currently own bitcoin.

That means investors who get in now are still early to the game. So there’s still plenty of upside ahead.

Northern Trust’s move into this space proves cryptocurrencies are here to stay… and that institutional money isn’t far behind.

One way to benefit is to buy bitcoin.

As always, we recommend you take a small position size. Don’t bet more than you can afford to lose—$200–400 is enough for a small investor to make life-changing gains.

Bitcoin and all cryptocurrencies are volatile. So small position sizes will allow you to keep a cool head during extreme periods of volatility in the crypto market.

P.S. Last month, Teeka received more than 16,000 questions from viewers worldwide during his live broadcast from Glenn Beck’s Dallas studios. The interest was so overwhelming that Teeka has decided to hold a special live Q&A session tonight at 8 p.m. ET.

He can’t give you personalized advice. But he’ll be happy to cover any cryptocurrency questions, from how to open an account… to his investing strategy… to the “Cryptocurrency Conspiracy”… and anything else that’s on your mind…

You can register for this free event right here.

From Wey K.: Hi Teeka. Recently, there was an announcement that Intercontinental Exchange (ICE) is partnering with Starbucks and Microsoft to form a new company called Bakkt. This new partnership will help institutions buy, sell, and trade cryptocurrencies.

I think its plan to allow people to tap into their 401(k)s and provide custodial services for cryptos is very bullish for bitcoin. What are your views on this?

From Cal P.: An update from Teeka is necessary to explain why Goldman Sachs is bashing bitcoin now with the same tired arguments… and why bitcoin is dropping in price despite the major news that ICE plans to create a global ecosystem for digital assets and physically delivered bitcoin futures contracts this November.

This sounds very fishy. Are “banksters” in a conspiracy to short bitcoin futures, just as they have suppressed precious metals for years?

From George B.: Dear Teeka, a recent article I read in the Federal Communications Commission’s Daily Digest said not to expect new bitcoin highs in 2018. It raises some interesting issues that I hope you could discuss, such as an assertion that “miners are and will stay responsible for a significant amount of selling in the market.” Any thoughts?

From Peter S.: Hi Teeka. I’m curious to know what you think will happen to cryptocurrency values when a big stock market crash occurs. How will the value of cryptos fare in relation to stocks, bonds, or precious metals?

Nick’s Reply: Thanks for your questions, guys. Teeka is holding a live Q&A tonight at 8 p.m. ET, and we’ve forwarded your questions to him for the event. This will be a rare opportunity to have a former Wall Street vice president answer your questions live. 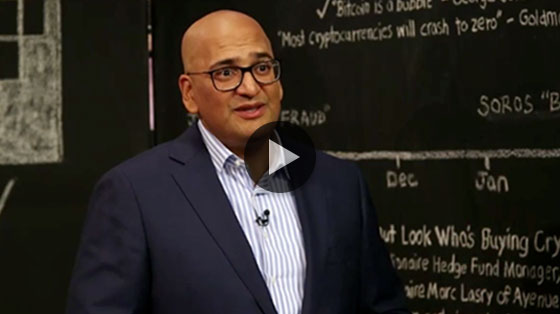