When most people think of big-money traders, they probably envision something like Martin Scorsese’s hit movie, The Wolf of Wall Street.

Leonardo DiCaprio stars in the film, which is based on the true story of Jordan Belfort. 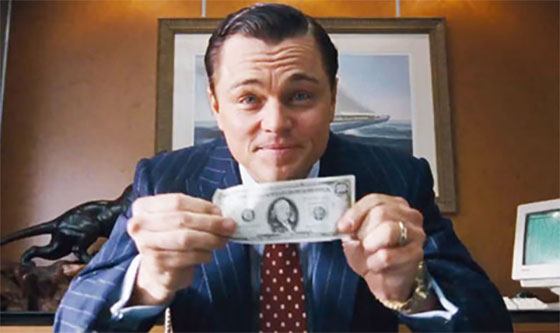 The movie follows Belfort’s rise from entry-level trader to one of the wealthiest stockbrokers in the world… to his eventual downfall into crime and corruption.

You know how the story ends. After living the fast life of sex, drugs, and alcohol, the feds eventually take down Belfort and his merry band of brokers.

In the end, they get their comeuppances.

Today, I’ll share with you what that other side is—and most importantly, how to profit from it. But first…

I Lived the Life, Too

Like Belfort, I also started on Wall Street as an entry-level trader. And I made partner at the prestigious Cantor Fitzgerald firm at age 28.

Cantor is still a powerhouse now. It oversees trillions of dollars in trades every year for some of the world’s heaviest hitters.

When I was at Cantor, celebrities, dignitaries, and even royalty visited our trading floors: Prince Charles, Bill Clinton, Bill Cowher, and more… And I even got to hang out with supermodels like Kate Upton and Petra Nemcova.

It sounds crazy saying it now, but I’d be in Switzerland one weekend, skiing the Alps with my well-to-do clients… and then in Morocco the next, quad-biking the deserts outside Marrakesh. Then, I’d be back at Madison Square Garden with front-row seats to see Jay-Z.

I lived on the Upper East Side—coincidentally, on the same floor as Michael Gambon, who played Albus Dumbledore in the later Harry Potter movies.

It was a good life. And I had serious loyalty to my firm. But I wasn’t in control of my own financial destiny. That’s something no amount of money can buy.

Plus, working on Wall Street consumed my life. I easily worked 11-hour days—and that’s before having to entertain my clients. I lived in Manhattan to make it easier to quickly swing by home to see my family before going out again. But I wanted more time with my wife, my kids, and my dogs.

So that’s why I left Wall Street for Florida. It’s more relaxed, and I can see my family whenever I want. I can have lunch with my wife… take the kids to school… and even run the dogs on the beach.

That’s what I wanted: to live life on my own terms—and help others do the same with the “unbeatable” stock-picking system I created after leaving Wall Street…

The Other Side of Wall Street

Unlike Belfort, I didn’t let Wall Street take me down a path of crime and corruption.

Instead, I decided to create a system that would help Main Street profit from the same moves the big boys make.

You see, when you’re dealing with billions of dollars, you get to see how the market really works. And I was one of only a few hundred people in the world with the authority to place trades of over $1 billion for the biggest players on Wall Street.

Now, when big institutions put money into stocks, they can change their price directions altogether and lift them to new highs.

But they can’t just buy stocks in one go; they have to buy in chunks. So they leave signs that only someone like me can detect—because I’ve been on the other side of that trade.

My system scans nearly 5,500 U.S. stocks every day, looking for the best of the best companies that big institutions are buying up. And I use 80 complex algorithms to score and rank each one of them for strength across 29 factors.

It would take all day to explain what’s “under the hood” of the scoring process. But to make it simple: The higher the score, the more likely the stock will break out.

And when we get big-money buy signals on the strongest, high-scoring stocks, they appear on my top 20 buy list.

One company on my list right now is SolarEdge Technologies (SEDG). It makes power optimizers that maximize the electrical output of solar panel systems.

Now, we own SolarEdge in my Palm Beach Trader portfolio. And it’s up over 41% since we added it in June 2019. So it’s above our buy-up-to price.

But if you’re interested in a company that’s getting fresh buy signals, it’s one you can put on your radar. Just remember to do your research before investing in any company.

Look, I left Wall Street after nearly 20 years to develop this system so I wouldn’t have to live that lifestyle anymore. And I believe it can help you make enough money to live the type of lifestyle you want, too.

P.S. On Wednesday at 8 p.m. ET, for the first time ever, I’ve assembled a panel of Wall Street experts who will put my system to the test.

It includes the man who headed up Research Sales at Bloomberg Tradebook, Craig LoGrande… the $2.5 billion asset manager Forbes called the “King of the Quants,” Louis Navellier… and the former Managing Director of the Chartered Market Technicians Program for Investopedia Academy, Gordon Scott…

Plus, we’ll use my system live on camera to identify the No. 1 stock in five of the hottest market sectors today.

And you’re invited to join us for the online premiere of this event for free. Be sure to reserve your seat today automatically by clicking right here.