But I believe we’re just in the early innings of a historic gold bull market.

There are many reasons why I think the precious metal will soar to new highs.

First, in an attempt to paper over the market’s insanity, the feds continue to unleash a wave of money-printing unlike any we’ve seen before.

Since the market crash in March, the Federal Reserve has pumped out $3 trillion in new money supply. There’s more coming.

Intuitively, made-up money shouldn’t solve real economic problems. But it worked in 2008. And it might get us through the current crisis as well.

Since its March lows, the Dow is up about 50%. Stock markets could glide on and continue rising. In fact, stock prices might rise faster than ever because of all the new money sloshing around.

But historically, October is a “witching season” for market crashes. It’s almost a self-fulfilling prophecy. Everyone worries and selling can quickly accelerate into a runaway collapse.

Typically, when this happens, people rush out of stocks… and into gold.

But it likely won’t be a straight shot higher for gold. There will be surges and dips along the way, as we’ve seen these last few weeks.

I understand this can be unsettling for those with positions in gold. And I get a lot of questions from readers wondering what to expect in the months ahead, like this one from Daniel:

Will gold stocks sink as deep as they did in March if we have another crash? Why or why not?

If we do get a major crash, physical gold likely will offer protection. Historically, gold prices fall less than other assets during financial panics.

But here’s the critical point: Gold will likely fall initially if we get a crash. During crises, people sell everything. That includes physical gold. We saw that back in March, when the gold price dropped 12% in 9 days – even as the gold supply dropped as mines halted production due to the coronavirus restrictions.

Past Crashes Show What Lies Ahead

As for what could happen in the months ahead, I’d like to point to a couple of historical examples as my second reason why I believe the gold bull market is just beginning.

But although it took the Dow four years to recoup its losses, gold quickly rebounded. By September 2009, it was back to $1,000. It then soared to a record $1,927.70 in 2011 – triggering a massive bull market in gold stocks. The VanEck Vectors Gold Miners ETF (GDX) shot up 257% in just under three years.

Many people don’t realize, but the troubled 1930s were the same. Gold mining was one of the few industries that prospered.

The initial shock in 1929 wiped out many stock investors and companies. And a second collapse clobbered more investors in 1930. You can see that in this chart below… 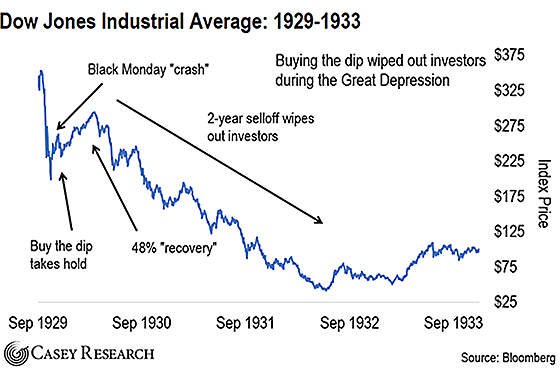 But here’s the surprising thing: That collapse triggered big gains for gold stocks.

Here’s another chart, showing major gold miner Homestake through the 1930s. Notice how it took flight starting in 1931, when the big crash was in full swing… ending the decade on a 441% gain, compared with a 54% loss for the Dow. 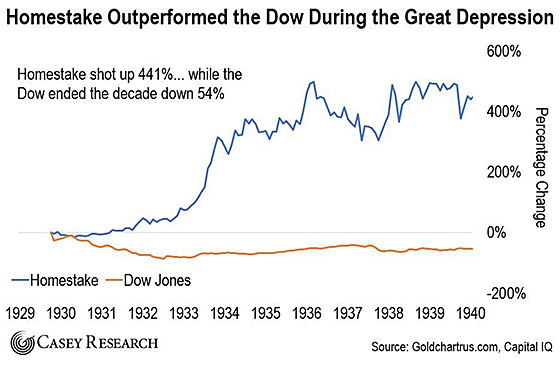 Gold stocks like Homestake got a big lift in 1934, when President Roosevelt raised the gold price nearly 70% to $35 per ounce. That set off a gold-mining bull market that lasted through much of the Great Depression.

Although we’re now off the gold standard… and presidents can’t revalue gold… over the past 15 months, gold prices have already risen 37%. So I think we could see something similar unfold.

In fact, gold has already regained its losses from earlier this year and is now 32% above its pre-crash level. And GDX is 105% higher than it was before the crash.

That’s why I’ve been telling my readers that this could be a gold bull market for the ages.

And it’s not too late to get in.

The first step is owning physical gold. After that, consider taking a position in the VanEck Vectors Gold Miners ETF (GDX). As the price of gold rises, gold miners could skyrocket even higher.

But if you’re looking for the best way to invest in gold, Legacy Research cofounder and legendary gold investor Doug Casey recently revealed how he built his gold fortune.

He’ll tell you all about the method that’s made him a millionaire… and reveal five gold plays set for 10x… 20x… even 50x gains. Just go right here for all the details.