Editor’s Note: Today’s installment of “Big T’s 3-Minute Market Minder” is incredibly important. It’s something you’re not hearing anywhere else in the financial press. And it has enormous ramifications for U.S. stocks, U.S. bonds, and gold.

If you find yourself fretting over the Federal Reserve’s next interest rate decision, learn to appreciate the “Magnet Effect.” Then position yourself for an enormous windfall…

Gold Investors: Get ready for the “Magnet Effect”

From Teeka Tiwari, editor, Palm Beach Confidential: If you’re a gold investor, you should be sending Janet Yellen a thank-you note right now…

The Federal Reserve chair has been talking tough on raising interest rates.

In a much-anticipated speech last week at the central bank’s annual Jackson Hole Summit, Yellen signaled a rate hike could be on the horizon. During her speech, she said…

Indeed, in light of the continued solid performance of the labor market and our outlook for economic activity and inflation, I believe the case for an increase in the federal funds rate has strengthened in recent months.

Her hawkish tone pointed to a rate increase… And historically, a rate hike would be bad news for gold prices. But not this time.  Here’s why…

It’s widely known that gold prices go down when interest rates go up. Just the threat of a rate hike is enough to send gold shares plummeting. That’s because of something called “carrying costs.”

This concept is important.

For the last 5,000 years, gold has had a negative carry compared to cash and government bonds.

But that’s no longer true.

So for the first time in recorded history, gold has a positive carry when compared to cash and government bonds. That is a profound change.

It’s a big reason why central banks, investment banks, and large money managers have been piling into gold. It’s now cheaper for them to hold gold than it is to hold cash and bonds.

This has pushed up the price of gold and gold stocks. Since the mid-December 2015 lows, gold is up 25.7%. The VanEck Vectors Gold Miners ETF (GDX), which trades large gold stocks, is up 94.2%.

If the Fed normalizes rates too quickly, it could bankrupt the United States.

If rates rise to historic norms, it’s estimated that America’s annual interest payments on the national debt (now over $19 trillion) would quadruple from $223 billion per year to $900 billion. That would suck up one-third of the federal budget.

It would demand immediate and massive tax hikes… and that would in all likelihood sink the country into recession. We know the Fed doesn’t want that.

But what if the Fed raises rates anyway?

We would see gold take a temporary dip as its positive carry is reduced.

This is where Yellen’s “gift” comes in… I call it the “Magnet Effect.”

If the Federal Reserve actually does raise rates, it will act as a magnet. Foreign money that’s desperately seeking some type of yield will pile into U.S. bonds.

This foreign buying would negate the Fed’s actions… sending rates even lower. Remember, as bond prices are bid up, the interest yield you receive falls.

We already have proof of the Magnet Effect at work. 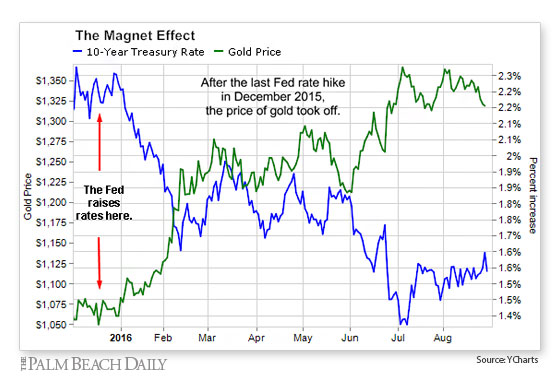 How is that possible?

The Magnet Effect attracted hundreds of billions of dollars in foreign capital. That pushed rates even lower. And as rates went lower, gold’s positive carry went higher. That sparked a massive rally in gold.

We could see something similar happen again…

Bottom line: If the Fed keeps rates low, gold is likely headed higher. And if the Fed raises rates, it could spark an even bigger rally in gold as the “Magnet Effect” pushes gold’s positive carry up.

We may see gold and gold shares take a dip first. But don’t be afraid if that happens. Take advantage of it. It may be your last big buying opportunity of the new gold bull market.