I sat down for a half-dozen media interviews earlier this year where I called for $1,500 per ounce of gold in 2019.

In several cases, the hosts nagged me about my prediction, asking if I would stick with it. I did. In August, it hit my target.

Now, the price has retreated a bit since, but gold’s still flirting with $1,500 per ounce, as I write.

Here’s why I’m writing you today: I believe $1,500 is only the beginning for gold. 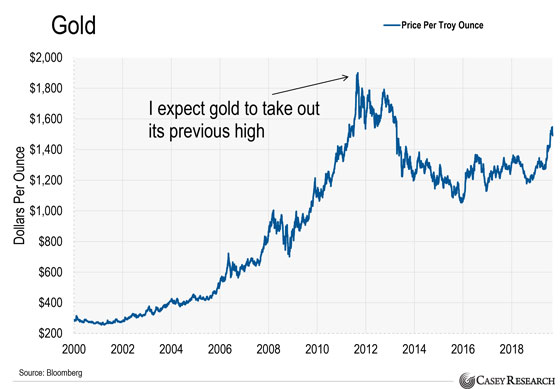 Today, I’ll share why… and how you can start taking advantage…

A Major Gold Rally Is Underway

All of the serious money I’ve made investing came through positioning for a big move and sitting tight. Trading is tough. In and out all the time can work over a short period. But the big gains come from sitting tight and letting the bull market run.

While the Obama administration and the Federal Reserve experimented with radical money policies, gold stayed stuck. Notice in the chart above it didn’t do much after hitting its 2015 low.

What’s bad for gold is unbearable for gold miners. They commit to projects assuming they’ll sell produced gold for $1,500. Then it falls to less than $1,100. That means the project is bankrupt before it pours the first gold ounce.

That period is over.

I can give you a list of anecdotal evidence as proof. Several large mining firms combined this year in order to survive. These were not bidding war takeovers. CEOs got over their egos and merged to avoid losing their companies entirely.

But we need more than strong anecdotes to risk money on the gold sector.

From our view, that’s why the chart of gold is so important. It’s how I determined $1,500 was an important target for gold this year. If it hit that target, which it did, I felt it was a green light to invest more aggressively for higher prices.

The gold chart below goes back to 2014. Notice that after gold hit its low in late 2015 (circled in red), each rally that followed registered a higher low. The pullbacks of 2016 and 2018 (also circled in red) each hit low points higher than the last. To us, this meant it was a matter of time before gold exploded higher. 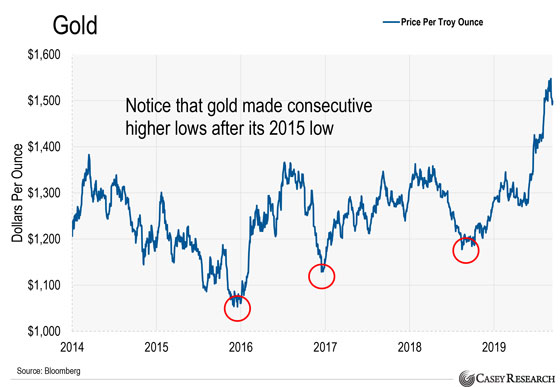 Breaking $1,500 was the first test. Now, I expect it to correct, which is market speak for rest and get ready for the next leg higher.

That next move for gold will catch mainstream asset managers off guard. As I said above, I expect it to eventually take out its 2011 high. That’s why the current pullback in gold is the perfect time to position for what may come next.

Gold Mining Stocks… and the Power of Leverage

If you aren’t familiar with the concept of leverage in gold stocks, here’s a quick example of how powerful it can be…

This is why a small increase in the price of gold can cause a gold stock to soar many times that amount.

Gold more than tripled during this period. But gold stocks more than quadrupled.

As you can see, an increase in the price of gold (even a small one) can lead to huge returns.

Now’s the Time to Take Advantage

Remember, before owning a gold stock, it’s wise to have some physical gold. That’s because gold is a tangible asset that you can hold in your hand. It’s real money, a safe-haven asset, and a way to protect your wealth. It’s survived every financial crisis and will continue to do so.

Then, you can speculate on higher gold prices by buying gold miners, which gives you the chance to multiply your money in a gold bull market.

You can look into an exchange-traded fund (ETF) like the VanEck Vectors Gold Miners ETF (GDX), which holds a basket of gold stocks.

But the best way to take advantage is by following our advice in my newsletter Strategic Investor. In our core portfolio we have a world-class gold miner that shot up 56% during gold’s move from May to September of this year. This is no penny stock. This multibillion-dollar miner turns a profit and pays a dividend.

Just remember, gold stocks are extremely volatile. Like in any industry, the stocks of stronger companies will go up more than those of the weaker ones. As always, never bet more money than you can afford to lose.

It only takes a small stake in the right companies to make a fortune as gold prices rise.

P.S. I also recommend you watch this short video featuring our founder, legendary speculator Doug Casey. In it, Doug explains exactly what’s going on in the gold market right now.

Thanks in part to a shocking new rule—the first of its kind in 45 years—gold is making international headlines. The last time we saw anything like this, gold took off. Today, it’s happening once again… And it’s set off a buying frenzy… a “gold panic” unlike anything we’ve seen since the early 1970s.

Click here for the full story… including the details of five of my explosive gold stocks in Strategic Investor—the best way to play the coming boom.