For the first time since 1999, I’m buying sizable quantities of gold for my personal account.

As you may know, my publisher doesn’t allow me to own stocks I recommend to you. It’s an important policy that prevents conflicts of interest.

So instead of buying my three favorite gold stocks, I’ve made the decision to buy SPDR Gold Shares (GLD) for my own account. I think I’ll at least double my money over the next 18 months.

While that’s a great return, it’s nothing compared to how much I think you can make from my top gold stock ideas.

Since I first recommended them on April 2, they’re up an average 23%.

And based on how high I believe these ideas can go, I calculate I’m giving up about $3 million in potential profits by not buying them.

Why would I do that?

It all has to do with something that happened to me during the 2017 crypto bull market.

At the time, I made more money than I will ever be able to spend. Having created that much money that quickly forced me to get clear on why I should continue to work.

Money was no longer a primary driver. I had to do some deep introspection to figure out what I wanted to do next.

During this time, a billionaire offered me the opportunity to manage $100 million for him and his friends. It was an offer that would’ve netted me tens of millions of dollars in fees and incentives… and yet, I turned him down.

What I came to discover was that making more money just for the sake of having more didn’t move me. I realized that helping my subscribers reach their financial goals satisfied me in a way that money never could.

Let me be clear: I’m still a capitalist. I enjoy the freedom money gives me. But I understood I could follow my own script and do something that fed my soul and my bank account. That’s why I chose to stay at Palm Beach Research Group.

Sure, an extra $3 million is nothing to sneeze at… But at the end of the day, even if it was $30 million, it wouldn’t change how I live my life.

But it can absolutely change your life… and that’s why I’m willing to forgo those potential profits.

Gold Thrives Under These Conditions

Since the World Health Organization declared coronavirus a pandemic on March 11, global markets have crashed. From peak to trough, we saw the S&P 500 drop as much as 34%.

The unprecedented collapse of the global economy due to this coronavirus pandemic calls for an unprecedented solution. Which is why the whole world is about to embark on a money-printing odyssey no one has ever seen before.

My team estimates the governments of the United States, Europe, and China will spend nearly $6 trillion combined in stimulus money to rescue the global economy. That’s a very conservative estimate.

This massive infusion of “printed” money will create inflation. If interest rates don’t rise as inflation rises, then you get something called “negative real rates.” I’ll explain what that is… and why gold always rallies when real rates go negative.

We believe interest rates won’t rise because the Federal Reserve will manipulate them lower by buying bonds in the open market.

Remember, demand for bonds drives interest rates lower. The Fed has to keep interest low so the federal government can service its $23 trillion (and growing) federal debt.

What Are Real Rates?

The real rate is the interest rate return you receive on the 10-year government bond minus the current inflation rate.

In normal times, the real rate of return is positive. That means the yield investors earn on government bonds is greater than inflation.

As long as you’re earning a positive real yield, you’re maintaining and growing your purchasing power.

But when real rates go negative, you’re no longer maintaining your purchasing power. So as central banks around the world print more money, they’ll dilute the value of their currencies.

What that means is it will take more dollars to buy the same amount of goods. At the same time, central banks will keep interest rates low to help their respective governments service their debts.

This combination will create a long period of negative real rates.

When real rates go negative (like they are now, globally), smart money flees bonds and paper money as they drop in value.

Instead, they go for the protection of gold, which rises in value and offsets the losses from holding paper money.

As you can see in the chart below, while real rates have declined, gold prices have zoomed higher. 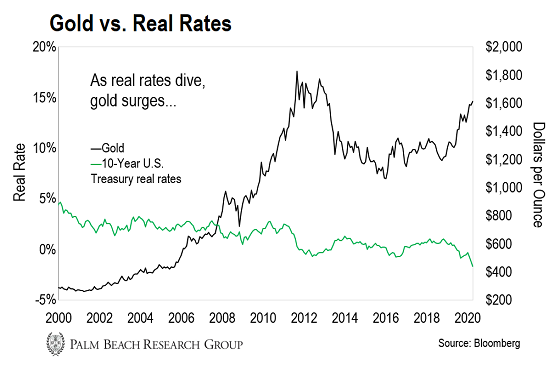 During a gold bull market, the real magic happens when you make the choice to own gold stocks instead of physical gold. It all has to do with leverage. As I’ll explain in a moment, when gold prices go up, gold stocks go up much, much more than physical gold prices.

Here’s why that happens…

We saw this leverage at work from 2000–07, when real rates declined 65%. This sparked the next huge bull market in gold.

The average gold stock – as measured by the MVIS Global Junior Gold Miners Index – surged as much as 611% higher. And certain outlier stocks did even better…

In my flagship Palm Beach Letter service, I’ve put together a report with three gold stocks I believe can go up 150–350% over the next 18 months. (Paid-up subscribers can read our April issue here.)

As I mentioned above, they’re up an average 23%. So I’ve already deprived myself of close to a quarter of a million dollars in potential gains by not buying them, so I can make the ideas available for my subscribers.

Now, out of fairness to my subscribers, I can’t give out the names of these three gold stocks. But if you want to learn more about becoming a subscriber, click here.

And if you want exposure to the mining sector, consider the VanEck Vectors Gold Miners ETF (GDX). It holds a basket of some of the world’s largest gold miners.

P.S. Gold isn’t the only thing I’m bullish on. There’s another industry that is about to explode, too. In fact, I’m calling it my No. 1 investment of the decade.