Most of the time, gold is an atrocious investment.

It pays no dividend. It has limited industrial uses. And it can go through long stretches of time where its price goes nowhere.

That’s why at PBRG, we treat gold and other precious metals as disaster insurance. They’re like a chaos hedge against Armageddon. So we generally recommend you allocate no more than 5% of your portfolio to this asset class.

But under certain conditions, gold prices soar. And along with them, certain gold stocks explode even higher.

Today, we’re seeing a similar setup in gold to the one during the 2007–08 financial crisis.

So for the first time in more than 20 years, I’m going back into the gold market… and buying sizable quantities of gold for my personal account.

The Beast From Wuhan

On January 5, the World Health Organization (WHO) reported that Wuhan, China, was seeing a “cluster of pneumonia cases of unknown cause.”

Today, there are more than 1 million global cases and nearly 70,000 deaths.

Since the WHO declared coronavirus a pandemic on March 11, global markets have crashed. For instance, the S&P 500 is down about 10% since then.

The unprecedented collapse of the global economy due to this coronavirus pandemic calls for an unprecedented solution. Which is why the whole world is about to embark on a money-printing odyssey no one has ever seen before.

My team estimates the governments of the United States, Europe, and China will spend nearly $6 trillion combined in stimulus money to rescue the global economy.

Friends, do you really think all of that money is free?

To be clear, the U.S. and Europe are backed by massive and diverse economies possessing unmatched, gigantic earnings power. So I don’t expect inflation to reach the astronomical levels we saw in Zimbabwe and Venezuela.

What I’m suggesting is, central banks will dilute money so much that, 10 years from now… the purchasing power of their currency will be cut in half.

By cutting the real value of money in half, they’ll reduce their debt burden.

This is an old playbook governments have been using and perfecting for centuries.

What Inflation Means for Gold

In normal times, investors can make a “real” yield. That means the yield they earn on a government bond is greater than inflation.

As long as you’re earning a positive real yield, you’re maintaining and growing your purchasing power.

But when real yields go negative, you’re no longer maintaining your purchasing power. That’s exactly how the world’s central banks will handle their debts.

They’ll dilute the value of their respective paper currencies. And that’s where the opportunity lies…

When real returns go negative (like they are now, globally), smart money flees bonds and paper money as they drop in value.

Instead, they go for the protection of gold, which rises in value and offsets the losses from holding paper money… 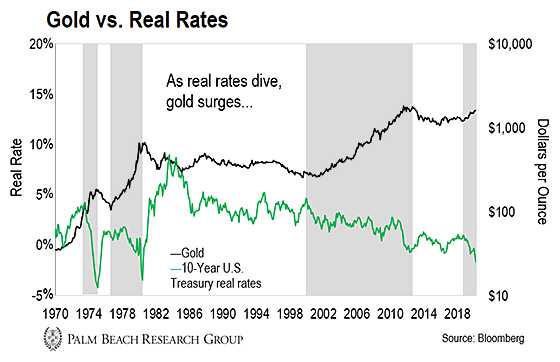 As real rates have declined, gold prices have zoomed higher. Gold has risen as much as 30% since June 2019. But certain gold stocks will do even better than that…

You see, gold stocks are leveraged to gold prices. So when gold goes up, the stock goes up even more.

The average gold stock – as measured by the MVIS Global Junior Gold Miners Index – surged as much as 611% higher. And certain outlier stocks did even better…

Here’s What to Do Now

Remember, when the Fed and other central banks turn on their printing presses and real rates go negative… investors flee paper money and bonds.

They flock to gold to protect their buying power. And then, gold surges and ignites a huge rally in gold stocks.

This unique series of events is rare. It doesn’t happen very often. But when it does, it can make you life-changing gains.

In my flagship Palm Beach Letter service, I’ve put together a report with three gold stocks I believe can go up 150-350% over the next 18 months. (Paid-up subscribers can read our April issue here.)

As you may know, my publisher won’t allow me to own stocks I recommend to you. It’s an important policy that prevents conflicts of interest.

So instead of buying my three favorite gold stocks, I’ve made the decision to buy SPDR Gold Shares (GLD) for my own account…

Based on how high I believe my top three gold picks can go, I calculate I’m giving up about $3 million in potential profits.

Why would I do that?

You see, when I turned down an offer to manage a $100 million hedge fund back in late 2017, I made a commitment to always give you my best ideas – even if they come at my own expense.

I know the value I provide you will come back to me in other ways.

Now, out of fairness to my paying subscribers, I can’t give out my three favorite gold stocks.

But if you’re interested in obtaining a copy of the report, I encourage you to learn more about my Palm Beach Letter service right here…