Ever since I was 12, I knew I wanted to work on Wall Street.

I grew up in the United Kingdom’s foster care system. If you’re not familiar with the U.K., its government is socialist.

I don’t mean “socialist” like China, Venezuela, or the former Soviet Union. Instead, the U.K. is what political scientists call a “welfare state.”

In a welfare state, the government plays an active role in protecting its citizens’ economic and social well-being.

Most developed nations, including the United States, offer some form of welfare protections to their citizens.

But in the U.K., the state acts like your mom and dad. It makes virtually all your decisions. And when the state takes care of everyone, the quality of care decreases.

I know from experience.

One of the foster homes I grew up in housed me in a cramped, unheated room on top of a garage. It was so cold, I could watch my breath coil into a frigid mist at night.

My future looked as bleak and cold as my tiny room. I soon realized no one was coming to rescue me. That meant I had to rescue myself.

So, I decided to move to America to build a better life.

I came to the United States in 1987 when I was just a teenager.

Like tens of millions of immigrants before me, I arrived in New York with nothing but the clothes I was wearing, $150 in my pocket, and a head full of dreams.

By the time I was 18, I had wrangled an introduction with a hiring manager at Lehman Brothers named Frank. He had zero interest in me until I told him I’d work for free.

Let me repeat that: I told him I’d work for free.

I knew the education I’d receive at Lehman Brothers would transform my financial life more than any university education ever could.

Frank still offered to pay me $4 per hour. And while I was working 50 hours a week… they only paid me for 29 hours so they could skimp on giving me benefits.

I didn’t care. I wasn’t there for the $4 per hour. I was there to learn all I could about Wall Street and the inner workings of financial markets.

Within 3 years, I became the youngest-ever vice president at Shearson Lehman.

I am living proof of the American Dream.

But friends, that American Dream is currently dying a quiet death…

We’ve traded the notion of hard work and free enterprise for the U.K.’s welfare state.

But we don’t call it that in the U.S.

Yes, we still have the trappings of a free enterprise system… But a more insidious concept has wormed its way into our lives over the past few decades.

You can see it with today’s inflation raising prices at the grocery store and gas pump. But that’s just one symptom of what I call a “New Order of Money.”

On this Labor Day, I want to pull back the curtain and show you the rot eating away at the fabric of the American Dream.

It’s the same rot I saw growing up hungry and cold in the U.K.

How “Free Lunch Theory” Led to a New Order of Money

While there are all sorts of technical reasons for inflation, the major driver is constant money printing by the world’s governments.

This idea of continuous money printing rests on Modern Monetary Theory, or MMT.

Disciples of MMT believe the government can spend as much as it wants, whenever it wants, without worrying about fiscal costs.

To prevent an economic crisis, Bernanke suggested throwing money from helicopters. It would be a sort of “quantitative easing” for the masses.

Friends, MMT is nothing more than Free Lunch Theory (FLT).

On the surface, FLT sounds simple. And like many bad ideas, it’s cloaked in compassion for the needy… with no regard for its disastrous results.

Simply put, FLT argues that the government should give every American a basic monthly income check – regardless of whether they need it.

People can use the money for anything. No strings attached.

Instead of financing it with debt, the government would simply print more money.

Just think about it…

But in a world with the same number of loaves of bread… the same amount of gasoline produced… the prices of everyday goods would blow through the roof.

That’s why inflation is at record highs now.

This poisonous concept is driving the unprecedented expansion in the money supply we’ve seen over the past few years. 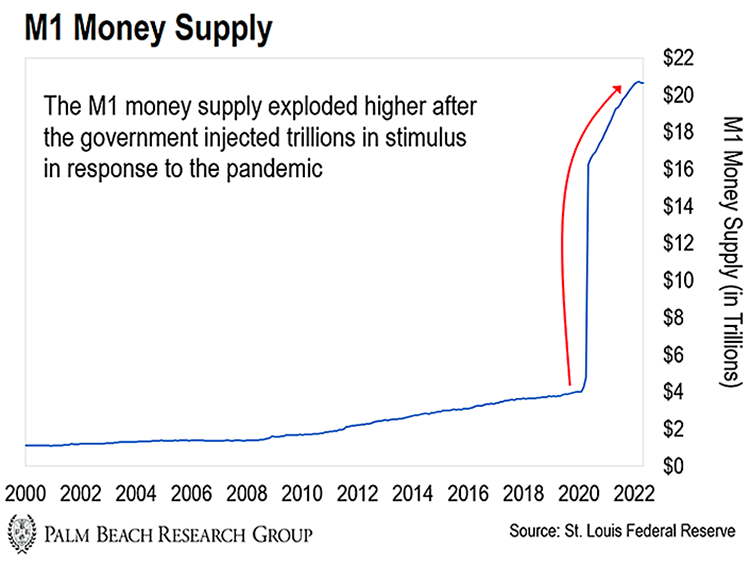 Let me be very clear: This level of monetary expansion has never happened before in the United States. And it shows no signs of stopping.

The recently signed $737 billion Inflation Reduction Act is the latest proof that the government will continue spending like a drunken sailor.

The genie is out of the bottle. Nobody can stuff it back in.

That’s why I say we’re in a New Order of Money… Because we have never seen this before.

And in this New Order, you need to think outside the box if you want to outpace inflation and build a nest egg big enough to retire comfortably.

Under this new monetary regime, the old playbook of working hard and buying blue chips isn’t enough to give you a comfortable and dignified retirement.

Inflation is outstripping the 100-year average return of stocks.

That means if you’re relying on the S&P 500 index to bail you out… you’re making a decision that could doom you to a retirement far below the standard of living you enjoy today.

How to Keep the American Spirit Alive

Friends, I’m not trying to scare you. I am trying to prepare you. You need to know that we’ll continue to see rampant inflation in this New Order of Money.

So if this New Order of Money has hurt your pocketbook, it isn’t your fault.

But once you understand what’s going on, how you fare in the future will be your fault… if you don’t take the right actions today.

Unfortunately, I know what’s coming next. It’s not going to be pretty.

But the good news is that during my years in the financial markets, I’ve learned to make what I call “Maverick Investments.”

I’ll explain what these Maverick Investments are in tomorrow’s Daily. But longtime readers will be familiar with them.

They are assets (like bitcoin) that go against conventional thinking… but could lead to massive, asymmetric returns. These are the kind of returns that create decades’ worth of market gains in just a few years.

So on this Labor Day, I’ll continue to honor the American spirit of free enterprise.

That ideal – shared by the millions of Americans who still embrace it – is what drew me to this country in the first place.

And that’s why I continue to fight for those of us who still believe in this “old-fashioned” idea of free enterprise.

We get to remake America by remaking ourselves into people who won’t be victimized by this New Order of Money.

Our duty to ourselves, our families, our communities, and our country is to protect and grow our individual wealth.

That’s why I’ll do everything I can to share everything you need to know so you can navigate this New Order of Money.

So you come out of it far wealthier than when you went into it.