From Teeka Tiwari, editor, The Palm Beach Letter: Do you have your thank-you cards ready?

Make sure you send one to Janet Yellen.

She is giving you the mother of all gifts.

On September 1, I warned you that Yellen would talk tough on rates. I said there was even a shot she might raise rates at the September 21 Federal Open Market Committee (FOMC) meeting.

I wrote that the threat of a rate hike could send gold shares plummeting. Since then, we’ve seen the NYSE Arca Gold Bugs Index (HUI) drop by about 8%. I wouldn’t be surprised if it dropped another 10-15%.

For selfish reasons, I hope it does.

If you’re long-term bullish on gold, then you should be as giddy as I am about this pullback. I’ve got to tell you, I’m rooting for a drop to $1,245 on gold. But I don’t think I am going to be that lucky.

I am relishing the opportunity to jump in and scoop up a handful of junior mining stocks for my own account. (I didn’t get enough personal exposure earlier this year.) I already picked up a little physical silver and am looking forward to adding some physical gold.

Recently, I told you that this sell-off could be the last major buying opportunity you’d see in this new gold bull market… and it’s all because of something I call the “Magnet Effect.”

The Magnet Effect is a simple idea: As the Fed raises rates, it acts like a magnet sucking in foreign money to the United States. That’s because rates in other countries are much lower than ours.

With a spread that large, you can see why every time Yellen raises rates it just sucks more money into our markets. Now, here’s the funny thing about bonds. When more people buy them, the interest rate they pay declines.

So even though the Fed wants rates to rise, the Magnet Effect will keep rates low.

But after the dust settled, interest rates, as measured by the 10-Year Treasury, plunged 32%. They dropped from 2.3% to 1.56%. Meanwhile, the average gold stock jumped 94% (see chart below). 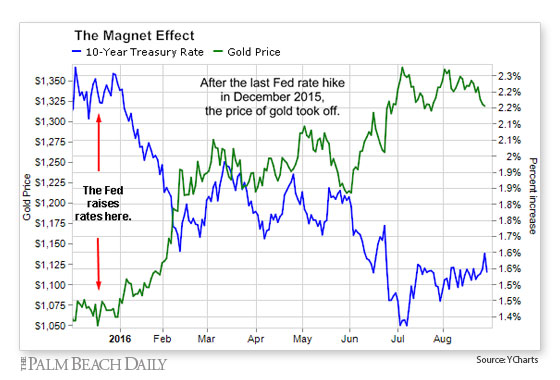 How did this happen?

It was the Magnet Effect. By making rates so high, hundreds of billions of foreign dollars came flooding into our bond market. Remember, if bond buyers are more aggressive than bond sellers, then interest rates go down.

If we follow the playbook of the last rate raise, then gold stocks will get roughed up for the next four-12 weeks before the Magnet Effect starts to turn things around.

What you want to do is use the sell-off as an opportunity to increase your gold holdings (while still respecting your position-size limits).

Bottom line: No matter how rough it gets, do not give into panic and despair. Stay rational. Hold your gold investments and you’ll make an absolute killing.