When Wall Street tells you to do one thing, you should do the opposite…

Most people don’t know this… but Wall Street uses coded language to pull the wool over the eyes of ordinary investors.

It may seem difficult at first. But the code is actually easy to break if you know what to look for: If Wall Street says one thing, you should probably do another.

We showed you how this code works earlier this year. When mutual funds try to sell you a “value” exchange-traded fund (ETF), you’re getting anything but…

These funds are made up of stocks with low volatility. They’re considered ultra-safe. The trade-off is that low-beta funds typically have lower returns than the market…

Nevertheless, investors are flocking to these funds.

Nearly $125 billion has flowed into ETFs so far in 2017—that’s the most ever in the first three months of a year.

Most of that money went into overpriced, passive index funds, but a good chunk of it has also gone into low-beta funds.

If you’ve been following the Street as long as we have, you’d know that’s code for “this fund has some big hidden risks.”

Right now, these funds are flying into dangerous territory (more on that in a moment).

So when you hear Wall Street preaching the virtues of “low-beta funds with high returns,” you should be wary…

Instead, grab the Daily and follow our safe and profitable ideas…

A low-beta fund is the same as a low-return or low-volatility fund. These funds are made up of stocks that have small price movements.

Some funds also have “stable” in their name. If it does, you should look very closely at its holdings.

If it’s a stable money market fund or a short-term Treasury fund, that’s fine. Just know that you won’t make much more than 1% on these investments.

Not all of these funds hold “stable” investments. In fact, some hold stocks and risky bonds.

Wall Street has called these “low-volatility funds” for years… but investors eventually caught on. So they rebranded them “low-beta” funds.

That sounds a lot fancier. But don’t be fooled by the highfalutin language.

Low-beta stocks generally don’t keep up with a rising market.

However, these funds are ripping right now… and it’s not because they’re safe.

With interest rates at historic lows, investors are in a desperate search for yield. So they’re piling into blue-chip dividend payers. And that’s boosting these funds’ values.

This bubble will eventually pop.

Finding the Right Kind of Volatility

Here’s what you’ll never hear from Wall Street: Volatility in itself isn’t a bad thing.

For instance, bitcoin has been very volatile over the past year. It’s been up more than 10% some days… and down more than 10% on others.

Long-term, though, bitcoin holders don’t care. It’s more than doubled since last year, going from $500 to over $1,100 per coin. That type of volatility is good.

At the Daily, we’re only concerned about downside volatility that loses us money. And just because a stock or fund has low volatility doesn’t mean it won’t be a money-loser.

Let’s say a position loses just 0.2% per day. That seems like a small, predictable move. But it’s a loser because those small losses compound over time.

Of course, this is a dramatization, but it shows you how dangerous “low-volatility” stocks can actually be.

Don’t let these “low-vol., low-beta” funds lull you to sleep. They’ll slowly bleed you to death…

Check your portfolio right now to see if any of these types of funds are lurking inside. If you see code words like “low beta,” “smart beta,” “min. vol.,” or “stable” in the fund’s name, you may be holding a ticking time bomb.

P.S. If you’re looking to add safe stocks to your portfolio, check out our PBD Elite 25. Our list of 25 companies has beaten the S&P 500 by 14% annually over the past 20 years. You can get the free full list right here.

It looks like a trade war is already underway…

Protectionist measures passed by G20 countries nearly doubled in 2016. (The G20 is an international forum for governments and central bank governors from 20 major economies, including the United States.)

As you can see in the chart below, protectionist measures have been on the rise since 2010. But they really accelerated last year. 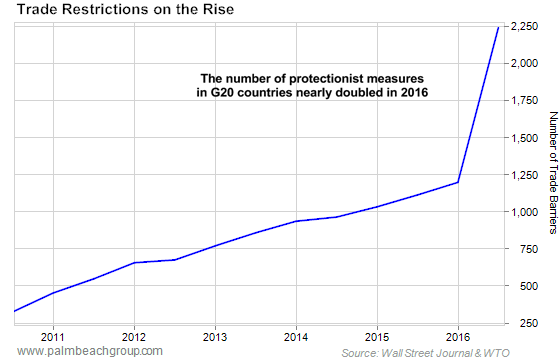 We call this trend “peak globalization,” and we’ve been following it for months.

[Peak globalization refers to a decline in global trade spurred largely by populist movements across the world.]

Long term, we think a decline in global trade is bad for the U.S. economy and our investments.

In the meantime, if you’re looking to profit from this trend, we suggest you take a look at our America First Portfolio.

With success comes setbacks. And we’re seeing that in bitcoin…

The cryptocurrency’s growing popularity has created bottlenecks in the system—and that’s slowing down transaction times.

One faction of programmers wants to increase transaction times by changing bitcoin’s code. That would allow the network to scale up. But another faction doesn’t want to change the code. That will allow them to retain control over bitcoin’s growth rate.

PBL editor Teeka “Big T” Tiwari says this internal “nerd war” is causing some volatility in bitcoin. It could also potentially lead to a bitcoin “spin-off.”

In today’s must-see 3-Minute Market Minder (transcript included), Big T says some volatility over this potential split is expected. In fact, he saw it happen last year with a cryptocurrency in our portfolio… and it’s up more than 413% since then…

In it, you’ll find brand-new evidence that gold could be in for a massive move higher. The move could start as soon as this week. Please stop what you’re doing and watch this urgent video right now. Click here. 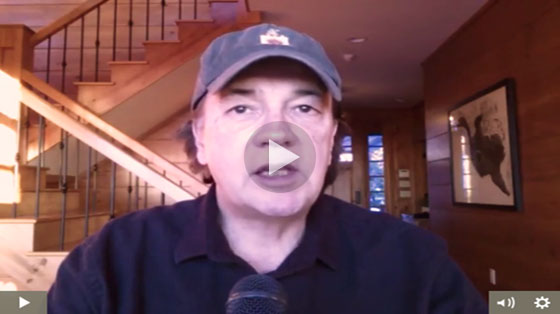