In October 2011, I got to witness something very few people had ever seen.

I was at NASA’s Ames Research campus in Mountain View, California. That’s where I watched a demonstration of an early version of Google’s self-driving car.

It was a modified Toyota Prius with a whole computer system in the trunk. You can see the prototype below. 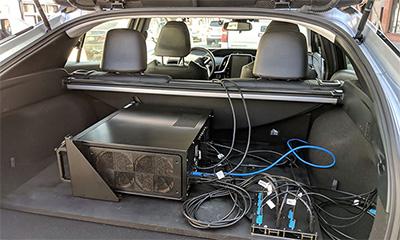 The amount of tech bursting out of the car might have elicited more confusion than excitement from any regular person.

But even back then, I knew that the market for self-driving vehicles would see exponential growth. More people just needed to see the actual technology in action.

Fortunately, we didn’t have to wait too long…

A whole slew of startups, major tech companies, and legacy carmakers have since launched their own bids in this rapidly growing sector.

From unmanned fighter jets to self-driving taxis, autonomous vehicles have steadily evolved into one of this decade’s most exciting tech trends.

But Wall Street certainly didn’t see the transformative potential of the technology way back in 2011. For many years, statements like the ones below circulated in the mainstream media…

“The press has finally decided to acknowledge that the autonomous car isn’t just around the corner.”

“Self-driving cars might never be able to drive themselves”…

But while the media was still struggling to understand this phenomenon… I knew something the critics didn’t.

Electric vehicles were on the verge of a major inflection point. And over the past few years… we’ve seen the whole autonomous driving space finally take off.

Self-driving taxis are already live in several American cities. Legacy automakers like Volkswagen have worked to commercialize their own self-driving software.

Autonomous vehicles are gradually becoming a normal occurrence on our streets now.

And out of the many players vying for a dominant position in the industry, one company has risen above the competition. And it’s leading the way for the mass adoption of autonomous driving technology today.

The Industry Leader in EVs

Back in November of 2018, I made one of the most controversial recommendations of my career… I told my readers to buy stock in Tesla.

It’s easy to think of Tesla as an industry leader now. But Wall Street was wary of Tesla back then. Most investors would have laughed you out of the room for recommending it.

Many investors still saw Tesla as a risky proposition.

But I saw a different story taking shape… And I knew that it was on the verge of a major inflection point.

That year, Tesla shipped over 245,000 cars to consumers – including its economy-class Model 3 and its Model Y luxury sedan. That figure more than doubled the 101,312 vehicles it shipped in 2017.

Those sales milestones fueled Tesla’s growth. And the company even managed a $139 million profit in the fourth quarter of 2018.

Analysts had bet Tesla wouldn’t turn a profit for another decade. But instead, it started to consistently beat analyst expectations.

Tesla was on the verge of explosive growth.

Here’s what I said in my initial write-up:

When I think about Tesla, I see one of the leading AI companies in the world.

Not only does Tesla have the most advanced AI software, it has access and control of its AI network… And that network is its fleet of cars driven by its customers around the world.

Real-world data is the single-most valuable asset necessary to train an AI, and no other company on the planet has the network in place, nor the data, to compete with Tesla.

Tesla was already getting close to perfecting its self-driving technology. And in October 2020, it released a major update to its self-driving software. It launched a beta version directly to a small cohort of “expert and careful drivers.”

And the results were phenomenal.

And Tesla is using all the data it collects to keep refining its technology. As autopilot features improve, it’s setting a standard for how autonomous driving should work across the whole industry.

The entire self-driving space would soon grow into a multibillion-dollar industry. And Tesla would be a huge part of that shift.

What I want readers to take away from this is simple…

We can’t trust Wall Street or the media to help us recognize truly exponential opportunities. Instead, it’s important to focus on the fundamentals.

What innovations is the company bringing to market? Is it leading its nearest competitors? Is it setting industry standards?

That’s how we can find the stocks that are truly leading their respective industries.

But unfortunately, opportunities like Tesla… where the biggest growth happened AFTER it reached the public markets… are becoming few and far between.

The Next Crop of Silicon Valley Startups

Tesla’s innovations are fueling the self-driving car trend, which is operating at the bleeding edge of artificial intelligence, machine learning, and semiconductor technology.

But the chance to invest in a company just like Tesla… at a great value… while its biggest growth days are still ahead… is almost gone for retail investors.

After all, Tesla saw its biggest growth AFTER it went public. But sadly, that’s not the case with so many initial public offerings (IPOs) out there right now.

Most of the profits go to private or institutional investors who invest while the company is still private… before retail investors even have the chance to get in.

It’s not fair. The system is rigged against us. That’s why I’ve spent years searching for the best way to reach life-changing returns as a retail investor.

And I’m happy to tell you that the chance to invest in the next Tesla or Amazon hasn’t disappeared completely.

In fact, I’ve found a small sector of tech companies that are still enabling regular investors to get in while the biggest gains are possible.

I call them “Penny IPOs.”

That’s why I’m returning to Silicon Valley… I’m on a mission to uncover the best of these Penny IPOs. I’m crafting a list of the top companies in this space.

And tomorrow at 8 p.m. ET, I’ll share all about it at my special event, Silicon Valley “Unlocked.”

If you’d like to attend, go right here to RSVP. I’ll even be giving away the name of my top private Penny IPO to attendees.

I’ll look forward to seeing you there!