From Mark Ford, founder, Palm Beach Research Group: With a net worth of $66 billion, Warren Buffett is the second-richest man in America.

Most people know Buffett as a great investor.

Why? Early in his investing career, he realized that there were certain businesses that had strategic advantages—advantages that allowed them to continue to grow bigger every decade, crushing their competition over time. He figured that if he could buy those businesses when the price was right, the market would guarantee him huge, long-term profits.

And that’s exactly what he did.

Berkshire Hathaway, the company Buffett took control of in 1965 to buy such companies, has produced an average 19.4% annual return on investment (ROI) since then.

But if Buffett’s system is so great, why doesn’t every investor—professional or private—follow it?

I believe I know the answer.

The investment advisory industry—at least the way it is practiced by more than 95% of the professional community—is not geared toward long-term wealth.

I can hear some of you shouting already. “I don’t care about long-term wealth. I want to start making good money now. In fact, I want to get rich now!”

I hear you. But the fact is that you can’t get rich quickly in the stock market unless you are both extremely foolish and also extremely lucky. But what you can do, if you are smart, is generate a reasonable amount of short-term income while you are building up a retirement nest egg that will cover all of your lifestyle expenses after you stop working.

The Power of Compounding

Of all of the many investment strategies that exist, why did Albert Einstein call compounding “the eighth wonder of the world”?

It’s because nothing else has the power to create great wealth so surely.

Compounding works like this: You put your money in an investment that pays a return. At the end of the year, you take that return and reinvest it with your original stake. Your dividend (or interest) earns a return, too. This gives you a bigger compounded return in the next year.

Compounding is slow and boring at first, but as time passes, the dividends get exponentially larger. Eventually, you wake up to discover that you are making huge dividends every year while your account grows to an enormous size.

A snowball is the best analogy for compounding. As you roll the ball through the snow, the surface area gets bigger. The more surface area on the snowball, the more snow it picks up. The snowball gains mass slowly at first… but pretty soon, it’s so large you can’t move it.

Here’s an example. An 18-year-old girl puts $2,000 into an account each year for seven years. Then she stops. She never puts another nickel in the account. Her $14,000 sits there, earning interest at a rate of 10% each year.

How much will the account be worth when she is ready to retire at 65?

The answer is $944,641—almost a million dollars. She will have become a wealthy woman at retirement simply because she invested a modest amount of money and allowed it to compound over time.

Not only is compounding the best way to build long-term wealth, but it is also the easiest. You can take full advantage of compounding without watching the markets every day or setting stop losses or hedging your bets. The only thing that you must ask is what kind of investment or asset class compounds the best.

The Best-Performing Asset of All Time

The answer to that question is easy. Compounding works best with stocks.

Jeremy Siegel is a professor of finance at the Wharton School of the prestigious University of Pennsylvania. He studied the returns of different types of asset classes like cash, gold, Treasury bills, bonds, and stocks over a 211-year time frame.

The results were astonishing. 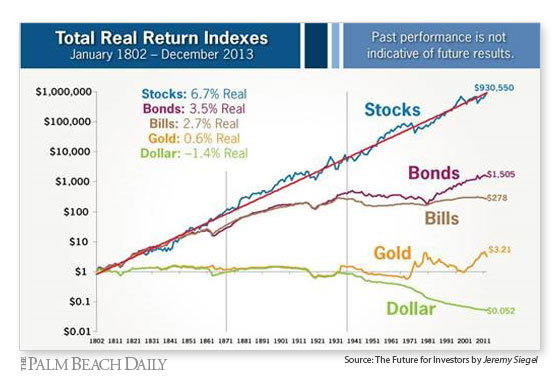 Those are the actual numbers. Yes, cash fell to 5 cents and stocks grew to an astonishing $930,550!

Gold and bonds have an important place in your wealth-building strategy, but when it comes to Legacy investing—i.e., building long-term wealth—stocks are the only way to go.

You may be thinking, “Two hundred years is a long time. After all, the average life expectancy of a U.S. male is 83 years.”

So how would stocks do over a shorter period of time—say, 54 years?

But had you invested that same $3,000 into three companies that have enduring, competitive advantages, your total return would have been $5.08 million using the same time frame!

Here are the stock-by-stock results. One thousand dollars invested turned into a:

Why did these three stocks outperform a broad stock market index fund by four times?

It’s very simple. They all focused on basic human desires and necessities. Things such as food, cigarettes, and fuel. And they all had what Warren Buffett calls enduring competitive advantages.

Siegel’s work confirms what I’ve been saying: To build serious wealth, you need to create—in addition to strategies that bring you shorter-term income and growth—a long-term strategy that takes full advantage of compounding.

The Five Benefits of Investing This Way

To get the full rewards of a long-term strategy, you need to follow some rules. You need to select only very safe and very protected businesses. And you need to stick with them regardless of yearly results.

If you do, you will benefit enormously from a number of things.

The most important of these benefits is, as I said, the power of compound interest. If you have ever looked at a compound interest chart, you’ve noticed that the upward curve of wealth accumulation begins slowly over the first 10 years and then increases rapidly after that. By year 30, the numbers are really enticing.

The second benefit of this long-term time frame is simplicity. When you invest this way, you don’t have to regularly monitor the markets or even worry which way they are going. You can pretty much set up your portfolio and leave it be.

The third benefit is peace of mind. With this sort of strategy, you don’t worry about stock market fluctuations. Not even big ones like we’ve experienced in the last few years. (Buffett says that if they closed the market for five years, he wouldn’t care.) In fact, you are happy when the market declines—even when the stocks you are holding drop.

The fourth benefit is that a portfolio like this prevents you from paying unnecessary fees to money managers, brokers, and financial planners. Over time, the fees siphoned away by these professionals erode your wealth significantly.

Fifth, investing in stocks this way will keep you from being too conservative with your money. One of the greatest risks you run is losing money to inflation in overly conservative investments such as cash, CDs, money market funds, and bonds. By investing in the best companies in the world, you’ll grow your money at much higher rates of return. Rates that beat the pants off inflation’s wealth-eroding effects.

Since having my own personal Warren Buffett insight, I made some decisions. Five years ago, I created a portfolio of some of the best businesses in the industry and invested millions of dollars in them.

Even if I never work another day in my life, and even if the stock markets crash, the dividends alone from these stocks will still pay me over $100,000 per year.

If you invest this way, you could have a portfolio that could do the same.