Nick’s Note: My colleague Jeff Brown has the ear of important people in Silicon Valley. He’s seeded over 70 private, early-stage tech companies… And he’s a formal advisor to eight tech startups. With Apple set to launch its new iPhone 8 this fall, I reached out to Jeff to find out how you can profit from this big event. Hint: It’s not by buying Apple.

In 2003, Apple introduced its first wireless mouse and keyboard.

And in 2016, Apple removed the headphone jack from the iPhone 7. If you want to listen to music on the smartphone, you need wireless AirPods. 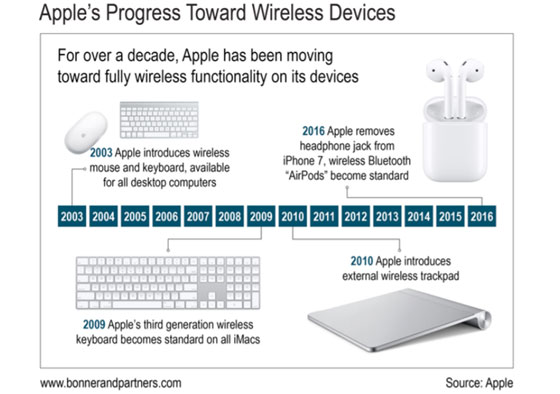 As you can see in the graphic above, Apple is moving toward completely wireless technology.

Here’s why I’m telling you about this trend…

Later this year, Apple will release the latest and most technologically advanced version of its most popular product: the iPhone 8.

The iPhone 8 will almost certainly include wireless charging capabilities when it’s launched sometime this fall.

Behind the complex technology of wireless charging is something quite simple… The ability to charge your electronic devices without power cables.

Imagine being able to come home after being out all day and placing your smartphone on your computer desk.

That’s it. Nothing to plug in, no cables to worry about… Just set down the device, and it charges “magically.”

This will be a game changer for Apple… and will likely boost iPhone sales.

But I’m not writing today to tell you to buy Apple.

You see, there’s a unique way to profit from Apple’s wireless trend… buying the companies that make the microchips Apple uses in its wireless devices.

Broadcom is a good example of how profitable making chips for Apple can be.

Apple released the iPhone 7 in September 2016. And Broadcom’s stock climbed 41% less than a year after the launch.

Broadcom revenue from wireless chips sales came in at $1 billion in the third quarter of 2016. That was up 27% from the previous quarter. 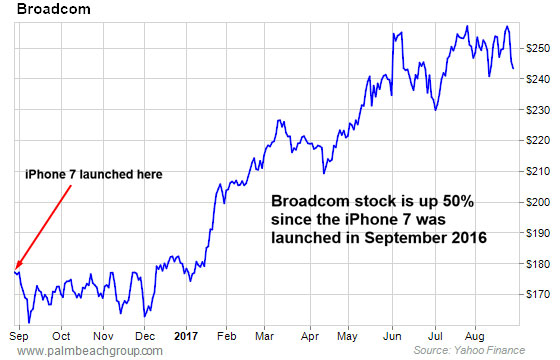 As you can see from the chart above, making chips for Apple’s signature phone can really boost business.

Now, Apple is looking for chipmakers for its wireless charging feature. The company that lands this contract should see its stock push much higher.

Tip of the Iceberg

Some forecasts for Apple’s fourth-quarter 2017 iPhone shipments are coming in at around 90 million units. And each of them will likely carry a wireless charging chip.

But Apple is just the tip of the iceberg.

Since Apple released its very first iPhone in 2007, it’s been a trendsetter for other smartphone makers. Whatever new features Apple adds, others follow.

And the rest of the mobile phone market is much larger than Apple’s shipment volumes.

And wireless charging won’t be confined to just your mobile phone. Any electronic device will be a target for this technology.

Wireless headphones, iPads, smartphones, health tracking devices like heart monitors, and even “smart clothes” will one day charge wirelessly… no power cables at all.

You could even use this technology to continuously heat your morning cup of coffee so that it never gets cold.

Companies that make wireless charging chips will be big winners as this technology becomes the new reality.

Here are a few on my radar: Analog Devices, Dialog Semiconductor, and Texas Instruments.

If wireless charging is anywhere as successful as I think it will be, companies in this sector have the potential to see outsized returns.