Nick’s Note: In yesterday’s Daily, we told you that options are a great strategy to take advantage of market volatility. But most investors think options are risky. With proper asset allocation, we’re comfortable adding smart speculations like options to our toolkit of money-making ideas.

And few know how to use options better or more safely than master trader and PBRG friend Jeff Clark… (Also, don’t miss my May Elite 25 update below.)

Novice traders often don’t take the time to learn the right way to use options. They jump right in—thinking, “I got this.”

They gamble, blow up their accounts, and then walk away penniless and swearing off options forever.

Even experienced traders sometimes get caught up in the allure of fast gains. They overleverage their positions—take a bigger position size than they should—and then take a hit. All the option traders I know, including myself, have blown up their accounts at least once.

But it’s not the options that are risky… it’s the strategy. And when used the right way, options are far less risky than trading stocks.

That’s wrong. That’s the exact opposite of what options were designed for.

The options market was created so investors could reduce risk. Options allow investors to hedge their positions… and risk much less money than they would buying a stock outright.

This is a simple example. And it’s the simplicity that proves my point… Options allow you to risk much less and profit just as much as buying stocks.

Rather than buying one call option for $50 and leaving the remaining $950 in the bank, novice traders take the entire $1,000 and put it into buying more call options.

They end up buying 20 call options to try to get more bang for their buck. What would have been a 100-share purchase has turned into control of 2,000 shares. Instead of using options to reduce risk, they’ve increased their risk 20 times.

Losing 100% on an overleveraged trade would be a disaster. And it’s why most folks think option trading is dangerous. But it’s not dangerous if you trade options the way they were originally intended… as a way to reduce risk.

Limit your option exposure to control just the number of shares you would normally purchase. Leave the rest of the money in the bank. Then it won’t be so bad to lose 100% on an option trade.

It will almost always turn out better than what you could have lost on the stock.

P.S. On May 9, I’m holding a free online training event to show you the No. 1 way to trade the market right now. I call it the “V-Line Breakthrough.” And it’s all about showing you how to profit from a very specific phenomenon during periods of volatility.

Registration is free. And there’s no obligation to buy anything. Plus, as a bonus, all attendees will receive a free special report of my most valuable trading tools. Click here to reserve your spot.

Each month, we update our Elite 25 portfolio. We remove stocks that are too expensive and replace them with stocks that meet our three criteria for elite status.

In April, the Elite 25 continued to outperform the S&P 500. We predict it will continue outperforming as the market whipsaws. It’s during volatile times like now when quality companies really shine.

Three of the five biggest winners were restaurant stocks. Brinker International (which operates Chili’s and Maggiano’s) was the biggest winner… gaining 20% this past month. Denny’s and Ruth’s Hospitality also had double-digit gains.

The worst performer was Skyworks Solutions. It got clobbered 13% on fears of a slowdown in the semiconductor (chipmaker) space.

(Note: The Elite 25 system sometimes removes and adds the same companies more than once. When companies become too expensive, they’re sold. If they become cheap again, the system automatically reacquires them.)

Daily readers are heeding our May 2 warning to avoid certain bonds and certain “bond replacements” during Income Extermination. And they’re hungry for safe investment alternatives…

From David S.: I would be interested in the list of companies to avoid during Income Extermination. Thank you.

From Samuel S.: I think it would be a good idea to list companies to avoid when bonds get exterminated.

From Barbara L.: I would really appreciate a list of stock companies to avoid due to rising interest rates.

From Jeff N.: I was reading the May 2 Daily and would like to know what companies to avoid investing in due to their high amount of debt.

From Keith W.: I would be interested in that list of stocks to avoid during Income Extermination.

Nick’s Reply: Thanks for the feedback, guys. We’re putting our team on it now. Look to the Daily for our blueprint to survive this crisis in the coming weeks.

Today, we want to mail you a copy of Doug’s “dangerous” new book, Totally Incorrect Volume 2. If you feel like political correctness is ruining America, this is a must-read… 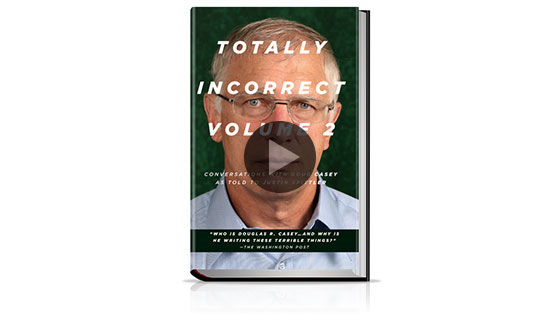