What do we do when we catch a trend, honey?

What do we do when we catch a trend, babe?

What do we do when we catch a trend?

We ride that trend right to the end.

Ed Seykota is one of the world’s greatest traders.

That means he earned an average of 95% per year for more than a decade. Very few people can match that kind of performance.

Here’s what most people probably don’t know about Seykota, though… He’s also a banjo player and singer for a bluegrass band.

And the lyrics to “The Whipsaw Song” contain more wisdom about investing than any other advice you’ll ever hear. (Watch his must-see performance right here.)

Regular Daily readers know I often write about the world’s best traders. I spend hours researching their most profitable ideas to share with you.

(Yesterday, for instance, I told you about George Soros’ contrarian idea of buying stock market bubbles instead of selling them.)

Today, I want to play off Seykota’s theme about riding a trend.

Longtime readers know I’m bullish on the stock market. And if you really want to make money in a bull market, “we ride that trend right to the end.”

But that begs the question: When do we know a trend’s at an end?

That’s what I’m going to show you today. But first…

The Simple Way to Identify Trends

Markets tend to move in trends. The key is to determine which direction the trend is moving: up or down.

One way to determine which way the market is moving is to use trend lines.

Three bounces off the trend line confirms the uptrend. You can see an example of this in the chart below. 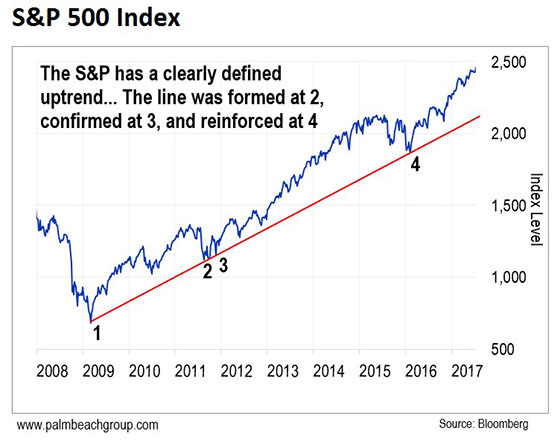 Here’s how you can read the chart…

An uptrend line gains momentum with each new bounce. The stronger the trend line, the more it takes to break it.

Here’s another thing about trend lines… You can also use them as an exit strategy.

How to Know a Trend Has Ended

The beauty of this system is that you won’t be shaken out of the trend too early. And each day the trend line moves up, it protects a little more of your gains.

How has this worked in the past? Pretty well. See the chart below. 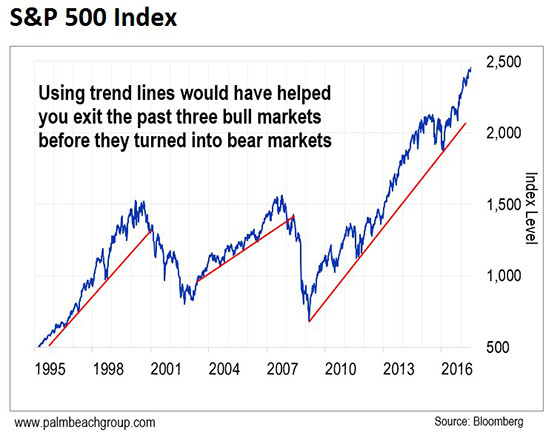 If you followed the trend lines, you would have captured most of the gains from the past three bull markets.

Now, using this strategy wouldn’t have gotten you out at the exact top—you’d have missed it by about 10%. But I’d take 90% of those gains any day.

The current trend is up. And you can “ride that trend right to the end” by continuing to hold quality positions.

As Seykota says, “One good trend pays for them all.”

P.S. What are your thoughts of Ed Seykota’s “The Whipsaw Song”? Share them with us right here.

Just look at these Facebook comments from registered attendees…

“Got in around April. Big profits already.” —Jeff C.

“I’ve been making money as a Bitcoin exchanger for the past couple months. I’m looking for additional strategies to help maximize my positions. Very excited!” —Pj H.

“I’m a veeery curious guy… Thanks for the opportunity!” —Fabio F.

Plus, tonight, Teeka will reveal the name of the “next bitcoin” and give you a chance to claim a portion of the $250,000 Bitcoin Giveaway.

(By the way, some have asked if attendees can really claim a portion of a quarter million dollars’ worth of Bitcoin during the webinar. The answer is yes. Our publisher is setting aside $250,000 that will go to purchasing Bitcoin gift cards that will be sent directly to you.)

Click here to get all the details and register before it’s too late. 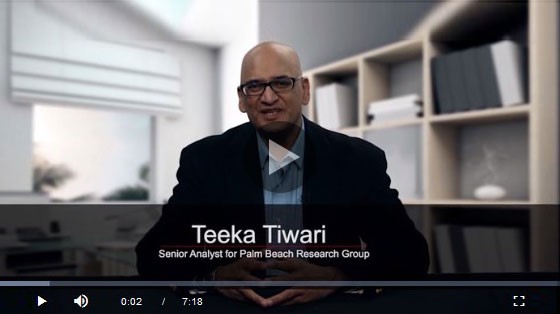