The last time America tried to reverse this trend, it led us to the Great Depression… And the stock market fell over 80%.

If this trend unwinds again, it could devastate your portfolio. Especially if you’re not prepared.

This Trend Has Reached Its Peak

The trend we’re speaking of is globalization.

Global trade has contributed to more than a quarter of the $70 trillion in economic growth we’ve seen since the 1950s.

Today, trade makes up 50% of world GDP. But some economists believe it has peaked (more on that in moment).

As global trade has grown, so have deep divisions among countries and industries.

This divide has gotten too big in some countries… And those left behind want their share of the new wealth created by global trade.

Harvard professor Dani Rodrik puts forth this idea in his 1997 book Has Globalization Gone Too Far?

Rodrik is a leading expert on global trade. More than 20 years ago, he predicted the events that would lead to the victory of a populist presidential candidate like Trump.

In his book, Rodrik said the divide between the haves and have nots in a global economy is inevitable. He calls this crisis the “globalization trilemma.”

You Can’t Have All Three at Once

In theory, most countries want three things at the national level: democracy, sovereignty, and global integration.

But Rodrik says a nation can’t have all three at the same time. At the most, they can only have two.

Think of the old mechanic saying: “You can’t get your car fixed good, fast, and cheap.” You can only get two of the three:

Here’s what he means…

If a nation is sovereign and democratic, global integration (free trade) will eventually erode certain domestic jobs. For example, low-skill jobs (like manufacturing) will go to countries where labor is cheaper.

We’re seeing this in the United States. American jobs have left for countries like China where labor is cheaper. (China also falls into this trilemma. It’s sovereign and globally integrated, but not democratic.)

It’s unlikely that the U.S. government will give up its sovereignty or democracy to bring those jobs back… So, global integration is the odd man out.

That’s why millions of Americans voted for the nationalistic, anti-free-trade candidate Trump for president.

America isn’t the only country with a populist trend… We’re seeing similar uprisings in Europe.

And those movements are coinciding with a decline in world trade. As you can see in the chart below, it’s dropped for the past four years in a row. 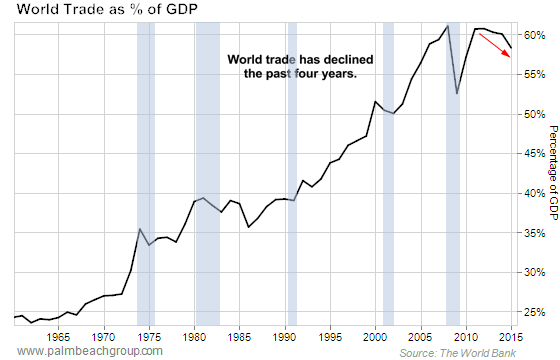 The last big dip in trade was in 2009. That coincided with the Great Recession.

The S&P 500 lost almost half its value during the recession… It also clobbered European and Japanese stocks, each losing 62%. And Chinese stocks took a 74% hit.

When world trade declines, so do stocks…

Global trade has declined six other times over the past 50 years. The United States entered a recession in five of those periods. (Recessions are shaded gray above.)

Here’s why this is so important for investors…

Trump is threatening to pull out of free trade deals and place tariffs on imports.

The last time the U.S. imposed tariffs on a large scale was in 1930, with the Smoot–Hawley Tariff Act.

The Act’s intent was to pull the United States out of the Great Depression. Instead, the Depression lasted another decade.

Tariffs are like taxes. They make imports more expensive. And if we impose tariffs on imports, our trading partners are likely to retaliate with their own (Mexico is threatening to do just this).

In just four years after the Smoot–Hawley Tariff Act, U.S. imports and exports plunged over 60%. The trade war led to the world economy shrinking by 25%. World War II soon followed…

Bottom line: Economies and markets will shrink if globalization has peaked. That has the potential to decimate your portfolio.

But as with any other trend, there will be winners and losers. More on that tomorrow…

If you want to plan a trip to London, now may be a good time…

The British pound (priced in dollars) has been cheaper than it is now only once in the past 40 years. 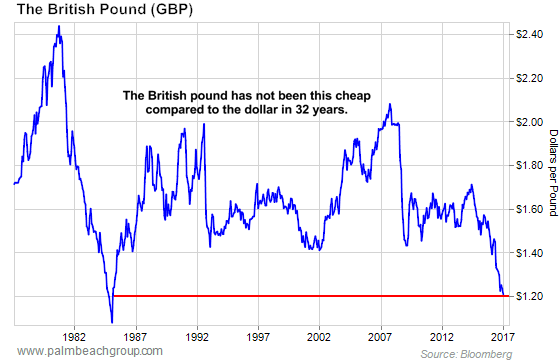 A weaker currency generally allows foreigners to buy your exports more cheaply (and travel to your country less expensively).

But after the initial bump wears off as the country needs to pay more for everything it imports, that eventually slows down the economy.

A weak currency does not lead to long-term growth. If it did, Zimbabwe and Venezuela would be economic powerhouses.

The most recent leg down followed the Brexit vote. The pound went from $1.50 to $1.20 today. That’s a 20% drop in less than seven months—a huge move in the currency market.

War on Cash Rages on in Greece

In Greece, if you don’t show proof of your expenses in the form of a debit or credit card receipt, you won’t be able to use it as a tax write-off. PBL editor Teeka “Big T” Tiwari says this is just the latest government scheme to force people into fiat digital cash.

In today’s must-see 3-Minute Market Minder (transcript included), he explains why this “soft ban” is like a wealth confiscation tax.

After you watch the video, check out one of Teeka’s favorite ways to protect your wealth from the War on Cash right here.

$2 Trillion Bank Bombshell: According to a report quietly released by the U.S. Treasury, some of Wall Street biggest financial institutions (including JPMorgan Chase, Citigroup, Goldman Sachs, Bank of America, and Morgan Stanley) are exposed to $2 trillion in European bank debt. As we told you in our initial warning, if Euro banks go belly-up, we could see a financial crisis worse than 2008.

This Market Is Unraveling: Right now, the Dow Jones Industrial Average sits at 19,885—within 1% of 20,000. Most people would be excited to see the Dow reach this milestone. If it does happen, many investors who are sitting on the sidelines could jump back into stocks. But our friends over at Casey Research say if you’re just obsessing over the Dow, you may be watching the wrong index.

Trade War Salvo Fired: German carmakers are pushing back on Donald Trump’s threats of import duties on the autos they make in Mexico. BMW says it has no reason to change its plans to produce cars south of the border for export to the U.S. and elsewhere. It’s just the latest salvo of the burgeoning trade war we’ve been warning about. We expect to see more trade battles as peak globalization ebbs.

From Glenn N.: Can you recommend a resource for finding historic price-to-earnings (P/E) data? For example, how can I find P/E ratios for Walmart shares in 2007? Thanks.

Nick’s Reply: Hi, Glenn. Thanks for the question. At the PBRG offices, we use a Bloomberg terminal to gather our financial data. But we realize it’s not practical for most people to pay for one of these.

One free resource I like is GuruFocus. Once you sign up for an account, you’ll be able to graph company valuation ratios as far back as 10 years. That’s by far the best free service I could find.

If you want to go back further than 10 years, I’m a fan of YCharts. But you have to pay a monthly fee to use their service.

While CNN and everyone else in the mainstream media are too busy obsessing over Donald Trump’s first term in office, they’re missing a threat way more severe than 2008.

In just three minutes, you can learn what this threat is… It will forever change your thoughts about what’s in store for America in 2017… 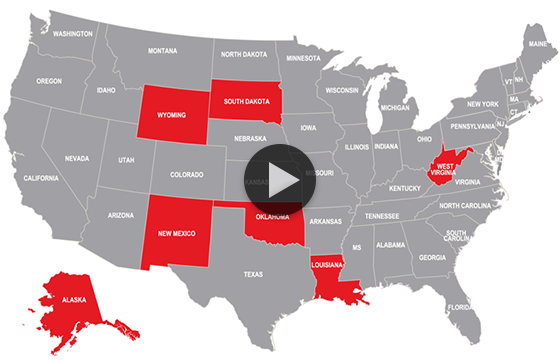