The Kristallnacht pogrom raged through the Jewish ghettoes of Germany. Dozens of Jews were killed. Thousands more were sent to Nazi concentration camps.

Five days after the massacre, British Jewish leaders appealed to their government to rescue children left orphans by the massacre.

It eased immigration restrictions to admit Jewish children from Germany, Austria, and other countries under Nazi occupation. They were smuggled out via train and boat.

It was called Kindertransport (children transport). All told, nearly 10,000 children escaped Nazi occupation under the plan.

They couldn’t take much with them when they fled. Yet they still needed money to pay for essentials once they arrived to safety in Britain.

Leo Metzstein is a survivor of the scheme. He said some of the kids came up with an ingenious plan.

“Lots of the children had little bits of gold sewn into their socks and hidden inside their shoes so they could eat when they got to England,” he said.

A few gold bits were sufficient for the Jewish children to buy food.

But what if you had to flee a repressive government (or for any other reason) and wanted to take your entire life savings with you? How would you do it?

Would you be able to sew it all into your clothes?

What if I told you there was a better way…

What’s the Best Way to Flee With $1 Million?

Let’s say you had $1 million in assets and needed to get out of Dodge right away.

Would you have time to convert your life savings into gold or cash before you fled?

For the sake of argument, let’s say you had $1 million in gold hidden in a safe on your property.

The Feds are en route to your home. And they plan to confiscate whatever they find of value.

Could you sew all that gold into your clothes… like the Jewish children fleeing Nazi repression did?

Remember the crook who stole a bucket of gold flakes from an unlocked armored truck in New York? The bucket was worth $1.6 million. It weighed 86 pounds.

Try lugging that around with you.

What if you had $1 million in the bank? You could convert that to cash, right?

Well, not so fast…

If you stuffed $1 million in $20 bills into a garbage bag, it’d weigh 110 pounds. That’s more than the bucket of gold flakes.

And good luck trying to withdraw $1 million from a bank without getting noticed. If you tried to take out just $10,000, the bank would immediately alert the Feds.

There are other options out there…

You could convert your life savings into art, stamps, vintage cars, fine wines, or precious jewels like diamonds.

But they each have high risks: They can be damaged, stolen, lost.

Some of these assets aren’t portable. And others aren’t liquefiable… meaning you couldn’t readily find buyers for them or carry them around easily. (Try hawking a rare Norman Rockwell painting without an auction house. It won’t be easy.)

How to “Teleport” Your Life Savings

If I needed to flee quickly and take my life savings with me, I’d use bitcoin.

Bitcoin is a cryptocurrency. Cryptocurrencies are nothing more than digital money.

You can store them on your computer or mobile device. Another way is to hold your cryptocurrencies offline in “cold storage.”

[Cold storage is when you put a cryptocurrency in a wallet. The safest type is a paper wallet. You can print out your private key and password and store it in a safety deposit box. Or you can put the information on a thumb drive and put that in a secure place.]

Cryptocurrencies are also stored anonymously on the blockchain. So it’s difficult for someone to hack into your online account or confiscate your money.

With bitcoin, you can move $1 million just as easily as you could move $1.

With one click of a mouse, you can send your life savings anywhere in the world… securely, anonymously, and almost instantaneously.

If it’s in cold storage, you could upload $1 million to your thumb drive. It’s like carrying $1 million in a device the size of a cigarette lighter…

So if you wanted to vanish with $1 million today, I’d recommend you do it with bitcoin.

No other asset offers the combination of portability, liquidity, security, and anonymity that it does.

Over the past 12 months, the Technology Select Sector SPDR ETF (XLK) has risen 28%. 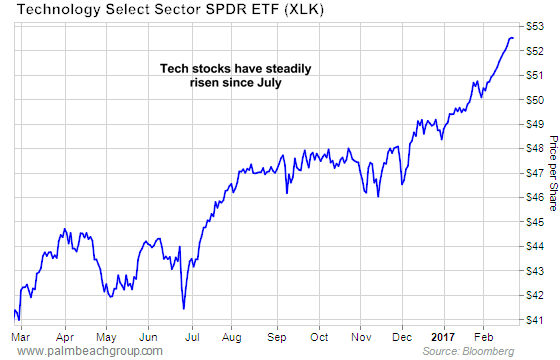 We’ve written previously that these two trends are reaching their mass adoption point (MAP). As the MAP cycle kicks into gear, technology shares go up.

As you can see in today’s Market Briefs, the blockchain continues to break ground. We’ll continue to follow both of these trends in the Daily.

Blockchain Bonanza: Last week, Northern Trust became the latest financial company to adopt the blockchain. Northern Trust revealed that it’s been discreetly running what may be the world’s first functioning private equities blockchain. The bank’s president said the most significant business advantage the blockchain offers clients is a faster time to market for a new crop of high-tech private equities funds.

This Bear Is Stocking up on Gold: Russia has been on a gold-buying spree. The Russian Central Bank added 1 million ounces of gold (about 34 tons) to its reserves in January 2017. Over the past 12 months, the bank has added 187% more gold to its reserves than the People’s Bank of China.

This should come as no surprise to regular Daily readers. PBL analyst Greg Wilson recently wrote that central banks have silently been net buyers of gold for the past seven years. If this trend continues, Greg says we could see gold prices rise to $6,700 per ounce… a staggering 436% increase from today.

Taiwan Joins the War on Cash: Taiwan wants to ban the use of cash to purchase real estate and luxury goods such as exotic cars and jewelry. Of course, the Taiwanese government cites the same bête noire as every other government: money laundering. Taiwan wants to crack down on money going into criminal and terrorist enterprises. But regular Daily readers know this is a ruse. If you haven’t already, now’s the time to buy some gold and cryptocurrencies as a defense.

From Bud J.: Hi, Nick. Thank you very much for your direct and concise writing style. If only more financial analysts would do so…

One comment on your Daily Elite 25… Using your three-step method, I would like you to perform the equivalent analysis for small-cap companies (generally under $200 million in capitalization). My gut says the returns would be even greater than large caps.

Nick’s Reply: Thanks, Bud. I appreciate the kind words. I searched for companies with a market capitalization over $200 million to help ensure liquidity. Most companies smaller than that don’t trade enough shares for us to get into. Meanwhile, I did remove that requirement and ran a backtest adding small caps. The final results were only 0.2% higher per year, which is statistically insignificant.