Today, I’m going to share a little-known stock-picking method with you…

It’s a system that would have allowed you to double the returns of the market over the past 20 years.

Wall Street doesn’t want you to know about this method because you’ll be able to pick stocks yourself without its help.

Most brokers want you to blindly put your money into their index funds. The more people they put into these funds, the more money they make (regardless of performance).

Plus, index funds are easier for them to manage. They don’t have to put in the work to find great companies for you.

But our goal at The Palm Beach Daily is to help the average Joe become a world-class investor. We’ve put in hundreds of man-hours to bring the best research to our readers.

These elite companies returned 21.6% per year over the past two decades. The S&P 500 returned only 7.4% (including dividends) during the same span.

If you put the same $1,000 in our elite class of companies, it would have grown to $50,200. That’s 12 times more money. And this difference grows bigger every year.

Fortunately, our method makes it much easier to identify these types of companies.

It only takes a few minutes to learn. And once you do, you’ll be able to pick elite companies yourself…

Your Checklist for Finding Elite Companies

There are three things we look for when trying to identify elite companies:

Today, I’ll you show you how to use Step 1 (high ROIC) to create a shortlist of elite companies you can choose from.

I’ll go over Step 2 (high growth) on Friday and conclude with Step 3 (cheap valuations) on Monday.

By the time we’re finished, you’ll know how to identify a handful of elite companies that will make you lots of money.

The first box you need to check on the list is high-ROIC.

ROIC is calculated by subtracting taxes from operating profits and then dividing the result by invested capital.

I like ROIC better than the more commonly used “net income” metric because it doesn’t include one-time charges and write-offs.

ROIC is always calculated as a percentage. Good companies have an ROIC of over 10% per year.

As you can see in the chart below, companies with an ROIC of 20% or higher have doubled the returns of the S&P 500 over the past 20 years. 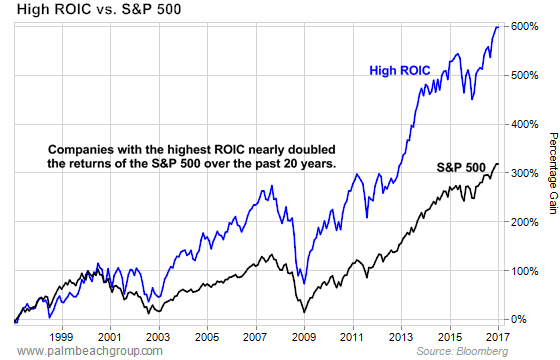 There are more than 4,200 publicly listed U.S. companies with market caps of $200 million or more.

We were able to filter those down to 281 by just looking at those with an average ROIC of over 20% over the past five years.

To narrow it down even more, we scanned the list for companies with the highest average ROIC over the past five years. That pinpointed 10 (see table below).

Remember, there are two other boxes to check on our list: high growth and cheap valuations. But this list is a good starting point to find quality companies.

Tomorrow, we’ll winnow this list down to four of the best performers over the past five years. By Monday, only one elite superstar will be left…

The dollar is strengthening…

Since the beginning of the new year, the U.S. dollar has weakened. But that looks to be changing. After bottoming in May, the U.S. Dollar Index is up 9%. 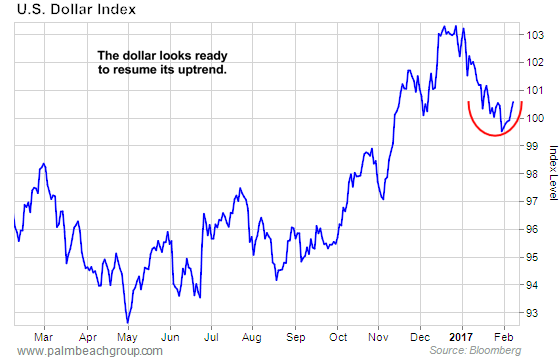 Global Inflation on the Rise: Inflation is rising across the world. The global Citi Inflation Surprise Index measures price surprises relative to market expectations. It’s at its highest in more than five years. The reading turned positive in December. That means inflation data was higher than expected… for the first time since 2012. As we’ve said in the past, commodities (especially gold) are a good hedge against rising inflation.

Germans Turning Against Euro: Rising inflation isn’t just hitting the United States. Germans are also feeling the pressure. In the past century, Germans have had two massive bouts of inflation. And now, as the euro weakens, Germans have to pay more for goods. If Germany turns against the euro, that currency is doomed.

Confessions of an Illegal Alien: “In 1996, we crossed the border on a tourist visa waiver allowing us to stay for three months. We didn’t ‘go legal’ until a decade later.

For 10 years, we lived as ‘undocumented’ residents. Illegal aliens. No green cards. No visas. No nothing. We had an apartment in Paris and a house in the country. We lived there together—husband and wife, a mother, an aunt, and six children—and not one of us had a proper visa.”

In Tuesday’s Daily, we asked, “Do you think President Trump’s travel ban is a good idea?” Many of you shared your thoughts with us…

I disagree, however, with our president’s decision to build a wall along the southern border. There are laws already in place which, if enforced, would discourage illegals from flooding into the United States. I think illegals wouldn’t come here if they couldn’t find work or receive medical attention. So, let’s enforce existing laws.

From Lorraine K.: You asked if Trump’s travel ban is a good idea… I don’t think TRUMP is a GOOD idea…

From Larine J.: I’m sticking with the president on this movement.

From Rita M.: Regarding President Trump’s TEMPORARY halt on a few immigrants: YES, we need this!

We must control our borders and enforce our laws. And we need to do away with “sanctuary” cities and states. They’re breaking the law… Not to mention I don’t want my tax dollars going to benefit illegals!

Editor’s Reply: President Trump’s immigration ban is a hot-button issue. Now it’s tied up in court. What do you think the outcome will be? Share your thoughts right here…

What’s inside this mile-wide stretch of reddish rock? Click here to find out…