Open a newspaper or turn on the TV, and you’ll see story after story of how inflation is destroying the lives of millions of Americans.

Do a Google search, and you’ll find plenty of stories about ordinary people getting crushed under the weight of higher prices.

It seems like we’re on the verge of a global recession.

Inflation is killing the middle class… 401ks are getting crushed… mortgage rates are going through the roof – so we could see a big correction in the housing market.

Even with this reporting from the mainstream media, I’m not sure most people understand how bad things are. Or how much worse they can get.

Friends, don’t hold your breath if you’re banking on the outcome of Tuesday’s midterm elections to solve your problems.

I don’t like to get political in my newsletters… I think we can agree both parties spend like there’s no tomorrow. And I don’t expect either party to become prudent caretakers of the nation’s finances overnight.

If we don’t control our government spending, it won’t matter which party controls Congress or the White House. That’s why you need to prepare now.

When people think of inflation, they likely imagine high prices at the gas pump or grocery store.

But inflation is more insidious than that. It’s like a silent wealth tax.

Just look at the chart below. It shows what happens to $100,000 if inflation remains high over the medium term… 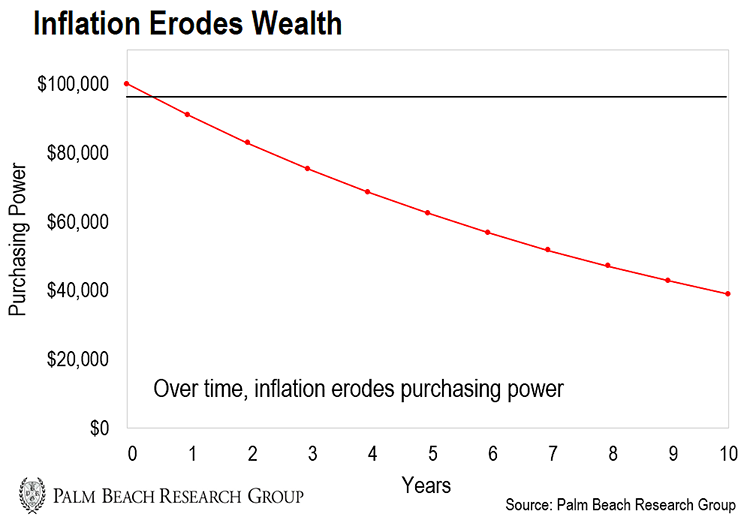 As you can see, if the inflation rate stays at around 9% annually, you lose over a third of your wealth in five years.

Let’s put that in perspective.

During the Great Inflation of the 1970s, stocks only advanced 5% over the entire 10-year period. When adjusted for inflation, investors were down 49% over the decade.

They silently grew poorer and poorer…

On the surface, it looked like their stock portfolios were the same. But in reality, they were worth much less.

So right now, inflation is outpacing the 20-year average return of stocks… and it’s only getting worse.

That means if you’re relying on the S&P 500 to bail you out… you’re making a decision that could doom you to a retirement far below the standard of living you enjoy today.

Of course, the million-dollar question is: Will inflation persist?

Based on my research, all signs point to an emphatic “yes.”

The chart below shows the M2 money supply – the measure of the total amount of highly liquid assets – as calculated by the government. These include cash, checking deposits, and money market accounts.

The measure increased by nearly $6 trillion in the last two years… and as more money gets printed and injected into the economy, inflation rises. 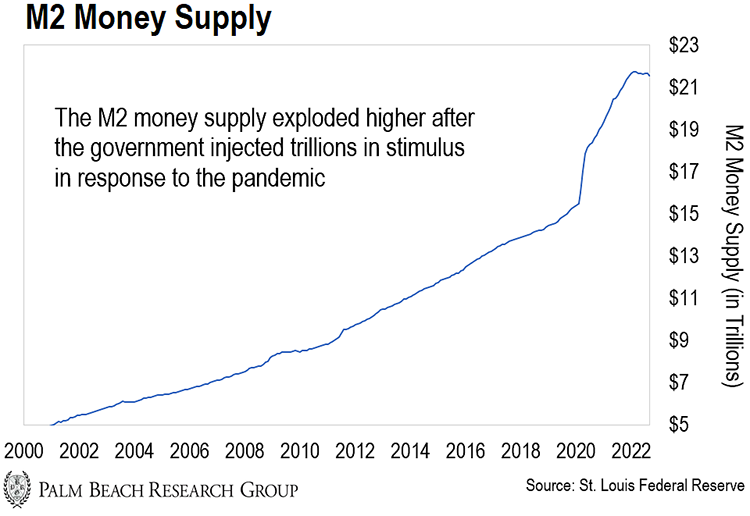 Let me be very clear: This level of monetary expansion has never happened before in the United States. And it shows no signs of stopping – regardless of which party wins Congress.

The recently signed $737 billion Inflation Reduction Act is the latest proof that the government will continue spending like a drunken sailor.

The genie is out of the bottle. Nobody can stuff it back in.

In this inflationary environment, the old playbook of working hard and buying blue chips isn’t enough to give you a comfortable and dignified retirement… and it’s only going to get worse.

In the next few months, we’ll see a market crisis that I believe will compound those inflation-induced losses… And there’s little Congress can do about it.

More Political Gridlock Is on the Horizon

This year has been one of the top 3 worst markets of my entire 30-year career.

Everyone has lost money, including myself.

And if you’re trying to sidestep the bloodbath by leaving your money in the bank… it gets destroyed by the highest inflation in the last 40 years.

So it really feels like there’s no place to hide. And the problem is that inflation is like toothpaste. Once it’s out, it’s really hard to get it back in.

But while most people understand how bad things are with inflation… my fear is they don’t know how much worse they can get.

There’s a trigger on the horizon that could spark what I call “The Next Lehman.”

In case you need a refresher, in 2008, Lehman Brothers went from being the fourth-largest U.S. investment bank… to one of the largest bankruptcy filings in U.S. history, with $639 billion in assets and $619 billion in debt.

It was a disaster of epic proportions for the market… but over the next few months, I believe we’ll see a crisis with the potential to be 155x larger than the Lehman collapse.

It’s a crisis that will take what little you can scrape from the market… and compound the pain we’re already feeling from inflation and a lagging economy.

That’s why I’m going to share all the details on this “Next Lehman” on Wednesday, November 16, at 8 p.m. ET.

It involves a little-known recession-proof asset that’s less volatile than stocks but offers massive upside… an asset that Wall Street eagerly trades while leaving you in the dark.

All you need to do to join me is click here to automatically reserve your spot.

Friends, I know it’s scary out there…

When you look at your brokerage statement and see red, you probably want to bury your head in the sand and forget about the market for a while.

I know that’s the comfortable thing to do. I feel that way sometimes as well.

But with inflation getting out of control, that’s a big mistake.

An even bigger mistake is to wait for politicians to bail you out. Regardless of which side controls Congress, we’ll likely see political gridlock for the next few years.

I doubt we’ll see any meaningful legislation pass with the White House controlled by one party and Congress controlled by the other.

You need to protect your capital right now because your financial future – and your retirement – could be at stake.

So please join me next Wednesday, November 16… I can almost promise that the crash-proof strategy I reveal will be completely new to you.

But it’s one where I’m putting my own money to work because I truly believe it’s one of the safest ways to outperform inflation in this crazy market.

P.S. As a bonus for joining me next week, I’ll also discuss my “2023 Recession-Proof Portfolio”… and I’ll even share the name of one pick for free.

Considering that the average peak gain of my past free picks is 18x, I think it’ll be worth your time… So I urge you to attend my free event and learn how to avoid the Next Lehman.