Many people are skeptical of the financial publishing industry…

It’s not hard to understand why… After all, we do occasionally make what some may consider outlandish claims.

For instance, Daily editor Teeka Tiwari believes he’s found the next big idea that can accelerate your wealth journey from years to just 24 hours (more on that in a moment).

That may seem crazy to some… but longtime readers know Teeka has a track record to back up his bold claims.

And I’m not cherry-picking, either.

Out of 74 positions in his model crypto portfolio, 48 are winners with an average return of 1,650%. That’s a 65%-win rate despite the recent pullback in the overall crypto market.

Last year, I saw a few ads for Palm Beach Confidential and hesitated to sign up. I’ve fallen for scams before and was not going to fall for another.

After watching Teeka’s recent webinar, I paid for the 2-year subscription. (Which was not a trivial amount for me.) And we were off to the races. A year-and-a-half later, I’m just blown away at the results. It’s hands down the best money I’ve spent.

Now, we love receiving emails like this from our subscribers. But the truth is, they couldn’t make life-changing gains without following our two-step formula.

It involves asset allocation and asymmetric investments. And we’ve consistently beaten the market year after year with average gains as high as 500% using this “secret sauce.”

If you’ve used our secret sauce to make life-changing gains in crypto like Hirokazu did… congratulate yourself. You’re already on your journey to financial freedom.

But if you haven’t, today I’ll pull back the curtain on our stellar track record… reveal how our “secret sauce” works… and more importantly, show you how to get access to an idea Teeka believes can accelerate your wealth journey from decades to 24 hours…

The first part of our formula is asset allocation. It’s simply a way to diversify your portfolio across different assets to maximize returns and minimize risk.

When Teeka took over our flagship Palm Beach Letter newsletter in June 2016… he overhauled our asset allocation model by including more alternative ideas.

The first was probably the most controversial: Bitcoin.

At the time, mainstream financial advisors avoided bitcoin like the plague. They didn’t understand this new asset class. And they feared what they didn’t know.

But Teeka knew bitcoin’s underlying blockchain technology would be revolutionary. And he predicted adding bitcoin to your portfolio would boost overall performance while lowering risk.

Time has proven him right…

Bitcoin has outperformed gold by 6,675% over the past five years. So earlier this year, Teeka increased our bitcoin allocation to 10%… while dropping gold’s allocation to 1%.

And he didn’t stop there. He added other alternative ideas like “Private Markets” – which includes investments like pre-IPOs and private placements – and “Collectibles.”

Today, our asset allocation model has expanded to nine unique classes. See for yourself… 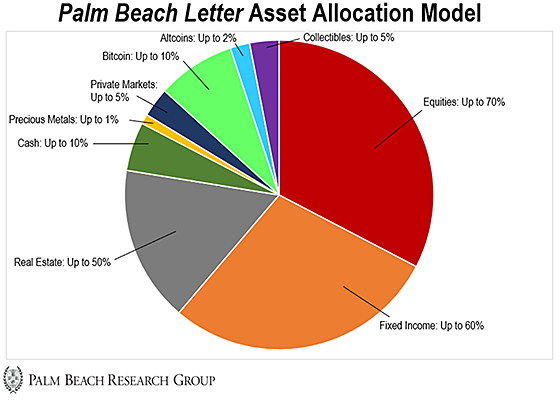 The result is a broadly diversified model with higher return potential and lower risk.

And our subscribers have been handsomely rewarded…

The PBL portfolio has done over 17x better than the market. The performance is so remarkable… we had an independent auditor verify those exact returns. 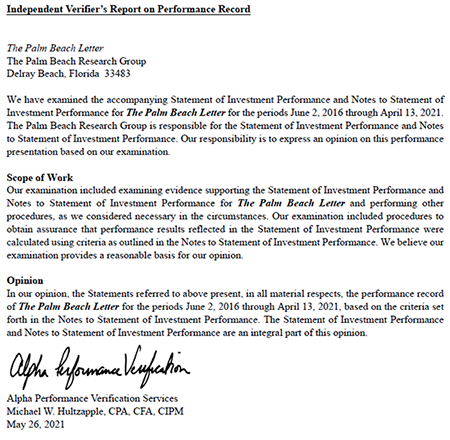 In the first part of our formula, we create a diversified portfolio of assets that can generate multiple income streams.

In the second part, we take a portion of that safe income and put it into what we call “asymmetric” risk investing.

That’s why the average investor ends up making a very unfair negative asymmetric bet. They often can’t bank more than the average annual return on the S&P 500, about 10%… if they’re lucky.

According to J.P. Morgan, retail investors made a meager 2.9% return per year over the last two decades.

When you make a negative asymmetric bet like this, you’re risking way more than what you’re potentially getting in return.

What we do is something very different. We put our subscribers in the position to harness the effects of positive asymmetric risk.

This approach allows you to turn tiny grubstakes into life-changing gains without putting your current lifestyle at risk.

That’s how Hirokazu can put a few hundred dollars in an idea like crypto… and put himself on the path to financial freedom.

And taking these outsized bets is only possible because of the first part of our formula.

Here’s why I’m telling you all this…

Your entire life, you’ve been told that if you wanted a shot at complete financial freedom… you’d have to invest for decades and decades.

But Teeka believes his newest asymmetric idea can cut that down to 24 hours.

I know this is a bold claim. But as I’ve shown you above, Teeka has a track record backing up his most audacious calls.

And during this event, he’ll reveal details about what this opportunity is… how to get involved… and why he believes it can help you create 24/7 Freedom in just 24 hours.

Plus, as a bonus for attending, he’s giving away a never-before-released pick with the potential to 10x your money.

You’ll get the name and ticker symbol during the event, no strings attached… and his past free picks have an incredible average peak gain of 1,691%.

So don’t delay. Join Teeka on Wednesday, June 9, at 8 p.m. ET and find out how you can put yourself on the path to 24/7 financial freedom in 24 hours.

P.S. This special event is free to attend, but event VIPs get a special bonus. Click here to learn more.