In yesterday’s Daily, I showed you a simple way to beat the market with the “bridesmaid” strategy.

Today, I have another strategy for you.

You’ll need a strong stomach for it…

But if you’re willing to be a contrarian, it has the potential to boost your portfolio’s returns and beat the market by nearly 3% per year – year in and year out.

Like yesterday’s bridesmaid strategy, this one also comes courtesy of The Leuthold Group.

(If you haven’t heard of The Leuthold Group, it’s one of the world’s top financial research firms. You can learn more about Leuthold here.)

Now with the bridesmaid strategy, you buy the second-best performing asset class of the previous year. That’s because based on history, the previous year’s runner-up generally outperforms in the following year.

The bridesmaid strategy can also work by sector, but today’s strict value approach – what we’ll call the “cheapest sector strategy” – can work even better. It’s just as easy – and nearly as profitable.

Now, it might be difficult for some investors to buy the cheapest sector in the market. It’s usually the most-hated one as well.

But if you’re willing to go against the crowd, the returns are usually worth it… 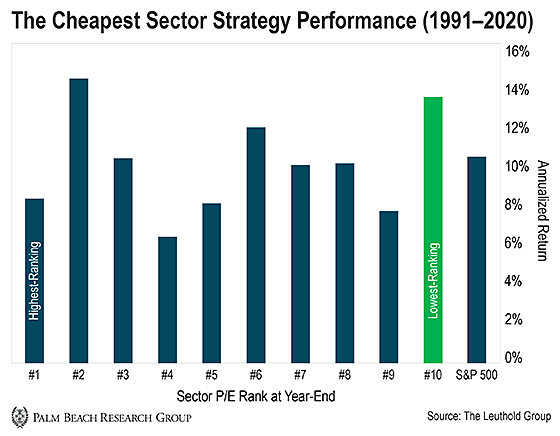 As you can see in the chart above, the two sectors that have outperformed the S&P 500 by the greatest margins are: the second-highest P/E sector and the lowest P/E sector.

So if you’d followed the cheapest sector approach, you would’ve outperformed the market by an average of 2.9% per year.

Although it’s not foolproof – like we see above where the second-highest P/E sector has barely outperformed the lowest – the strategy sports a solid win rate of 60%. This cheapest sector strategy has bested the S&P 500’s returns in 18 of the last 30 years.

Now, as Leuthold points out:

The strategy rewards only those bold enough to buy the absolute lowest P/E ratio. Sectors with the seventh-, eighth-, or ninth-ranked P/E ratios have all been long-term underperformers. Go low or go home!

From the Bottom to the Top

The table below ranks 10 of the S&P 500’s sectors from highest to lowest by their December 2020 P/E ratios. (Leuthold uses median trailing P/E ratios.) As you can see, financials ranked at the bottom…

Based on history, this means financials are likely to outperform the market this year.

So if you want exposure to financials, consider the following exchange-traded funds (ETFs)…

You can use the Financial Select Sector SPDR Fund (XLF) or the Vanguard Financials ETF (VFH) for 2021. They’re the top two ETFs based on assets in the sector. And they have super-low expense ratios of 0.13% and 0.10%, respectively.

So consider using the cheapest sector strategy when you’re rebalancing your portfolio at the beginning of each year. If history is any guide, you’ll beat the market by a couple percent more often than not.

P.S. The bridesmaid and cheapest sector strategies are a great way to boost your odds of beating the market year after year…

But if you really want to swing for the fences, Daily editor Teeka Tiwari has found a way for you to potentially achieve a lifetime of wealth in one day.

These types of life-changing gains are possible on IPO day, when venture capitalists (VCs) see windfalls beyond your wildest dreams.

The best part is, you can get in on these deals before the companies go public. It’s the difference between making 112% on IPO day like ordinary investors did with Airbnb… versus 70,488% pre-IPO gains like VCs saw with Airbnb.

That’s why on Wednesday, January 27, at 8 p.m. ET, Teeka will hold his Freedom 2021 Summit. It’s an event potentially so lucrative, it could make 2021 the year you reach financial freedom… and it’s absolutely FREE to attend.

To reserve your spot and learn more about this once-in-a-lifetime opportunity, click here.

And if you register now, you’ll be eligible for Teeka’s bonus pre-IPO master class. The master class value is $500. But you can get it for free.