But what if probability showed that a second-place finish would make him the statistical favorite to win the next race?

In fact, asset allocators would’ve been handsomely rewarded by following one simple strategy over the last 49 years.

It really couldn’t be much easier to follow… So, in today’s issue, I’ll tell you what it is, and more importantly, why you should implement it in the coming days.

It’s called the “Bridesmaid” strategy. My colleagues at The Leuthold Group developed the method.

If you haven’t heard of The Leuthold Group, it’s one of the top financial research firms for institutions in the world. (You can learn more about Leuthold here.)

Leuthold crunched the numbers by measuring the performance of seven asset classes since 1973:

You start with these seven major asset classes. And you observe each one’s returns from the prior year. Then, you buy the second-best performer (the “Bridesmaid”) and hold it over the next 12 months.

As you can see in the chart below, picking the Bridesmaid hands you the highest return over the long haul… 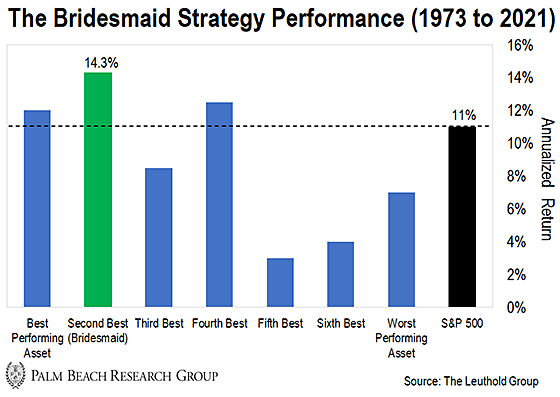 But it’s the long-term results that matter most… And it’s hard to find active fund managers who beat their benchmarks in the long term.

In fact, S&P Dow Jones Indices reports that only 14% of all domestic funds beat the U.S. stock market over the last decade.

In contrast, the Bridesmaid strategy has eclipsed the S&P 500’s returns in 31 of the last 49 years – for an impressive 63% win rate.

With this strategy in mind, let’s take a look at what history says is the best bet for 2022…

According to last year’s returns, this year’s Bridesmaid is real estate…

Since real estate was the silver medalist in 2021, it’s the top choice for 2022 based on market history. It’s that simple.

If you’d like to get some exposure to real estate, consider an exchange-traded fund (ETF).

You can use the Vanguard Real Estate ETF (VNQ). It’s the top ETF based on assets in the space. And it has an ultra-low expense ratio of 0.12%. Plus, it sports a 2.5% yield.

If you want to really benefit from this strategy, you need to act now. This is an annual rebalancing strategy, and we’re a few weeks into the year.

So, if you want to get started, take a small position today and hold it through the end of 2022. And be sure to keep this Bridesmaid strategy in mind when you’re rebalancing your portfolio at the beginning of each year.

In tomorrow’s Daily, I’ll show you a contrarian angle on the Bridesmaid strategy… another way to beat the market by an average of 3% per year.

P.S. The Bridesmaid strategy is a simple way to set yourself up for stock market gains in the year ahead…

But if you’re looking for ideas outside of traditional investments, a coming crypto catalyst could unleash extraordinary gains – bigger and faster than anything we’ve seen on Wall Street.

Daily editor Teeka Tiwari calls it the “Final Countdown,” and when it triggers it’ll send mainstream investors rushing into crypto… but once everyone is on board, the biggest profits will be off the table.

To learn more about the Final Countdown and receive the name of Teeka’s No. 1 crypto to play it, click here.