Nick’s Note: Regular readers know we’re long-term bulls when it comes to bitcoin and cryptocurrencies in general. Last year, we predicted billions in institutional money would flood into this market… and that’s coming true as major Wall Street players enter this space. When the next rally comes, institutions will drive the crypto market much higher.

But what about the short term?

That’s why we turn to longtime PBRG friend and master trader Jeff Clark, who’s an expert at technical analysis. Jeff usually analyzes stock charts for profitable, short-term trades. But today, he turns his attention to bitcoin’s price action. Is it ready for a year-end breakout? Read on below…

The holiday season was spectacular for bitcoin last year.

The oldest and largest cryptocurrency was trading for about $6,000 per coin on Halloween 2017. By the time we got to Christmas, bitcoin was above $19,000 per coin.

Of course, we all know what happened next.

It’s the same thing that always happens when an asset price goes parabolic to the upside.

Bitcoin crashed. It gave back all of the gains of the parabolic rally phase. And for the past few months, bitcoin has been stuck in a relatively tight trading range between $6,300 and $6,600 per coin.

But it looks to me like bitcoin is gearing up for another year-end rally.

Take a look at the chart below, which tracks the price of bitcoin… 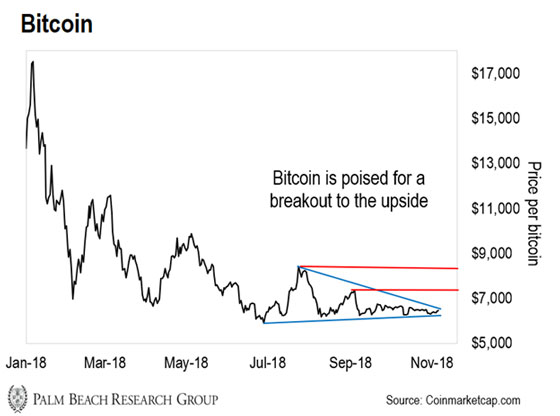 This chart is forming a tight “consolidating triangle” pattern (the blue lines). Bitcoin is rapidly approaching the apex of the triangle. So the price is set to break out of the pattern, one way or the other, within the next week or two.

All of the technical indicators are in neutral territory. So they’re not offering any clues on the potential direction of the coming breakout. But to me, this chart looks more bullish than bearish.

A breakout to the upside—above $6,600 per coin—should lead to a rally up to at least the first resistance level around $7,500. And a stronger move could target the next resistance level at about $8,100. A move towards either of those targets would be a tremendous short-term gain.

Bitcoin bulls might be a little disappointed in those price targets, though. They might be looking for a move back towards last year’s high of almost $20,000 per coin.

That’s not going to happen—at least, not anytime soon.

Parabolic tops—like the one formed by bitcoin last December—tend to mark the top of the price for several years. Think about the parabolic top in silver back in August 2011, when silver traded up to $49 per ounce.

That was seven years ago. And while silver has had many decent rallies over the past few years, it has never come even close to getting back towards that $49 level.

I could be wrong, of course. But I don’t see bitcoin trading back up to $20,000 for a very, very long time. However, I do think bitcoin could run as high as $8,000 or so over the next several weeks.

That would be a very solid gain on this beaten-down asset.

P.S. The biggest money-making opportunity we’ve seen in nine years is barreling our way. It’ll only stay open for a short period (somewhere between 20 days and five months). I call it the “V-Line Breakthrough.” During this period, my method generates 1,093% more money than the norm. You can learn more about it right here…

From Charles H.: Regarding Teeka’s assessment of bitcoin’s volatility, it seems to me that nobody talks about something that I believe has had a major impact on bitcoin—especially its volatility to the upside. And that’s the introduction of bitcoin futures.

I believe that dampening upside volatility was the main reason for allowing bitcoin to be traded on the futures exchanges. If you look at volatility to the upside before and after this event, you will find a distinct reduction following the event.

From Pearl B.: All of your information is wonderful. I’m an amateur when it comes to cryptocurrencies, and I’m learning how to buy bitcoin.

From Corey P.: Hi, Nick. Thanks again for your relevant, thought-provoking, and actionable ideas. You recently highlighted Jeff Brown’s take on the coming 5G revolution. In that discussion, Jeff accurately stated that consumer satisfaction with internet service providers (ISPs) is very low.

One of the contributing factors he cited is the monopoly enjoyed by only a few companies. I agree. But he momentarily lost me with his accurate assertion that only a few of another kind of company will eventually provide 5G services.

Isn’t that a monopoly? I hate Verizon with the strength of a thousand suns. I left them and their “smart” phones behind. Won’t we run into the same dissatisfaction with 5G service providers that we currently have with ISPs? Thanks again for the great work.

Do you have questions or comments for our editors? Send them right here…

There have been two major power shifts in American history. Each time, early investors were rewarded with vast riches.

Now, a new type of energy is taking over. It will change the lives of Americans in a profound way… and create a new set of energy millionaires. 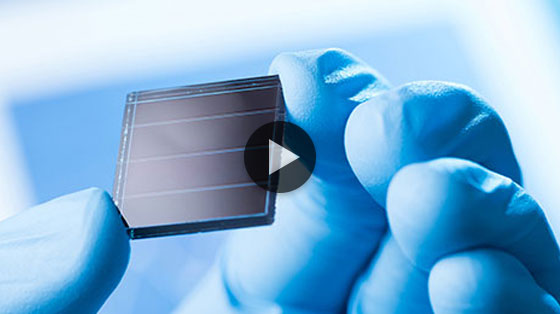