MILWAUKEE—“Rexnord of Indiana is moving to Mexico and rather viciously firing all of its 300 workers. This is happening all over our country. No more!”

President Trump hasn’t been able to back them up—at least not yet.

Rexnord is a small manufacturer of ball bearings.

The $2 billion company doesn’t even have its own headquarters… It shares a building with other businesses just outside of downtown Milwaukee.

We recently visited its corporate offices as part of our Rust Belt Tour. We want to get a firsthand look at how President Trump’s policies are affecting American businesses.

And despite his tough talk on trade protectionism, companies like Rexnord are struggling.

To cut costs, Rexnord announced it would send 300 union jobs from its Indianapolis plant to Mexico.

The move will save Rexnord an estimated $30 million per year—and could increase profits by 44%.

That’s because Rexnord is paying Mexican workers one-eighth what it would pay American workers.

At Rexnord’s Indianapolis plant, the average worker is making $25 per hour—plus benefits. According to United Steelworkers, the average Mexican worker will be paid about $3 per hour.

So it’s no wonder so many companies are opening shop south of the border.

We just started our tour… and already it looks like the forces of globalization are conspiring to derail President Trump’s “America First” agenda.

But this is a long trip… and the fight between protectionism and globalism will be a long war. That means there’s still plenty of uncertainty out there for investors.

During the presidential campaign, then-candidate Trump said he would protect U.S. jobs. He was going to do that by applying a 35% tax on imported goods.

A border tax would wipe out any cost savings companies like Rexnord expected to gain by offshoring labor to cheaper countries. It would force them to stay home.

But the Trump administration seems to have backtracked on the border tax.

His rationale: The outcome would be too unpredictable.

(We disagree. The outcome is predictable—stagflation.)

Trump’s own Treasury secretary says his border tax is dead, yet the president continues to threaten to implement protectionist measures.

For now, Rexnord’s gamble to move jobs to Mexico looks like it will pay off.

Despite his rhetoric, the Trump administration doesn’t appear willing to punish companies that offshore labor.

Nevertheless, the president continues to rail against global trade deals he thinks are bad for America.

During his first foreign trip as president last week, Trump threatened to stop German car sales to the United States.

Trump may be fighting a losing battle. But at least one thing is for certain… He’s creating a lot of uncertainty in the market.

And he still has a powerful movement behind him.

People around the world—including many Americans— want their politicians to do more to protect their jobs. This trend isn’t going away anytime soon.

Republican lawmakers say they will look for other measures to keep jobs at home. If the border tax doesn’t work, who knows what else they may come up with?

We don’t know how this will turn out… But we do know this: Political uncertainty will be bad for international businesses.

The specter of protectionism will be a drag on their returns for the next couple years.

As long as this uncertainty remains, you’ll still want to own quality U.S. companies that produce and sell most of their products domestically.

P.S. Tomorrow, I’ll be meeting with a portfolio manager of a small-cap fund that invests in small industrial companies. Just like the ones Trump is supposed to help.

We still want to hear from you. Tell us how President Trump’s policies are affecting your community right here. We may come visit.

No question about it…

Today’s chart tracks the year-to-date performance of different sectors within the S&P 500. 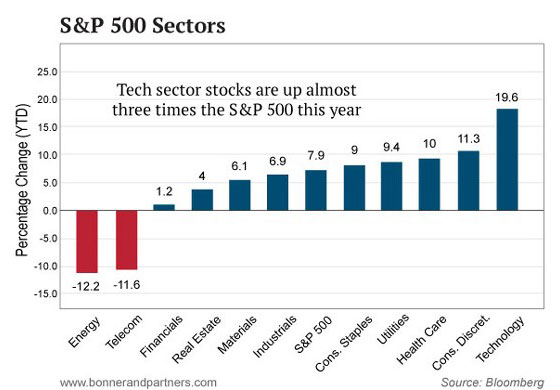 And it’s nearly three times the performance of the S&P 500 overall.