Over the past five years, I’ve helped everyday people win back decades of wealth they’ve lost from economic meltdowns like the Dot-Com Crash and Great Financial Crisis.

And they’ve all been able to catch up through my cryptocurrency recommendations.

I’m proud of what my research has been able to do for my subscribers.

I don’t know of anyone who can even get close to my track record. And it’s not the result of sheer luck, either.

If I only had a handful of winners… maybe it could be luck. But 22 tokens that could’ve made you at least 10 times your money is not luck.

Friends, I didn’t become the No. 1 crypto expert by chance. It took painstaking hard work. I had to build an entire network from scratch.

Today, I’ll tell you how I became the most trusted man in crypto… and how it has led me to the next big boom I’ve discovered in this space. It’s a boom so big I believe it can bridge the gap between the life you have today and the financial life you’ve always wanted in as little as 10 months.

How I Became the Most Trusted Man in Crypto

In 2016, I attended the Consumer Electronics Show in Las Vegas. At the time, they had just one speaker talking about bitcoin.

He explained what bitcoin was… why it was valuable… and, more importantly, why its underlying blockchain technology was so revolutionary.

When I fully grasped the power of the blockchain, the realization turned on a lightbulb in my head. I knew I had seen the future.

I immediately changed my travel plans, flew back to Florida, and told my publisher, “I’m writing about bitcoin.”

They thought I was nuts.

But I knew I had to become a cryptocurrency expert.

Back then, though, crypto was very insular. If you were an outsider, you couldn’t just walk into a meeting with developers or venture capitalists and start asking questions.

You had to meet people in their homes, where they could talk more candidly about different projects. You had to be friends with all the crypto PR agents.

So, to break into this secret society of crypto experts, I started reaching out to people.

One of the first people I reached out to was a whiz kid named Vitalik Buterin. He’s a co-creator of Ethereum. And lo and behold, he let me interview him. 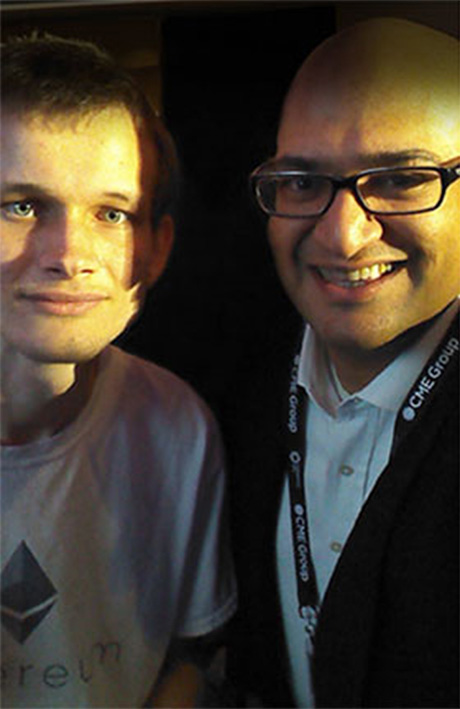 In April 2016, I became the first newsletter editor to do a full write-up on Vitalik.

After our interview, I asked Vitalik to introduce me to other people. And all of a sudden, I was meeting big-name players in the space.

I met Charlie Shrem, one of the earliest bitcoin millionaires. And Roger Ver, an early bitcoin advocate formerly known as “Bitcoin Jesus.”

They led me to some of my first big crypto plays… including Vitalik’s Ethereum project.

But I didn’t stop there. I realized you don’t find life-changing recommendations like Ethereum sitting behind a desk.

You’ve got to get out and meet the people behind the projects… the real crypto experts.

And I don’t know the exact number of red-eye flights I’ve caught or sleepless nights doing research in a hotel in some faraway country… It’s been too many to count.

I’ve met crypto influencers at a 10th-century castle in Tuscany… spoken to billionaires about crypto at the World Economic Forum in Davos… and nearly got arrested for accidentally entering Belarus without a proper visa during a research trip to Minsk.

All of this, just to bring the best crypto ideas to my readers.

And after six years of international travel, kicking in doors, and building an elite network of crypto insiders… I’ve become the most trusted man among crypto experts.

I can pretty much get anybody on the phone or get a meeting with anyone I want. And on top of that, I have a world-class team of crypto researchers and writers.

My readers have benefited from that insider access, and it’s all led to one of my biggest crypto discoveries to date…

It’s Not Too Late to Catch Up

After reading this essay, you may be thinking, “Teeka, I should have listened to you when you first recommended cryptos… Now it’s too late. The train has left the station.”

I get it. It feels like no one can get caught up anymore… Like the last bus has abandoned you at the station.

I understand. I really do. I can’t blame you for thinking that.

And I’m going to tell you unequivocally… normally you’d be right to think that. But in the last few weeks, everything has changed in crypto.

Friends, right now the stars are aligned for what I’m calling a Hyper Boom in the crypto space. And it’ll skyrocket a tiny subset of tokens I call “Catch-Up Coins.”

What does it all mean?

It means the biggest gains are just ahead of us… they’re NOT in the past. And it’s all because of an unprecedented event.

And on Wednesday, September 15, at 8 p.m. ET, I’ll explain everything behind this Catch-Up Coin Hyper Boom. And why what’s happening right now could transform your net worth and give you a rare chance to get the financial life you’ve always wanted in as little as 10 months.

If you missed out on those gains, I’ve found six more small coins I believe will give you a second chance to catch up.

So come join me on Wednesday, September 15, at 8 p.m. ET. And let me show you how these Catch-Up Coins can bridge the financial gap between the life you currently have… and the life you want in as little as 10 months.

P.S. During my special event, I’ll also give you the name of my No. 1. Catch-Up Coin to buy right now… absolutely free. No strings attached. (It’s a coin I have never publicly revealed before.)

Over the past five years, I’ve given away 10 tokens during events like this… every one of them a winner.

The peak gains go from as low as 75% to as high as 8,205%… with some of those gains happening as quickly as two months.

The only way to get the name of this crypto is to attend my free event on Wednesday, September 15, at 8 p.m. ET. Click here to reserve your spot…

You’ll also learn how to receive my complimentary special report, “How to Earn Free Bitcoin,” for registering as a VIP.