Back in 1994, the internet was in its infancy. Getting online was a cumbersome process.

I’m sure you remember opening your old Windows operating system, double-clicking on your internet service provider’s icon, dialing in…

And the terrible dial up noise.

But then… the world opened up in a whole new way.

Jeff Bezos saw a different kind of potential in that world when he started Amazon in 1994. Selling products online was a crazy idea. After all, retailers like Sears ruled the shopping world.

But the idea was simple. Use the power of this new technology to sell… books.

From Garage to Domination

Fast forward to today, and Amazon is one of the most dominant companies in the world. At a $1.7 trillion market cap, it’s the fifth-largest company in the world, behind Apple, Microsoft, Google, and Saudi Aramco, the Saudi oil company.

That’s paid off handsomely for investors. Since debuting on the Nasdaq in 1997, shares of Amazon are up an astonishing 212,400%. 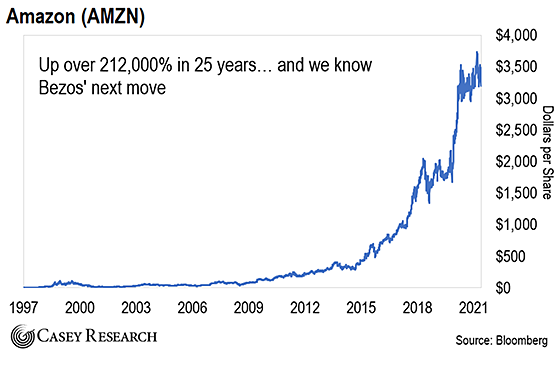 That’s the result of finding ways to use a new technology and pushing boundaries year after year.

After all, you can find almost anything on Amazon today.

What’s more… Amazon isn’t slowing down, and neither is Jeff Bezos, even though he “officially” retired in July. In fact, Bezos is doing what most people would do with their wealth: finding ways to build an even bigger fortune.

That’s why Bezos set up a secret project within Amazon before he left. Its mission? To invest in dozens of companies.

Based on our research, many of these investments have been in public companies – with stakes adding up to billions of dollars.

But it’s how Amazon is investing that matters…

We Found Bezos’ Secret to the Next Trillion

Most investors make a bet on a company’s stock in hopes that it goes higher. Over time, they want to create new wealth by betting on the potential for that company to do well.

But Jeff Bezos isn’t like the rest of us. He’s one of the world’s richest men for a reason.

But we’ve figured out how he does it… It’s a simple formula, really.

According to Amazon’s most recent quarterly filing with the SEC, the value of the investments it holds in companies is around $9.2 billion today.

That’s over 10 times the value from just three years ago. This means Amazon may be sitting on around $8 billion in investment gains so far.

Bezos wants a grand slam every time he steps up to the plate. Now, he’s guaranteeing his grand slams with a little-known investment…

Warrants are similar to having an option on a stock. A warrant is a security issued by a company to an investor. It gives the investor the right to buy stock directly from the company at a specific price – the strike price – for a specific time.

In most cases, that time period is anywhere from five to 10 years…

That’s a lot of time, but it allows investors the chance to buy a company’s stock at a significant discount to its current market price.

Here’s an example of how this works… Amazon used Canadian charter aircraft company Cargojet for years to move packages. But in 2019, the company wanted to expand its partnership.

So Amazon decided to invest in Cargojet. But Amazon didn’t ask for stock. It asked for warrants.

Cargojet agreed to issue warrants to Amazon with a $91.78 per share strike price. That means Amazon will have the right to buy shares of Cargojet for $91.78 for seven years – no matter how high the stock price goes in that time.

But for Amazon to “unlock” all the warrants, it has to spend $400 million with Cargojet over that timeframe.

It’s a win-win. In 2019, Cargojet did $367 million in sales. Amazon promised to add hundreds of millions more.

Today, shares of Cargojet trade for $202. That means Amazon’s warrants are showing about a $250 million gain so far.

But that’s not all…

Amazon did the same thing last October with grocery distributor SpartanNash (SPTN). If Amazon buys $8 billion worth of groceries from Spartan Nash over seven years, Amazon gets up to 5.4 million warrants. (Keep in mind, $8 billion is almost the same amount of revenue SpartanNash did in 2019.)

Each warrant gives Amazon the chance to buy stock for $17.73. At today’s price, Amazon already has a built-in $25 million gain on its warrants. How much higher can shares go if Amazon keeps pumping money SpartanNash’s way?

Do this over and over again and you can start to see how Amazon is playing for keeps. Bezos doesn’t just want to be the richest man in the world. He wants to have the richest company in the world… and a $4 trillion market cap.

Warrants for the Win

This may seem unfair. Amazon and Bezos are using their position and power to get sweetheart deals to make billions more.

But that overlooks the most important part of this story – the power of using warrants to make bigger gains than just buying the stock outright.

Now, although we can’t enter into direct business relationships like Amazon can, we can still use warrants to our advantage.

And in fact, we think our strategy is even better than Amazon’s. Instead of using warrants to buy stock at a discount, we’re trading warrants to profit from the rise in a stock’s price.

For instance, in February 2019, we recommended warrants of Purple Innovation (PRPL). At the time, the stock was trading for $5.75.

But the warrants were trading for just 19 cents.

By the time we exited the position last November, the stock traded for $29.95 per share, or a 421% return. That’s outstanding by any measure in 20 months.

But the warrants did better… much better.

When I recommended readers sell the warrants, they traded for $9.58. That’s an astounding 4,942% gain.

How to Ride the Next Big Warrant

Now… Jeff Bezos has another deal in the works.

And I’ve never seen a deal with the potential to make my readers as much money as this… ever. I believe those of you who get in before mid-November will be able to make 49 years’ worth of profits… in one trade.