Some called it the worst debut for a marquee name in more than a decade.

And it’s only gotten worse. Anyone who bought Uber on IPO day and continued to hold until today is down about 30%.

Uber wasn’t the only big IPO bust of 2019. Tech darling Slack Technologies is down around 25% since it debuted on the New York Stock Exchange last year.

According to Stock Analysis, so far this year, there have been 178 IPOs. That’s nearly 13% more than a year ago (there were 158 IPOs by this time last year)…

And this year’s increase comes despite a pause in IPOs earlier in the year due to the coronavirus pandemic.

Now, this shouldn’t come as a surprise to Daily readers. Back in January, editor Teeka Tiwari predicted a mega wave of IPOs in 2020. And so far, he’s been spot on.

At its current pace, we could see 2020 rival the IPO tech boom of the 1990s – a time when names like Amazon, eBay, and Nvidia went public.

As you may know, an IPO is when a private company lists its stock on a public exchange to raise money for growth and expansion.

But here’s the thing about IPOs… Private companies often go public with lots of hype… and can be money-losers for most retail investors.

All three are bleeding red… Meaning investors who bought on IPO day are down.

And expected to go public next are: Data company Palantir… software firm Snowflake… and delivery companies DoorDash and Postmates.

Now, some of you may want to invest in these marquee names as soon as they go public. But quite often, it pays to wait…

Our general rule of thumb for IPOs is that if you can’t get an early allocation (more on that below), you should wait. That’s because even if you’re not an insider, you’ll likely be able to buy the IPO at a discount a few months later.

You see, there’s a little loophole that the average Joe can take advantage of. It’s called the “lock-up period.”

When a company is private, a small number of insiders like company executives, employees, and venture capitalists can buy early shares.

But they’re bound by a lock-up period (typically around six months) when the company goes public. During that time, they can’t sell their private shares.

Since they’ve been holding their shares for usually five to 10 years… the market knows that once the lock-up period expires, insiders will sell a significant number of them the first chance they get.

When the company went public on May 18, 2012, shares shot up to $45 on the first day. Early investors sold soon after… and shares bottomed just a few months later.

But if you’d waited the full six months after the IPO, you could’ve gotten Facebook shares for around $18 – 60% below the IPO price. Today, Facebook trades around $262. 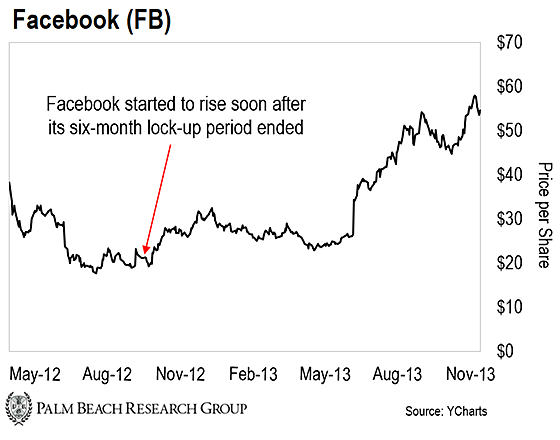 Of course, not all IPOs follow the same pattern as Facebook. But one thing holds true: If you wait, you’ll almost always have the chance to buy a stock at a cheaper price.

But if you really want to make life-changing gains from companies going public – you need to buy them while they’re still private.

How You Can Be a Pre-IPO Investor

And I’ve personally made millions of dollars from private deals… as have many of the folks in my professional network.

For instance, Main Street investors made 31% when Amazon went public. But pre-IPO investors walked away with 9,165%. We saw the same thing with Google: An 18% gain for Main Street versus a 1,500,000% gain for private investors.

Even Lemonade, Progenity… and Jamf have made fortunes for their private investors. On IPO day, they’ve returned 2,566%, 4,919%, and 9,990%, respectively, for pre-IPO investors. Retail investors haven’t made a dime yet.

In the private equity market, early investors can get into companies for pennies and sell them for tens of dollars.

Now, ordinary investors have been locked out of these moneymaking opportunities for decades. But now, thanks to a rule change by the Securities and Exchange Commission, you can get in on the action.

They’re called Regulation A+ offerings. And they’re open to the general public – not just accredited investors with a net worth of over $1 million. In some cases, you can buy into them with minimums of $500–1,000.

Finding the best deals isn’t easy. There are a lot of bad deals out there. It takes real research to separate the good from the bad.

That’s why Teeka has been working his network of insiders for the past year – looking for the best private deals for 2020. (You can learn more right here.)

IPOs are exciting, and you’ll hear plenty of stories about large, one-day gains. But don’t buy into the hype right away. You’ll likely end up overpaying for shares when a company goes public.

Wait for the lock-up period to expire. Or even better, consider private equity deals. They’re a real game-changer for retail investors.

P.S. To find the best private deals, you need to be in the know. And one billionaire connect in Teeka’s Rolodex has been part of 10 deals that have made some of the largest profits ever logged in stock market history.

Potentially as soon as September, this billionaire’s 11th deal could go public on the Nasdaq. And when it does, Teeka believes it could mark a turning point in your financial life.

And right now, you can get shares in this company before it IPOs at 75 cents per share.