Last week, I told you why the current crypto market sell-off reminds me of the Great Financial Crisis of 2008-09.

But people got too greedy. There was too much leverage in the system… And much of it involved bad assets like subprime loans.

The first shoe to drop was Bear Stearns.

Less than a year later, the company narrowly avoided bankruptcy when J.P Morgan swooped in and bought it for $2 per share on March 16. Just like that, the 85-year-old investment bank was no more.

At the time, I was running my own hedge fund. And I remember saying to myself, “This isn’t over. Bear Stearns is a massive firm. There’s no way this doesn’t have a compound effect.”

And that’s exactly what happened…

Along the way, major banks began dropping like flies…

In August 2008, Ameriquest went under. Then came Washington Mutual… Wachovia… Countrywide… and the granddaddy of all bankruptcies, Lehman Brothers. 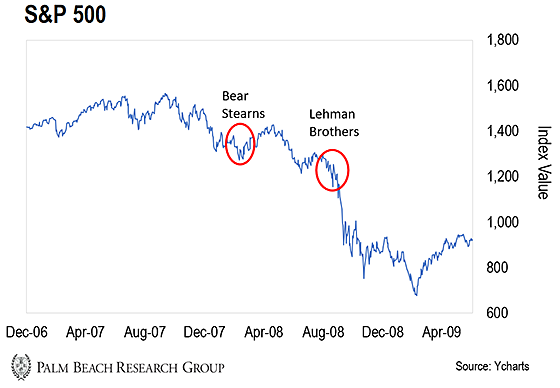 Here’s why I’m telling you this: It’s happening in crypto right now.

We’ve seen the first shoe drop in the current bear market when Terra Luna and its stable coin UST failed. That action slashed the crypto market cap by 70% since its high in November 2021.

But I expect more shoes to drop soon.

Now, I don’t know if the sell-off will be as violent as the first round… but you need to know what’s happening and how to mentally prepare yourself.

If you’ve been following the past few months, you know I’m still bullish on bitcoin and Ethereum.

The volatility we’re experiencing has nothing to do with a loss of faith or confidence in the fundamentals of these world-class assets. It’s a liquidity crisis.

As I told you last week, many investors use bitcoin (BTC) and Ethereum (ETH) as collateral for loans across the entire crypto ecosystem. In crypto, BTC and ETH are premier assets in the same way that U.S. Treasurys are the premier assets of the traditional financial system.

In traditional finance, Wall Street firms hold U.S. Treasurys and borrow against them because they’re widely considered the most secure financial assets.

In the crypto world, bitcoin and Ethereum fill the same role.

That’s important because this current crypto sell-off reminds me of the Great Financial Crisis. Back then, subprime loans unraveled during the housing crash, and firms had to sell their premier assets to cover their margin calls. They didn’t want to sell these assets, but they had to meet margin calls.

The same thing is happening in crypto, and bitcoin and Ethereum are paying the price. That’s the main reason they’re down 70% and 78%, respectively, from their all-time highs.

Like the Great Financial Crisis, we’ve seen several crypto firms go out of business so far during this bear market.

Some of the biggest names include Three Arrows, BlockFi, Celsius, and Voyager Digital.

I want you to know more crypto firms will go belly-up. And it all has to do with Centralized Finance (CeFi).

The Problem With CeFi

I won’t get into the weeds on how it works, but it allows users to trade billions of dollars in assets without human intervention. Many of these DeFi protocols have continued to work flawlessly.

The problem is not with the protocols…

The problem is the amount of speculative, leveraged bets CeFi firms like BlockFi, Celsius, and others piled onto these protocols.

The DeFi space works by taking in collateral and issuing loans against that collateral for borrowers. CeFi firms like Celsius took deposits from the public and then used that money to generate yields from DeFi projects.

The problem was that the CeFi firms got greedy and used leverage to magnify their returns. This approach worked until it didn’t. The first domino to fall was when TerraLuna and its stable coin UST collapsed.

Many CeFi firms had huge positions in UST and Luna. They had used those positions as collateral to support billions of dollars in other loans. When the prices of Luna and UST collapsed, it triggered massive margin calls.

This then put pressure on other assets that had nothing to do with Luna and UST. That selling pressure then triggered more margin loans. This then set off even more margin calls, and the daisy chain of defaults was set in motion, leading us to where we are today.

DeFi Will Be Fine, CeFi Not So Much

Decentralized Finance protocols like Uniswap and Aave are open and transparent. You can see exactly what’s happening under the hood anytime.

Centralized platforms like BlockFi and Celsius use DeFi protocols to generate yields, but private companies own them. They’re opaque. We have no way of knowing how much leverage they are using.

When it comes to private firms, you don’t know how often they may have lent out the same asset.

Lending out the same asset more than once is called “rehypothecation,” and without rigorous risk management controls, rehypothecating assets can take a firm down in a day.

This is the exact issue so many Wall Street firms faced in 2008.

Like in 2008, CeFi firms and crypto hedge funds have found themselves holding highly leveraged positions collapsing in price. This forces them to sell their BTC and ETH to cover their margin calls.

This cascading effect is not over. There is almost certainly more pain before we can say this is over.

Here’s What I Want You To Remember

I see a future when every asset will be tokenized. And DeFi will allow you to buy, sell, lend, and borrow those assets with the click of a mouse.

Right now, I want you to know these decentralized protocols function as intended.

While they have seen their token prices pull back with the overall market, DeFi platforms like Uniswap and Aave haven’t collapsed. They’re still facilitating trading 24/7.

So it’s important to distinguish between truly decentralized platforms (like Uniswap and Aave) and centralized parties using DeFi protocols (like Celsius and BlockFi).

DeFi will survive and thrive.

CeFi will likely see massive regulation that may strangle its growth – just like we saw when new banking regulations enacted after the Great Financial Crisis put a damper on bank stock performance for years.

The market has learned an important lesson from this liquidity crisis: You can’t trust centralized lenders who don’t open their books.

Until they open their books, we must rely on decentralized, completely transparent protocols if we want to conduct borrowing and lending in this space.

They may be less convenient to use than centralized protocols… but because they’re transparent, their risk profiles are much lower.

Finally, I know you’re wondering when the market will rebound.

I don’t have a crystal ball, so I can’t answer that question with certainty.

We’ve got to wring out all the leverage and bad borrowers from the system. That’s the process we’re in now.

The good news is this sell-off has happened very quickly.

So I don’t expect this bear market to last as long as the 2018 Crypto Winter.

Since this is a liquidity-driven crisis and not a crisis of confidence in the underlying assets, we’ll see a massive snap-back rally once we get through the final liquidation stage.

Is Crypto Too Volatile to Be Investable?

Financial panics and bear markets are part of the investing landscape. It doesn’t matter what asset you invest in… Sooner or later, panic will take hold and crush prices. You can’t avoid them.

The way to deal with them is to own great assets and use sensible position sizing. Since first bringing you crypto research in April 2016, I have always stressed the importance of using small, uniform position sizes.

This gives you the staying power to make it through the bear market without worrying if you’ll be able to pay your bills. I’ve said it repeatedly, and I will say it again: It never makes sense to bet the lifestyle you have for the hope of a better one.

Small, uniform positions spread across a portfolio of great assets will make you rich over time. It’s not as glamorous as betting it all on one idea and becoming an overnight deca-millionaire, but it’s a much safer and surer path to achieving life-changing wealth.