An IPO – or initial public offering – is when a private company lists its stock on a public exchange.

And IPOs are booming this year. The U.S. IPO market is on pace to surpass last year by deal count and proceeds.

If you’ve been following us in these pages, you know Daily editor Teeka Tiwari has been pounding the table on the lucrative opportunity in IPOs since January.

And his predictions have been proven right…

Now, a 50%-plus return can pay for a nice present or a vacation. But there’s a way to get even more bang for your buck from this megawave of IPOs coming to market… I’m talking 20x, 30x, even 50x your money.

Most investors don’t have access to these ideas… in fact, they aren’t even aware of them.

Today, I’ll tell you why this IPO boom is even bigger than you might realize. And how this explosive trend can have you set for life…

IPOs are one way for a company to go public. But “SPACs” are a lesser-known alternative.

According to my colleague, Julian Klymochko – CEO and CIO of Accelerate Financial Technologies – SPACs are a viable new asset class.

Julian runs the only ETF in North America with sizable SPAC exposure: the Accelerate Arbitrage Fund (ARB), listed on the Toronto Stock Exchange. So he knows a thing or two about public listings:

SPACs raised about $20 billion in capital in July and August. The asset class now exceeds $63 billion in market capitalization… up from less than $25 billion in April. Blank checks now account for a large portion of initial public offerings.

Traditional IPOs are typically used by mature companies whose investors are looking for an exit. But SPACs target companies in the earlier stages of their growth cycle. They’re looking for growth capital to invest into their businesses… as opposed to cashing out exiting investors. They give retail investors exposure to early-stage growth companies.

Now, SPACs used to be considered the black sheep of the IPO market. According to Renaissance Capital, 89 of 223 SPAC IPOs have taken a company public from 2013 to July 2020. But they’ve delivered an average loss of 18.8%.

However, this year, SPACs are going gangbusters… 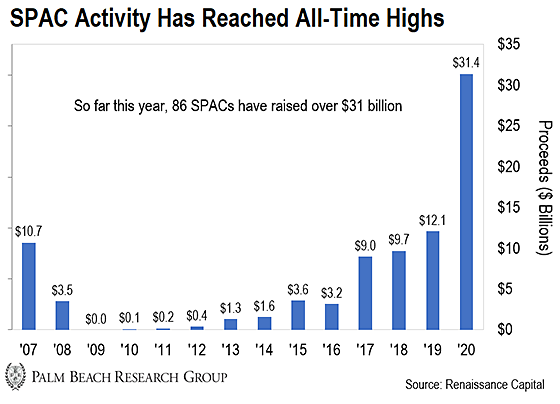 As you can see in the table above, we’ve seen 86 SPACs – and over $31 billion raised – so far this year. And we still have more than three months to go!

And some of the returns have been off the charts. Check out a couple of the best-performing SPACs in 2020:

But while those gains are nothing to sneer at, they’re just a fraction of the potential in the pre-IPO market…

The Secret to Profiting From SPACs

As I mentioned above, we’re seeing record numbers of private companies go public this year via IPOs and SPACs. And in some cases, they’re delivering investors double- and triple-digit gains.

But if you want to really make life-changing gains – the kind that can have you set for life – you need to buy great private companies before they become public.

If I gave you access to every IPO this year at their IPO prices, you would’ve made 36%. There’s no way you can get set for life with that. But if I had given you access to every pre-IPO deal before they went public, you’d be up an average 22,946% on the first day they traded publicly.

Pre-IPO investors can make those types of returns because they buy their private shares for pennies. Then on IPO day, they can dump them on the public markets for 10, 100, even 1,000 times the price they paid. Imagine making 22,946% in one day. That’s the “set-for-life” power of getting into a great pre-IPO deal.

Put another way, what if you could buy into a company before a SPAC acquires it?

The venture capitalists running SPACs are pouring in billions of dollars to acquire private companies. And if you own shares in a company they buy, you could rake in a fortune.

Now, if you want to play this trend, consider a small stake in ARB. It will give you broad exposure to SPACs.

ARB trades on Canadian exchanges. So if you don’t have access to the Canadian markets, keep your eye out for the Defiance NextGen SPAC IPO ETF (SPAK). It’s registered with the Securities and Exchange Commission and could launch shortly.

To be clear, SPACs come with some risk. So using a fund – or investing in multiple, individual SPACs – will increase diversification and lower your risk.

But if you want the potential to make set-for-life gains, Teeka has discovered a way to cash in on the IPO/SPAC craze…

It’s a pre-IPO deal in the hottest sector in America: biotech.

Most importantly of all, it has already received a special drug designation that could make it much more profitable than the typical biotech IPO – historically as much as 24x more profitable.

Of the 10 best-selling drugs of this century, nine of them received this special designation. And Teeka believes this could be the next one. In fact, he thinks it has the potential to make up to 50x returns.

P.S. Teeka’s pre-IPO deal is more urgent than you may think.

You see, pre-IPO deals have strict limits on how much capital they can raise. And the space on this deal is filling up quickly.

He can’t promise it’ll be open past today. So click here now to learn more…