It amazes me how many times I hear that. Despite the strong economy, many investors still distrust the valuation of U.S. stocks.

And it’s not just people at cocktail parties, either. Some of the biggest names in the markets also love to hate.

Take billionaire “Bond King” Bill Gross, for example. He predicted stocks were “dead” in a November 26, 2012 issue of Time.

I sure hope Gross didn’t short stocks. He blew that call big time. Yet it hasn’t stopped him from forecasting the death of equities again.

Last month, the retired money manager predicted the U.S. stock market will be “flat to down 10%” in 2020.

Now, I’m not picking on Gross.

He earned the Bond King nickname because of his awesome performance. His PIMCO Total Return Fund earned almost 8% annually over the 27 years he managed it.

By the time he left in 2014, the fund had $293 billion under management – making it the world’s largest bond fund at the time.

But he was wrong about the stock market then. And he’s wrong again now.

He’s not alone, though…

So today, I’ll share three reasons why you should ignore their advice and stay in stocks…

I don’t make crystal ball predictions. I look at data and let that guide me. And the data is indisputable. Over the last century, the market has continued to climb higher… 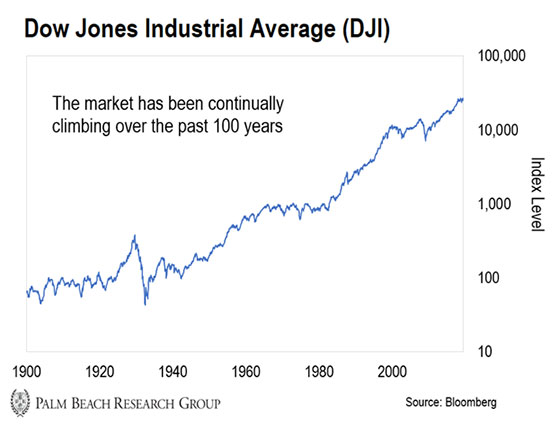 In fact, stocks have outperformed U.S. Treasuries, gold, and nearly every other asset class over the last 100 years.

Until I see otherwise – which likely won’t happen in my lifetime – history proves the highest likelihood of making money over time is in the stock market.

Of course, past performance doesn’t necessarily guarantee future results. So I need to see more.

That brings me to…

When rates are low, you earn nothing on bonds or in your savings accounts. So you have to look elsewhere for income.

And the hunt for income is really on right now because rates will likely remain historically low in 2020. Here’s why that’s important…

And that doesn’t even account for taxes, which makes holding stocks even more attractive than bonds.

So if you’re a wealthy investor looking for income, the table below shows you’d end up with more money in your pocket with stocks at current yields…

When it comes to paying taxes on your investments, stocks are clearly the better place to be.

Reason No. 3: The Market Is Still Strong

Finally, the market is much more robust than the headlines suggest.

According to FactSet, for the third quarter:

These are all bullish signs for the market going forward. And if we look at broader metrics of the U.S. economy, they’re chugging along, too.

For instance, unemployment is sitting at 50-year lows (3.5%) – the lowest level in my lifetime. And wages are up 3.1% compared to last year.

It’s hard to find a reason to be bearish with numbers like these.

Over the last 30 years, the S&P 500 is up 1,582% (with dividends reinvested). That works out to nearly 10% per year – more than enough to cover the ravages of inflation and grow your principal.

Now, nothing goes up in a straight line. So expect some volatility to start the year. Plus, the market is heading into overbought territory.

But if history is any guide, the market will continue to climb higher in the years ahead.

I call these stocks outliers. The companies are unique in their businesses, grow sales and earnings at high rates, and have big profit margins.

So if you’re serious about making real money much faster, they’re the stocks you want to buy. You can learn more about how to spot them right here.

And if you can’t do the legwork and research it takes to find these outliers… consider buying an index fund like the SPDR S&P 500 ETF Trust (SPY) – and don’t touch it for the next 30 years.

P.S. Buying an index fund is a good strategy to match market returns. But to beat the market, you simply have to buy the right stocks – the outliers.

You see, big investors drive the markets with their massive, multimillion-dollar trades that lift stock prices higher. So if you want outsized gains, you’ll need to target the outliers this big money is piling into.

Now, I spent hundreds of thousands of dollars and years of my life to develop a system that pinpoints these outliers – so you don’t have to. And you can find out how to access it right here.