Today’s essay is the second part of last Monday’s popular—and controversial—essay on the biggest threat to the United States. (You can read Part I right here.) In today’s essay, Teeka reveals what that threat is…

Civilizations die from suicide, not by murder.

I’ve always known the only country powerful enough to take down America is America itself. Look at any of the great empires of old. Their decay and eventual falls started from within.

All the major superpowers… from the Greeks to the Romans to the British Empire… came to a close because of internal strife.

The same will be true for the United States…

The fracturing of America has started with 12 “renegade” states. They are breaking away to form their own economic “country.”

Led by California, 12 of the richest states in the union are quietly changing their state laws to dismantle the need for Federal Reserve-issued U.S. dollars.

In today’s essay, I’ll tell you how state-issued money will cause the demise of the dollar… and three steps you can take to survive—and thrive in—this crisis…

Twelve states are pushing through laws designed to undermine the federal government’s monopoly on issuing money.

These legislative shenanigans are being created to completely bypass a 156-year-old Lincoln-era law that governs the issuance of money.

Once these laws begin to pass in state legislatures, we could see as much as a third of America’s economic output fracture off into New State Money. This is a new form of money that will be issued directly by the states.

The collective economic output of these 12 states is $7 trillion.

Do you notice something about the list of states above?

The three largest states by GDP are anti-Trump (California, New York, and Illinois). And all three of these liberal states are home to so-called sanctuary cities—indicating that they limit their cooperation with the federal government to enforce immigration policies.

Some have gone so far as to undercut President Trump’s policies.

When President Trump backed out of the Paris climate deal, California Governor Jerry Brown started negotiating with other countries directly. And in March 2018, Brown accused the Trump administration of “basically going to war against the state of California.”

And New York Governor Andrew Cuomo said he would sue federal immigration authorities over the Trump administration’s policies. In April 2018, Cuomo sent a cease-and-desist letter to Immigration and Customs Enforcement (ICE). “We believe ICE is violating the law,” Cuomo said. “We’re going to put them on notice today, if they continue, the state will sue them. Period.”

This demonstrates a clear divide between these states and the U.S. government. And that’s why we believe some of these state governments will try to issue their own state-backed currencies.

State-issued money isn’t new. Before President Lincoln banned the practice in 1863, the states had issued more than 8,000 different types of money.

It all came to an end on February 25, 1863, when Lincoln signed the National Bank Act (originally known as the National Currency Act). For the first time in U.S. history, it established the U.S. dollar as the sole currency of the United States.

Using a Loophole to “Print” Money

The states are using a loophole to escape the government’s currency issuance laws. They will issue a digital form of money backed by municipal bonds, which themselves are backed by taxes or project revenues. This loophole was created so states could issue bonds to raise money for state projects, like highways and schools.

What the states are doing now is enlarging this loophole so they can start issuing their own digital money backed by these projects. State residents will also be able to pay their state taxes in these new digital currencies.

Over time, the need for dollars will diminish as states start dealing with each other in their own—stronger—money.

When enough of these revenue-backed “digital coins” have been issued, how long will it be before we see them amalgamated into single entities, such as Cali-Coin (California), Casino Coin (Nevada), or Weed Coin (Colorado)?

Berkeley, California, has been lobbying the federal government for funds to improve blighted neighborhoods.

But guess what? The liberal town of Berkeley isn’t high on President Trump’s priority list.

So what did Berkeley officials do? They’ve rolled out a plan to issue a version of state-issued money to finance their initiatives. The city is using blockchain technology to issue “coins” that act like money. The money raised will pay for things such as affordable housing, homeless shelters, ambulances, street trees, and even a community theater.

You conceive of an idea, get the costs ready, push it out to the community, they can buy it right away. It’s more flexible. It doesn’t have to be a $100 million bond for a sewer. It could be smaller projects and with the lower denomination ability… It’s projected to be 50 percent less expensive to the issuer [than conventional municipal bonds].

Using new cryptocurrency technology, states can issue money that can’t be counterfeited, is secure against dilution, and is mathematically matched to incoming revenue via smart contracts. This will make state-issued money a more secure and stable store of liquid value than the U.S. dollar.

[A smart contract is a computer program. You write the terms of the deal into computer code. And the smart contract automatically executes the agreement when the terms are met. You don’t need a third party, like a lawyer or agent.]

Remember, until Lincoln outlawed it in 1863, states regularly issued their own money. At one point, there were 8,000 state-issued currencies. The problem back then was they were easy to counterfeit.

With the emergence of cryptocurrency technology, it’s impossible to counterfeit this new money.

This Can’t Possibly Happen… Can It?

When I first uncovered this research, I wanted to dismiss it. No one would believe this could happen. However, the more I dug, the more I realized I couldn’t stay silent any longer.

In just the last year or so, the value of the dollar has dropped by as much as 15%. And that’s without the threat of new, state-issued money. Take a look at the chart below, and you’ll see the dollar is in a long decline. 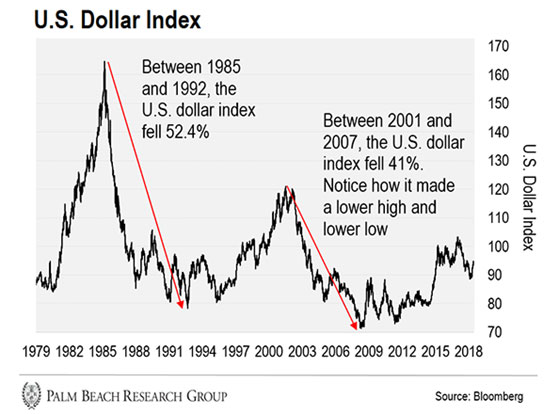 You’ll notice that sometimes the dollar will have a small rally like it’s doing right now. But when you look at the big picture, you can see all these rallies have been making lower lows since 1982.

What’s even scarier is how fast the value of the dollar can drop. One day everything is fine, and the next day, the value of your savings can plummet. In 1985, the value of one dollar dropped a whopping 32%… in just a year.

There are few people who could.

That’s why I have taken the risk of bringing this controversial research to your attention.

The death of the dollar is coming, and you can either close your eyes to the writing on the wall… or you can take back control over your money and thrive from the chaos to come.

Notice I didn’t say “survive”—I said “thrive.” Every crisis leaves one set of folks richer… and another set poorer.

If you follow the three steps below, I believe you’ll be in the best position to reap huge financial rewards from the coming upheaval.

Here’s What to Do Next

Step 1: We recommend getting exposure to companies that will benefit from a weaker dollar. Large multinationals that gain most of their revenue and profit from overseas will see their shares rise in value as the dollar declines. This is because as the dollar weakens, they can “buy” more dollars when they repatriate their foreign earnings.

Step 2: The second way you can profit from the states starting to issue their own money is by buying into the platforms they’ll use to build their own money. You see, the states don’t possess the technical know-how or the infrastructure to build their own blockchain financial networks. For their new money to be trusted and widely traded, they’ll have to use public blockchain networks. The two biggest beneficiaries will be Ethereum and bitcoin.

Step 3: One of the ill effects of a collapsing currency is a sudden and dramatic rise in interest rates. You see, as a currency crisis worsens, central banks start to suddenly hike rates to attract foreign capital. Even before we uncovered the idea of state-issued money, we have been warning about higher rates ahead. We see the emergence of state-issued money as an accelerant to an already flammable interest-rate environment. Certain securities, such as long-term bonds, will get pummeled lower as rates go higher. We recommend you avoid them.

Friends, the future is bright if you take the right steps now. Don’t be a victim. Save this essay and read it again… and make sure you’re prepared to survive and thrive from the turmoil ahead.

Nick’s Note: What steps are you taking to protect yourself from potential political upheaval in the United States? Let us know right here…

A “video game” upgrade is on the way—a mix of real-life action and on-screen play. 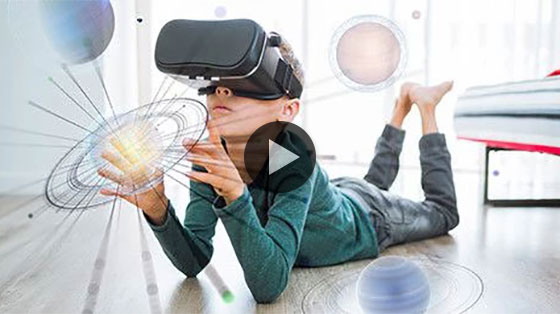