It may sound tone-deaf…

But the best time to be bullish is when things look bleakest.

At home, inflation is 7.5%. Almost a 40-year high. The Federal Reserve is considering rate hikes. And there’s no end in sight for America’s political gridlock.

Abroad, Russia is threatening Ukraine… China and U.S. tensions are on the rise… And pandemic restrictions are disrupting global supply chains.

Over the last week or so, we’ve seen the CBOE Volatility Index (VIX) – the market’s so-called fear gauge – jump from 21 to as high as 32.

(A reading over 20 signals fear and uncertainty. And a reading below 20 tells us the market is calm and complacent.)

Despite all the fear and uncertainty, I’m not worried. I believe this bull market is far from over.

I know it sounds crazy… “While the headlines are fearful and inflation is at a record high, Tiwari says there’s nothing to worry about.”

Remember, I have a track record of making bold market predictions – and being proven right.

Back in 2014 – when the current bull market was just five years old – I told a group of investors that a rare event would kick off a massive run for the ages.

Everyone pointed to the CAPE index and said the market was overvalued.

(The CAPE index is a tool used to assess future stock returns over 10 to 20-year periods. A high CAPE reading implies lower than average long-term returns.)

I explained that CAPE was a lousy timing tool and could stay elevated for years. No one believed me.

Eight years later, the market has rallied 169%, and the CAPE is still considered “expensive” with a current 36 reading.

In March 2020, when the market crashed 30% during the pandemic outbreak, I told my readers not to sell a single share… I went on record and predicted the bull market would run another 10 years.

Since then, the market is up 103% – even after the recent pullback.

To understand why I’m not worried, let me show you the difference between secular and cyclical markets.

The Market Runs in Cycles

There are two types of market cycles: Secular and cyclical.

Within these secular markets, we also have shorter “cyclical” markets. They can last from a few months to a few years. 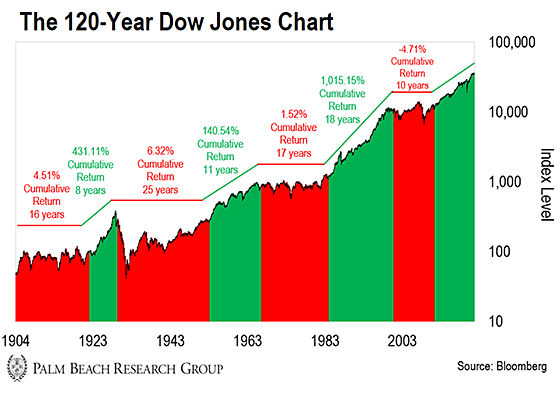 The red areas are secular bear markets – when stocks trade sideways or down for extended periods.

So what does that mean?

In the chart above, there are numerous peaks and valleys in the long-term trends.

For instance, we saw a huge secular bull run from 1982–2000. But it was interrupted by the 1987 crash when the market dropped as much as 36%. That caused a cyclical bear market.

And yet, the market still powered 1,105% higher over those two decades.

We saw a similar bear market during the March 2020 pandemic outbreak – when the market crashed as much as 36%.

Even with the pandemic crash and today’s volatility… the market is still up 149% since my 2014 speech. 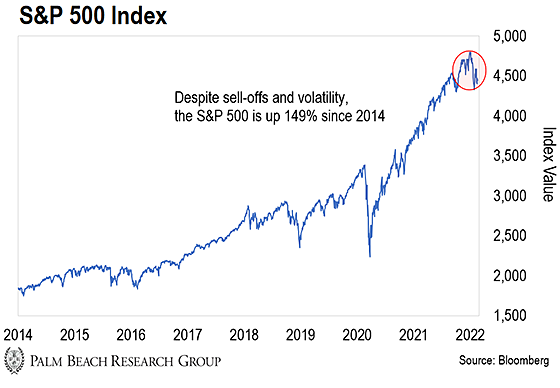 Despite recent volatility (circled on chart), I believe the market is priming for an epic long-term bull run.

And it involves a rare phenomenon I call an “Anomaly Window.”

Anomaly Windows open when an event or catalyst massively increases activity in the market for a certain period.

During these periods, boring blue-chip stocks can make decades’ worth of gains in just a few days or weeks.

For instance, my subscribers saw 184%, 380%, and 422% gains from three companies in past Anomaly Windows. These aren’t back-tests. They’re actual subscriber gains.

Anomaly Windows are usually behind the type of volatility we’re seeing today. But most investors mistake these short-term pullbacks for long-term trends.

Instead, they get bearish and sell for huge losses.

I’ve been in the financial world for over 30 years. I saw the 1989 Junk Bond Crash. I had to build my brokerage business in 1991, right before Saddam Hussein invaded Kuwait. I worked all through the Savings and Loan Crisis.

During each of those Anomaly Windows, you could have made a fortune buying into the chaos.

In fact, every single time we’ve encountered an Anomaly Window, my readers have been able to capture a decade’s worth of average S&P 500 gains… At a minimum.

Right now, we are on the cusp of one of the biggest Anomaly Windows in my 33-year financial career.

That’s why on Wednesday, February 23 at 8 p.m. EST, I’ll show you how this Anomaly Window will unfold… Plus, how you can use it to reclaim 20 years of S&P 500 gains in as little as three months.

Look, I know the headlines look bleak. Fear and uncertainty drive the news, whether it’s the Wall Street Journal or the New York Times.

But you don’t have to follow the herd and sell into chaos. The market is down because people are afraid… not because of logic. Not because it must be down.

Time and time again, these volatile periods have produced life-changing returns if you knew where to look.

So, join me next Wednesday at 8 p.m. ET to learn what you can do to take advantage.

Until then, ignore the headlines and do not sell into chaos.

Click here to reserve your spot, and I’ll see you on Wednesday.

P.S. As a special bonus for joining me February 23, I’ll share the exact stocks you can use to potentially reclaim decades of market gains in just three months.

This free event will be live. I’ll even take the time to answer some of your questions. So, click here to join me.