Believe it or not, this arrest led to the biggest bitcoin breakthrough no one is talking about today.

You see, on April 1, a new payments law went into effect in Japan. And what’s significant about the law is that it recognizes bitcoin as a legal method of payment.

Let me repeat: Japan now recognizes bitcoin as a legal method of payment.

This is huge news. And it’s getting almost no play in the media.

And as always, it’s our mission at The Palm Beach Daily to bring you the stories you won’t see on the front page… and, more importantly, show you how to profit from them.

Mark Karpelès was the CEO of Mt. Gox, what was once a major bitcoin exchange.

He got into the business in 2011 and built it up to become the largest bitcoin exchange in the world. At its height in 2013, it was processing 70% of all bitcoin transactions.

And that’s when the troubles began.

You see, Mt. Gox had issues with regulators that affected its partnerships and its customers as well. Mt. Gox ended up suspending or freezing many customer accounts.

Mt. Gox halted withdrawals on several occasions. But it also repeatedly said that it would resume normal operations in short time.

That never happened. And on February 28, 2014, the company filed for bankruptcy and closed its website.

While many are familiar with the Mt. Gox story, what most people don’t realize is that Mt. Gox was based in Tokyo.

And ever since then, the Japanese have associated bitcoin with Mt. Gox.

That’s why it’s so surprising that Japan has become the first country to recognize bitcoin as a legal method of payment.

Ironically, it was the Mt. Gox debacle of 2014 that led to the new Japanese payment law today.

The event triggered an intense debate between financial authorities and the cryptocurrency industry. And Japan’s Financial System Council got to work drafting new legislation. By December 2015, it was ready for review.

The National Diet (the lower and the upper houses of Japan’s legislature) approved the bill in late May 2016.

This is a big event for Japan. And an even bigger event for the world at large.

First, it’s going to cause a bitcoin explosion in Japan.

Right now, roughly 5,000 merchants accept bitcoin in Japan. Because of this new law, that number is about to explode.

You see, AirREGI, the point-of-sale application for the Japanese retail conglomerate Recruit Holdings, will soon add bitcoin payments. AirREGI is used by over 260,000 retail locations.

What’s more is that AirREGI is compatible with Chinese e-commerce giant Alibaba’s Alipay. So the millions of Chinese tourists who go to Japan every year will be able to use bitcoin.

Bic Camera has added bitcoin payments as well. It’s a huge electronics retailer, like the Best Buy of Japan. And folks are already making purchases with bitcoin. You can check out a customer paying with bitcoin at Bic Camera here.

Japan’s largest internet service provider, the GMO Internet Group, is getting in on the game, too. It’s already an investor in Japan’s largest bitcoin exchange, bitFlyer. And now it plans on developing a wallet service to bring bitcoin to all of Japan.

And let’s not forget that Japan will be hosting the 2020 Summer Olympics. It’s the type of event that could put bitcoin in the international spotlight.

In other words, Japan’s new law is huge. It legitimizes bitcoin in an international way.

Japan is a developed, technologically advanced country. It’s the third-largest economy in the world. And the Japanese yen is the second most liquid market globally.

Why is this important?

I believe this is the start of a trend that will see bitcoin legitimized around the world.

Japan is setting a precedent for the whole world to see. And I expect other countries to follow suit.

So what should you do to profit from this trend?

You absolutely need to get into bitcoin. Otherwise, you risk being left behind.

Think of it this way. If the financial world is the Empire State Building, bitcoin is just a pebble on the sidewalk. But that’s not going to last.

We recommend you use the Abra exchange to buy bitcoin. You can watch my free instructional video to learn how to set up your own account.

And it all comes together in a live webinar with Casey Research founder and longtime PBRG friend Doug Casey on April 20.

The best-performing payment company over the last decade is Mastercard (MA). 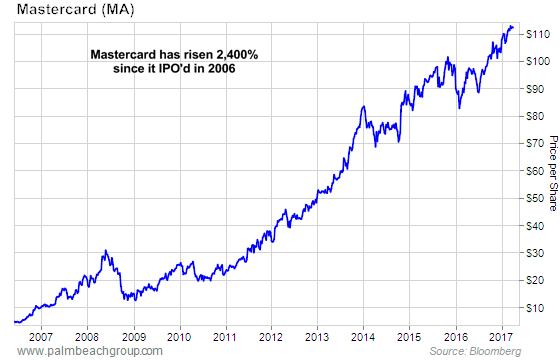 Very few companies can show these kinds of gains over an 11-year period. But that shows the profitability of payment processing.

Bitcoin is looking to take the reins of the payment processing industry… And if Bitcoin’s run is anything like Mastercard’s, investors will see massive gains ahead.

Editor’s Note: Our PBD Elite 25 portfolio continues to be a hit with our readers, and neither the portfolio nor the positive feedback it’s getting is showing any sign of stopping…

From Mark S.: The Elite 25 seems like an excellent tool for people new to or establishing an investment portfolio. Indeed it is similar to the Legacy Portfolio in that it provides distinct and specific guidelines for building wealth. I’m adding it to my investing plan and I look forward to following it for years to come! Thanks for your good work.

From Edward S.: I love PBD Elite 25. I would love to invest in these companies in my IRA and see the 20%-plus growth over time, but am concerned that you might stop publishing updates…

Any thoughts or reassurances?

Nick’s Response: We’ll be publishing monthly updates to the PBD Elite 25 for as long as readers show interest in it. And judging by the response so far, you’ll be seeing these updates for the foreseeable future.

They say a new government-backed “FEDCoin” could soon be revealed to the public, and that it would destroy the U.S. dollar.

To learn more, just click here or on the image below. 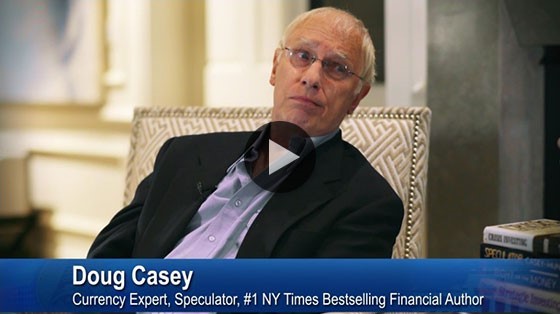