And it’s a decision that could make waves across financial markets.

In late October last year, speculation emerged that China was getting ready to end its Zero Covid policy experiment.

This experiment notoriously involved constant testing, locking people in buildings, and cordoning off entire cities… All to stop the spread of COVID-19.

Then on November 11, it was confirmed. China’s National Health Commission announced the loosening of around 20 different restrictions. Chinese citizens now have greater mobility and autonomy than at any point over the last three years.

And while the rollout of these changes has been gradual, it’s clear the Chinese government is pushing its citizens to move past COVID.

State-run media has performed an about-face. Shifting its propaganda from stories about the virus’s risks to interviewing those who have survived infection with mild symptoms.

There have been articles run in the People’s Daily, China’s largest newspaper, encouraging people to vaccinate and take health into their own hands.

And in cities like Guiyang, local governments have encouraged asymptomatic people who have tested positive to continue going to work.

All in all, China is encouraging its citizens to leave their homes and live their lives.

I believe this push to return to “normal” will unleash a wave of spending across global industries. And it’ll be incredibly bullish for a specific sector of the market…

China Is Sitting on Trillions of Dollars’ Worth of Dry Powder

Although tighter restrictions and lockdowns led to a significant contraction in consumption among Chinese citizens… it also led to a surge in excess savings. 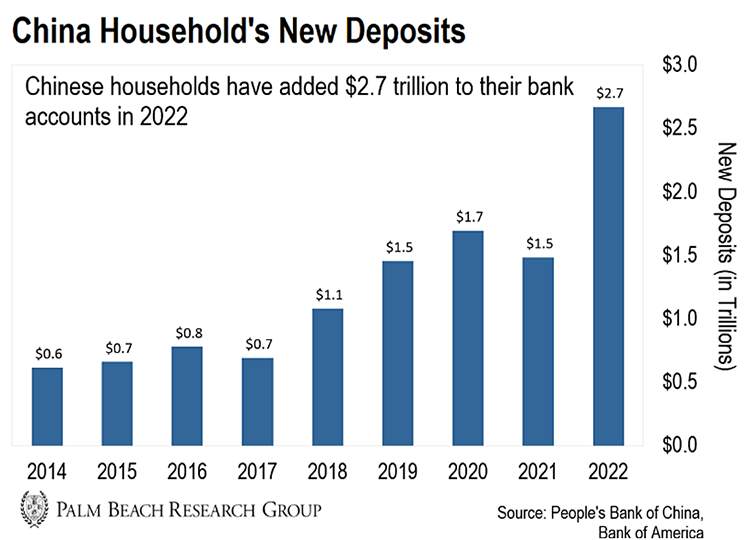 That’s about 34% of Chinese income earned that year… Pre-Covid, that total was around 15% of earned income.

And JPMorgan estimates that Chinese consumers have saved up the equivalent of $827 billion in excess of past spending habits.

It’s eerily similar to what we saw in the U.S. at the start of the pandemic.

At the time, Covid lockdowns kept people in their homes, collecting stimulus checks and enhanced unemployment benefits, with little opportunity to spend.

It wasn’t until March 2021 that we saw over a dozen states lift their statewide pandemic restrictions on mask mandates and indoor capacity limits.

At the start of 2021, Americans were spending at a seasonally-adjusted annual rate of around $14.5 trillion, slightly below their pre-covid peak of $14.8 trillion.

Before the pandemic, China firmly held the title of the second-largest consumer economy in the world, behind the U.S, after 33 straight years of spending growth.

Due to its Zero Covid Policy, consumer spending in China contracted through 2020 and 2021.

So with COVID restrictions behind it, the Chinese government is fighting to get back on its growth path.

And while many industries are in a position to benefit, one market sector will likely see the most immediate impact.

Have Money, Will Travel

China is the world’s most significant source of international travel…

But with its pandemic restrictions lifted, all signs are pointing to Chinese consumers using their cash to travel around the globe again.

According to Trip.com, from January 1 to January 10, international air ticket searches surged by 230% relative to a year ago. Order volume increased by 290% over that same period.

COTRI, a German research firm that tracks Chinese travel, estimates that overseas trips will reach 115 million by year-end. That’s a rebound of about 75% of pre-Covid levels.

The most direct effect of this travel rebound will be on global jet fuel demand. 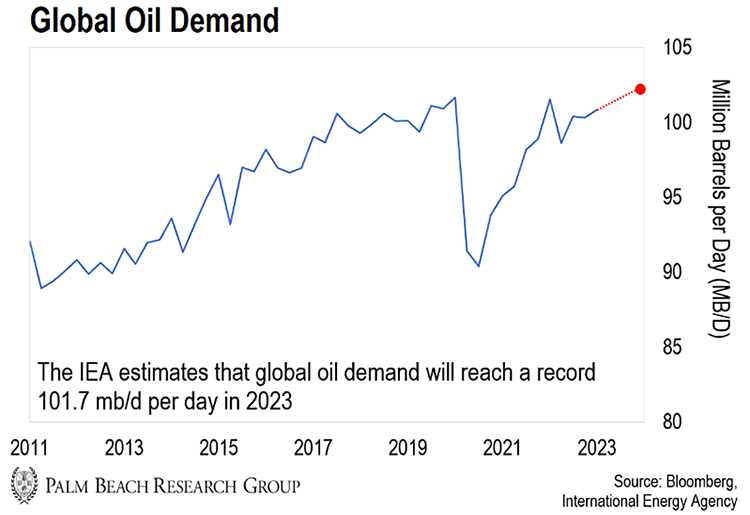 The IEA estimates that jet fuel demand will be the largest source of that growth, comprising nearly 1 million barrels per day… and it cites China’s reopening as the main driver of that growth.

So, what does that mean for the rest of the world?

A resurgence in global oil demand should help support oil prices through 2023.

The average consensus price forecast among big banks and research firms is $84.25 per barrel of West Texas Intermediate (WTI) crude oil this year.

(WTI is the global benchmark for U.S. oil.)

Some expect significantly higher price appreciation, like Goldman Sachs, forecasting $100 per barrel by year-end… a 25% increase from today’s spot price.

So, if you’re looking to take advantage of this increase, consider adding the United States Oil Fund ETF (USO) to your portfolio…

USO is an exchange-traded fund (ETF) that invests in WTI futures and tracks the price of oil in percentage terms.

With China’s excessive COVID policies in the rearview mirror, it won’t be long before air travel from the country rebounds… And the best way to take advantage of that rebound is through exposure to the oil sector.