From Tom Dyson, founder, Palm Beach Research Group: It’s one of the most exciting, most incredible charts in human history…

Unfortunately, it’s also one of the scariest.

It’s a chart from the U.S. Census Bureau. It shows the centenarian population. 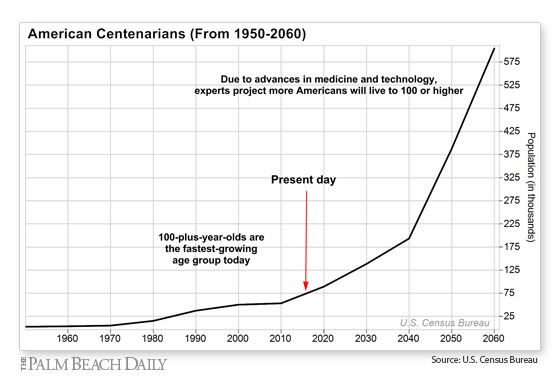 A centenarian is a person aged 100 or older.

The arrow shows how many centenarians exist in America today. The curved line after it shows the explosion of the 100-year-old population in the years to come.

In every developed nation worldwide (such as the United Kingdom, Canada, Australia, and Japan), you’ll see the same trends.

Lifespans are increasing at an unprecedented rate. And the 100-year-plus age bracket is the fastest-growing group of people.

Let that sink in for a minute.

If the population of centenarians continues to increase at its current rate, the U.S. will have close to 500,000 people over the age of 100 by 2055. A sixfold increase from today’s numbers.

Some of you reading this will live to 100. Many experts believe the first humans to live past 125 have already been born.

Thanks to advances in medicine, diet, lifestyle, and hygiene, we’re living longer than ever before. And it’s only going to get better (or worse, depending on how you look at it).

That’s the exciting, incredible part of getting older in America.

The scary part is paying for it all.

Those additional years will also contain health care bills, food bills, electric bills, insurance bills, and dozens of other bills. That’s why one of your greatest concerns should be running out of money in retirement.

Thirty years ago, the solution to money worries in retirement was relatively simple.

There was no concern about the solvency of Social Security.

Back then, you could put your saved money in safe corporate bonds that paid over 9% in interest. Even short-term government bonds paid over 6% in interest.

These days, the solvency of Social Security and just about every government program is in question. Pensions from corporations have all but disappeared. And with interest rates near zero percent, government bonds yield less than 2%.

Add to this the coming volatility in the stock market as The Great Unwinding unfolds.

[The Great Unwinding is what I call the largest credit contraction in history. The world has binged on debt since the Great Depression in the 1920s and ’30s. We’re now at the breaking point. Trillions in debt is starting to go bad and leave the system. I think the market is now in a primary downtrend. This means we’re in a bear market where assets and markets will fall steadily for a long time.]

The risk of running out of money because of all these factors is real… and growing.

It’s perhaps the scariest time to be a retiree.

I don’t think many see it coming. And I don’t see many people preparing for it.

At The Palm Beach Letter, we’re committed to helping our readers solve money and health worries.

That’s why over the coming weeks, we’ll show you one big reason you need to be worried about this. And we’ll share the best way to ensure you don’t run out of money in retirement.

Given our increased life expectancies and the paltry yields on government bonds, these ideas have never been more important for people in or approaching retirement.

Should You Be Worried About Living Longer?

Okay, so people are living longer.

In 2014, the National Center for Health Statistics reported that 65-year-old Americans can expect to live, on average, another 19.3 years, or to about age 84.

And average life expectancy ages are increasing at a faster pace as medicine and technology improve.

Now, most people are counting on Social Security to bail them out. After all, with Social Security, you get steady, consistent income not tied to volatility in the stock market… for the rest of your life.

But if you rely—or will rely—on Social Security for a big portion of your retirement income, pay attention.

With increasing life expectancy rates, I have serious concerns many retirees aren’t taking their financial futures into their own hands. And that they don’t have another plan in place.

If this sounds like you, don’t lose hope. A longer life is a blessing. And no matter how unprepared you may feel at the moment… there’s still time to set yourself up for a fulfilling, worry-free retirement. But you must take the right steps to prepare—right now.

My research team has created a series of investigative exposés on the hidden threats to retirement in America today. At the end of the series, we’re hosting a live retirement roundtable discussion. It features all of PBRG’s brightest minds… sharing their most ingenious ideas on how to salvage retirement for millions of families. Click here to participate in this eye-opening, 100% free event.