Nick’s Note: Bitcoin critics such as George Soros, JPMorgan, and Goldman Sachs, have called bitcoin “a fraud,” “a bubble,” and “a Ponzi scheme.” Yet, they’ve begun investing millions in cryptocurrencies.

If you’re offended by sex, violence, and salty language, then you should skip this article…

Deadwood was an acclaimed Western series that ran on HBO from 2004–2006.

The series was set in the town of Deadwood, South Dakota during the Black Hills Gold Rush of the late 1870s.

As you can imagine, the show was full of shootouts, filthy language, and quite a few sex scenes… Certainly not a show you’d want to watch with your kids.

During the Dakota gold rush, regular folks who got in early made fortunes. These weren’t mining magnates or industrialists. Much like today’s crypto investors, they were savvy speculators pouncing on an opportunity.

What happened to all those early-stage prospectors?

In the fictionalized Deadwood version, wealthy miner George Hearst (father of publishing magnate William Randolph Hearst), swindled them out of their mining shares.

This wasn’t too far from the truth. According to rumors at the time, Hearst used murder, intimidation, and misinformation to force people to sell their claims. He even purchased newspapers in the town to influence public opinion.

In a bid to buy in cheap, Hearst’s agents started to float rumors that the government would seize all land in the town. Prospectors believed the rumors—and sold their mining stakes for pennies to Hearst’s agents.

The conspiracy worked. Hearst and his partners bought the biggest mine in the region—Homestake—for a bargain-basement price of $70,000 ($1.7 million in today’s dollars).

At today’s prices, that’s a combined $56.5 billion in precious metals.

Who’s Behind the Conspiracy

Every day, we hear in the press how the Securities and Exchange Commission (SEC) is cracking down on cryptocurrencies.

We hear that the Commodity Futures Trading Commission (CFTC) is starting a new investigation.

We hear JPMorgan’s CEO saying he’ll fire any of his employees buying cryptos—then we find out his traders in London are buying with both hands.

Friends, the great crypto conspiracy of 2018 is upon us.

All year long, we’ve been under assault by rumors of central bank collusion against cryptos: threats of bans… endless investigations… and the ceaseless drumbeat of negativity from the traditional press.

And yet—amid this shower of negative news—careful observers will have noticed institutions are actually running into crypto investments.

Today, I’m seeing banks, regulators, and the press drown the market in negative news. They’re using the same old trick Hearst used to scare speculators so he could scoop up the Homestake mine for pennies…

Institutions are getting the best prices on cryptos since mid-2017… While the average investor is panic-selling, big investors are buying.

Crypto Wealth Is Being Redistributed

Over the last 90 days, we’ve seen some of the biggest investors in the world flood into cryptos:

Every important lawyer I talk to in the investment space is overwhelmed with crypto questions from their institutional clients. That’s just the latest evidence that institutions are trying to get into this market—not stay out of it.

Don’t Fall Victim to This Conspiracy

Friends, make no mistake… We’re in the middle of a massive handover of wealth from individuals to institutions.

I saw this happen after the housing crisis in 2010–2012, when institutions started buying up foreclosures by the thousands… but individual investors couldn’t get a mortgage.

I saw it in 2003 after the dot-com crash, when institutions started buying up internet and technology stocks on the cheap… But on CNBC, they kept telling the public it was too early to buy.

I saw it during 1994–1995, when institutions scoffed outwardly about how “dumb” money was buying internet stocks… while they were loading up as individuals were selling.

I’ve seen this institutional blueprint for stealing wealth play out again and again.

Don’t be a victim of this strategy. The key is to focus on what institutions are doing… not on what they’re saying.

Across the world, institutional investors are embracing cryptos—not rejecting them.

Just as George Hearst made a fortune using misinformation to buy the Homestake mine on the cheap… institutions know they will make vast fortunes buying cryptos at depressed prices. Otherwise, they just wouldn’t bother with it.

We will ride the wave of misinformation through this dark valley of despair and into the bright sunlight of the life-changing future ahead of us.

P.S. On Thursday, July 19 at 8 p.m. ET, I will tell you the whole truth, and nothing but the truth, about cryptocurrencies… plus how Wall Street and Washington are covering it up.

I’ll broadcast this special event live from media personality Glenn Beck’s Dallas studios. We’re calling it The Great Cryptocurrency Conspiracy of 2018. You can register for this free event right here.

During the live broadcast, I’ll reveal three cryptocurrency recommendations. Plus, you’ll have a chance to claim a share of the $2 million bitcoin giveaway.

You’ll also have get an exclusive free copy of my new special report, The Cryptocurrency Manifesto, just for registering. Don’t wait… Space is filling up fast. So reserve your seat today right…

In our July 4 interview, Teeka said that America was headed for a Second Civil War. Concerned readers responded…

From William L.: In response to Teeka’s interview, I’d like to offer a statement from Scottish economist Alexander Tytler, who in 1787, was reported to have commented on the then-new American Republic as follows:

A democracy is always temporary in nature; it simply cannot exist as a permanent form of government. A democracy will continue to exist up until the time that voters discover they can vote themselves generous gifts from the public treasury. From that moment on, the majority always votes for the candidates who promise the most benefits from the public treasury, with the result that every democracy will finally collapse due to loose fiscal policy, which is always followed by a dictatorship. The average age of the world’s greatest civilizations has been about 200 years.

There are now 3 camps:

From Michael P.: You asked what was the root cause of America’s political divisions. Here’s my answer: The liberal media’s biased, twisted, false, and selective reporting.

The media servse up ideology to “liberals” who are all too willing to consume this content as legitimate, even though not very long ago it would have been considered radical even by their own standards.

My thoughts of what might help this situation lie in a more conservative and traditional approach in which the “Silent Majority” become less silent. I, too, have never seen such a divided political environment in my lifetime.

From Tom D.: Until President Trump was elected, the left wing had free reign in the Democratic Party, most of the media, and in our educational system. I don’t want to sound partisan, but when one group controls those three main functions in our society (and that is very much akin to communism, fascism, totalitarianism, etc.), it will breed division.

Trump at least made us aware of it. Hopefully, he’ll help stop it so there is more of a free exchange of ideas… not a suppression of anything other than left wing ideas.

The Aurora Borealis, or “Northern Lights,” happens when solar particles rip through the Earth’s geomagnetic field and smash into gas atoms.
Something similar exists in the stock market…

It appears when three major forces collide. As a result, the laws of risk and reward reverse. And the gains that are generated are incredible—both in their return and the speed in which they’re created.

Click here to see where this anomaly will appear next… 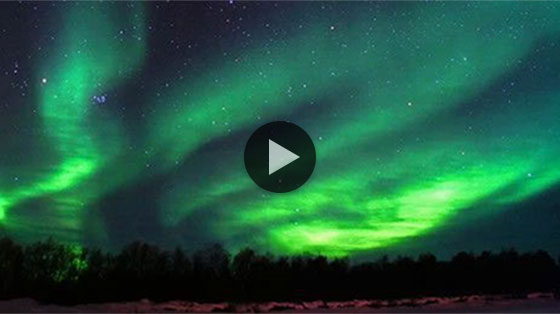