“Can you believe they want a million dollars for that piece of crap?”

That was the first thing I heard as my realtor and I walked up to the house in question three years ago.

It was the next-door neighbor shouting in a raspy voice, and it rattled me.

After all, I grew up decidedly middle class in Northeastern Pennsylvania. About as far from a Santa Barbara beachfront community as you can get.

And the neighbor was right… it was basically a piece of crap. Built in 1953. Minimal updates. Some visible termite damage right there on the eaves.

My wife and I ended up buying it anyway, and it’s already worth a couple hundred thousand more than I paid…

And my neighbor has since been forced to move into a mobile home park several miles inland.

I’ll tell you why – and what EVERY investor can learn from his situation – in just a minute.

If there’s one place in the world that epitomizes the intersection of wealth and glamour, it’s California.

For many decades now, the state has attracted wealthy individuals and dreamers of all stripes.

Due to its large population, it doesn’t lead the nation in per-capita millionaire households. But in absolute terms, the numbers continue to rise across the board.

And despite some high-profile examples of rich individuals leaving our notoriously high-tax state – think Elon Musk and Joe Rogan – the numbers show more wealthy people moving into California than out.

In fact, a Stanford research paper from 2018 found there was “little migration response to changes in top tax rates” in California.

And in a 2019 interview with The Los Angeles Times, one of the report’s lead authors explained further…

Substantially more rich people are moving into California than moving out… They want to be where the action is. There’s more opportunity in California. There are a lot of ways to make a lot of money in California, more so than in other places…

Now, California DOES have a net outmigration of low-income folks who can’t afford to live in the state and are being pushed out by high-income homeowners.

So, yes, a net number of people have been leaving California. But more and more people earning at least six figures continue to move in.

And all the talk about big tech firms leaving for other states is equally overblown.

For example, Google recently won approval to build out 800,000 square feet of office space in Santa Clara County, with another 1.3 million-square-foot development in downtown San Jose.

Indeed, California real estate has only become more desirable in the wake of the COVID crisis as the wealthy reevaluate where they live and why.

That alone is enough to keep the state’s real estate prices rising far faster than national averages. However, another factor continues to amplify prices for Golden State properties: Scarcity.

There’s a very limited amount of land available in the state’s most desirable cities and towns. Some estimates indicate California needs 20% to 30% more housing stock to support its huge population. 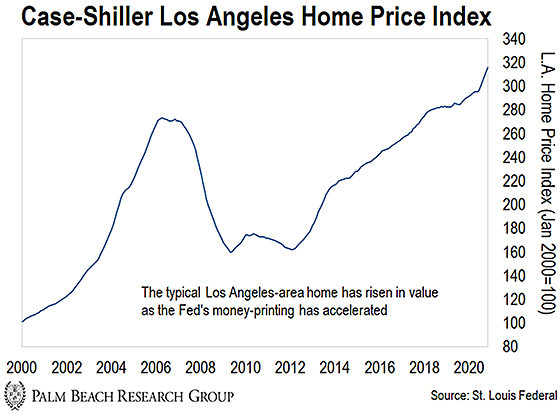 According to the California Association of Realtors, sales of single-family homes jumped 28% year-over-year through December 2020 while prices gained 16.8%.

Which brings me back to my little corner of Santa Barbara…

What California Real Estate Can Teach Any Investor

Prime California real estate is what we call a “trophy asset.”

It is tangible. It is in extremely limited supply. And wealthy people find it highly desirable. That combination, especially in an era of unprecedented money-printing, continues to drive prices higher and higher.

It’s the same story with many other things, too – pristine collector cars, top-tier artwork, Swiss watches, and even relatively new assets like bitcoin.

People with money want to protect their wealth by getting the heck out of cash!

Does that mean prices will only go straight up from here? Of course not.

At the same time, you don’t want to end up like my former neighbor.

It turns out he had been renting that house next door for more than 30 years… always scoffing at the ridiculous price increases and waiting for the “right” time to buy.

While his daughter went to elementary school, prices doubled… Through her high school years, they tripled… And by the time she was in grad school, they had easily quintupled.

My neighbor didn’t mind too much because he was still paying far-below-market rent. But not long after I moved in, his landlord unexpectedly decided to sell the property.

In less than 24 hours, the house had several bids and went under contract to out-of-state buyers. My neighbor and his wife had to pack up three decades of memories and vacate on short notice.

Completely priced out of their lifelong neighborhood, the only way they could stay in the Santa Barbara area was to move to a mobile home community several miles inland.

And as I mentioned earlier, prices have continued to jump quite a lot since they moved out.

So by all means, approach any investment skeptically – whether it’s a plain vanilla stock fund or a $1 million home in Santa Barbara.

Failure to do anything carries its own set of risks… even if it takes years, or sometimes decades, to fully realize that you’ve been left behind.

P.S. While historic levels of money-printing are sending real assets higher, growth in another kind of trophy asset is on its way to creating more than 800,000 new millionaires over the next few years…

It’s a new force ripping through our economy… and 99% of Americans have no idea just how much it will fundamentally change the world.

To learn more about what Teeka predicts will be the biggest shift of wealth and power in modern history – and how you can be a part of it for just $10 – click here.