My favorite signal for investing in value stocks just lit up…

The last time it did, value stocks outperformed growth stocks by 80% the following seven years.

Conventional Wall Street thought is that you should own an equal amount of value and growth stocks. The Street calls this a “diversified portfolio.” It makes your money easier for them to manage.

But this thinking is wrong. And here’s why…

For prolonged periods, value stocks can outperform growth and vice versa. The key to making money is to identify when the trend is about to change.

You can make a lot more money by weighting your portfolio towards whatever the market is favoring.

You can see that in the chart below… It shows the ratio between the MSCI World Value and Growth indexes.

The ratio takes the total return of the value index and divides it by the growth index. When the black line goes up, that means value is outperforming growth. 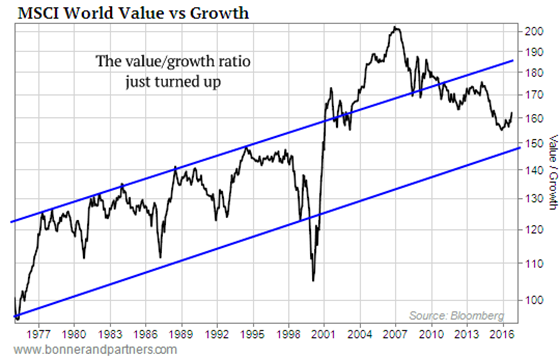 Over time, the black line has trended upward. That means value has outperformed growth over the past 40 years. But the trend isn’t a straight line up… It’s cyclical.

Right now, value is near the bottom of the range and turning up. That means we can expect value stocks to retake their leadership position.

And that means outsized gains for value stocks.

Value Is on the Comeback

The last time growth stocks beat value stocks for this long was in the late 1990s—during the dot-com bubble.

But when the cycle turned, value dominated growth for the next seven years. During this time, value stocks returned 75%, while growth stocks lost 5%.

To take advantage of this trend, you could invest in Berkshire Hathaway or a value-oriented ETF like the Vanguard Value ETF (VTV). These securities will track the performance of value stocks.

If you’re looking for value stocks that have long runways for growth—the kinds of stocks that can return 100 times your money or more, you should take a look at Chris Mayer’s newest investment service, Focus.

In this service, Chris looks for small companies that enjoy high returns on their assets… reinvest the profits… and earn those high returns again and again.

Chris has been Agora’s top-performing analyst over the past 15 years, averaging over 16% annual returns on safe, conservative value stocks. His method beat Carl Icahn, George Soros, and the book value of Warren Buffett’s Berkshire Hathaway by as much as 2-to-1 for 10 years in a row.

The markets have no fear, but you should…

Investors think they are invincible these days. Just go long and your portfolio will perform well.

We can see this in the Volatility Index (known as the VIX). The VIX measures the expected price movement of the S&P 500. It’s commonly referred to as the “fear gauge.”

When it’s low, investors are complacent. And as you can see in the chart below, the VIX is at multi-year lows. 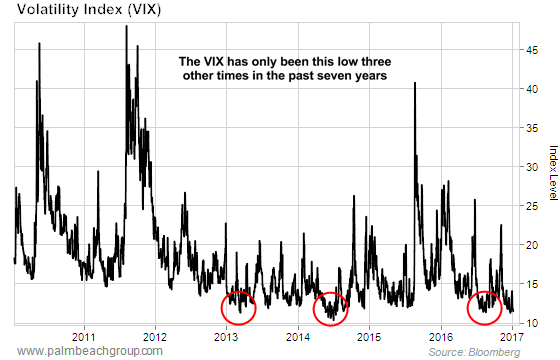 That means you can expect the markets to have more price movement soon… And when volatility increases, it’s usually because the market is going down.

Don’t “sweat” the pullback in gold

Rising wages are leading to inflation… And that should drive up gold prices in 2017.

Now, Wall Street is waking up to this idea… and that’s pushed gold up about $60 per ounce. You can get Big T’s full scoop right here.

Bitcoin Decision Imminent: Last week, the Securities and Exchange Commission (SEC) announced it would decide whether to approve the Winklevoss Bitcoin Trust ETF on March 11. As we wrote last year, the ETF would be the first to exclusively track bitcoin.

From Brian P.: Your publication is great. It’s taught me so much about the new topic of cryptocurrencies. I see their value… and it is very interesting that you can mine them as an income. Have you published any guidance or advice on mining, or will you?

Editor’s Reply: We haven’t provided any advice on mining cryptocurrencies. It’s a very complicated process that requires computer skills beyond the scope of most investors. And in some cases, mining requires significant investment in computer hardware. So, for now, we’re leaving digital currency mining to computer specialists.

From Wayne G.: If digital money eliminates cash, won’t their design also be the elimination of gold?

From Randall W.: This message is for Teeka. Why are you so positive the U.S. government won’t make cryptocurrencies illegal or introduce its own (mandatory) version? Many of us would like a fact-based response.

Editor’s Reply: Hi, Wayne and Randall. We reached out to our PBL team for a response, and here’s their take:

Nothing is stopping the U.S. from taking that action… just like there was nothing to stop the U.S. from banning alcohol during prohibition. But how enforceable was it? Did the value of premium alcohol go up or down? It skyrocketed higher.

What is unique about bitcoin is that if you hold it in an offline wallet, it’s completely anonymous, secure, and undetectable. That makes enforcing a ban very difficult.

The other thing to remember is that bitcoin is an international storehouse of value. It’s primarily used by non-U.S. folks. So if the United States bans it… it won’t make a difference to the value of bitcoin (other than to make it much more valuable in the same way prohibition made premium alcohol much more valuable.)

Longtime PBRG friend Chris Mayer says he’s looking for 1,000 people to join him in the most ambitious project of his career…

In this project, Chris is focusing on small companies that—while more volatile—have the potential to become “the next Starbucks,” and grow your money into a huge pile.