In September 2017, word leaked that cellular service provider T-Mobile had offered to buy rival Sprint for $6.71 per share.

Today, Sprint trades around $6.10 per share while both sides continue to work on the deal.

But those who invest in Sprint today could get a guaranteed 10% profit whenever the deal closes. That’s because T-Mobile has already agreed to buy the shares at the previously mentioned $6.71 per share—60 cents more than where it trades now.

(To be clear, we haven’t studied the ins and outs of the T-Mobile–Sprint deal. We’re just using it as an example of how an arbitrage deal could work. As always, do your homework before making any trades or investments.)

Today, I want to show you how you can use Skim Trades to complement your long-term wealth-building goals. As a bonus, I’ll also show you a simple way to add some exposure to these types of trades to your portfolio.

As legendary investor Warren Buffett implied in the quote above, Skim Trades can generate income year in and year out.

Hedge funds make these trades after a company announces a buyout deal… They then try to capture the difference (or “spread”) between the market price and the buyout price.

These low-risk trades can give us double-digit gains in six to 12 months. That’s because generally, the targeted company doesn’t reach the buyout price right away.

That’s a 40 cent gain—or a 1.7% return in 42 days. That may not sound like much… but it equates to an annualized return of nearly 16%. That’s safe income you can generate in less than two months.

And we think there will be plenty more opportunities to make these types of trades. As you can see in the chart below, merger activity remains in an uptrend. 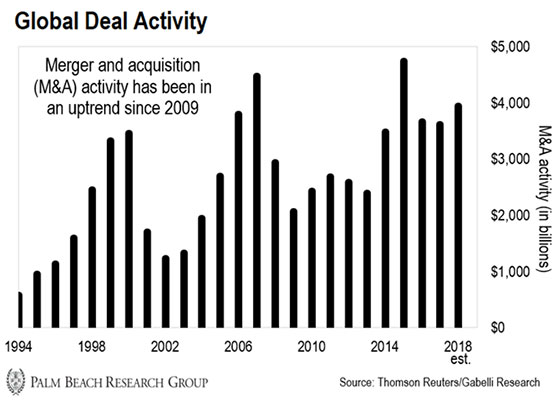 Not only are we seeing more merger activity… the returns are growing, too.

Take a look at the next chart. It shows the Hedge Fund Research Institute’s Merger Arbitrage Index. 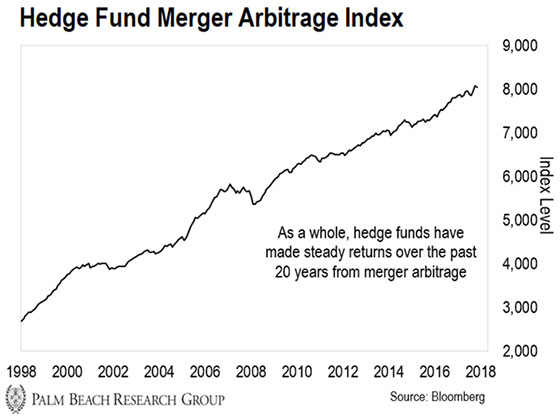 Doubling Your Returns the Safe Way

Today is an especially good time to make money with this strategy.

In 2018, the average spread has soared to 8%—more than double this time last year. That works out to an annualized 26% gain… exactly what we look for in our Skim Trades.

Of course, the spreads are wider today for a reason: There’s more uncertainty in the world—from trade war anxiety to fears of political upheaval.

However, we think the setups are favorable. As we’ve reported before, trade war fears are overblown and the economy is humming along.

One way to gain exposure to merger deals is the IQ Merger Arbitrage ETF (MNA). The fund uses a systematic approach to investing in merger arbitrage deals. It also has the longest track record and largest asset base of any merger-related ETF in the marketplace.

P.S. As I mentioned above, Skim Trades are a simple way to get some exposure to merger arbitrage plays. But if you want to make potential gains, you’ll need to find companies that are flying under the radar.

Former hedge fund manager and PBRG guru Teeka Tiwari has developed a method to find these types of companies. He calls it the “Alpha Edge”…

And he says if you’ll give him just 15 minutes per month, his “Alpha Edge” method could help you make an extra $43,800… $62,400… even $118,000 or more this year, and every year after—without buying stocks… without buying cryptos… and whether the stock market goes up or down…

You can learn more about his new strategy right here…

From Scotty J.: I’m excited about Teeka’s new Alpha Edge service. I love selling options. My appetite for information from Palm Beach Research Group is insatiable. Thank you for helping us. I, for one, appreciate it tremendously.

From Hany I.: A few weeks ago, Teeka told Palm Beach Confidential subscribers that you would provide guidance regarding the Ontology (ONT) token swap. I believe the deadline is the end of September. Please advise.

Nick’s Reply: Thanks for the writing in, Hany. Teeka and his team sent step-by-step instructions on how to receive your ONT tokens on September 11. You can read the update right here.

Teeka’s headed to Bermuda for the first-ever Legacy Investment Summit in the weeks ahead. And he asks you to join him…

And it’s not just Teeka. Longtime PBRG friends Bill Bonner, John Stossel, and Glenn Beck will also be there. There’s still time to save a seat and receive $1,000 in bonuses to join us. Details here.