I only know of one person in the world who called the recent correction in the market to the day.

On Wednesday, January 24, this man sent a letter out to clients warning that the market had become overbought. His proprietary system, which analyzes half a million data points each and every day, showed the market was due for a pullback.

He made a call saying as much to his readers. And that’s exactly what happened…

Who Is This Guy?

The man who made this prescient call is Jason Bodner.

He’s the co-founder of Macro Analytics for Professionals (MAP). As the name implies, it’s a research service catering to big money managers. (You’ll be seeing more of Jason’s name in the Daily starting today. We’re hoping to get more expert commentary in the next several months.)

Before that, he headed up the derivatives desk at investment bank Cantor Fitzgerald. Many people outside of Wall Street have never heard of Cantor, mostly because it’s a closely held, private company.

But everyone on Wall Street knows this bank… It’s a major player in the bond and equity markets.

It was here that Jason learned how to use everyday market data to detect a golden goose of investing.

Jason’s system detects when major insiders, activists, or institutional buyers begin to take big stakes in an individual stock. In other words, when guys like Warren Buffett, Carl Icahn, BlackRock, and Goldman Sachs start to quietly pile money into an idea, Jason’s system picks it up before it ever breaks the headlines.

Major research institutions pay thousands of dollars a month to get Jason’s services.

His system is impressive. Jason showed me what he does on a daily basis. Without getting into the weeds, he follows about 4,000 stocks and gets over 120 data points for each security.

That means his system is taking in about half a million data points to put out buy and sell signals every day.

And it’s almost unreal how often he picks up this insider buying. According to Jason, it’s about as close to legally front-running as you can get.

How does Jason find these plays? He uses a proprietary system called the MAP ratio.

This ratio tracks unusual institutional buying and selling. Each time the ratio reaches extreme levels, it creates a very rare alert that the market will soon explode higher or lower.

Getting back to Jason’s recent big call… Two weeks ago, he warned his subscribers that the market was overbought. And he showed them the chart below.

The blue line is the indicator. Whenever it gets to the red zone (over 80), it presents an overbought signal. And as you can tell, the market had pullbacks pretty quickly after becoming overbought. 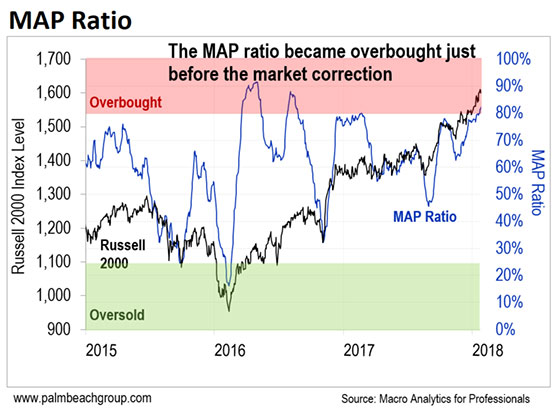 He went on to say, “I believe near-term we could expect a technical sell-off. Many technical traders will find these overbought levels way too good to be true and begin to hammer it back into its rightful place.”

That’s Wall Street speak for, “We expect the market to go down.”

And he nailed it. He sent this out on Wednesday, January 24. The next day, the small-cap Russell 2000 cracked and the rest of the markets tanked the following week.

He’s probably the only person in the world that called the top exactly.

What Does Jason Think Is Next?

Jason told me that this pullback caused the MAP ratio to fall to 61—normal territory. But he told me it’s likely we’ll see this ratio fall a little more in the next couple weeks.

That means he expected the market to fall a little further, which it did.

We are still far above the extreme levels of oversold. This tells us that institutions haven’t used this pullback to add to their positions.

Typically institutions act opportunistically during these sell-offs. And the big buying from institutions helps turn the market around.

Until we see these institutions come in and start buying, Jason believes the markets will consolidate near current levels for a couple months.

As regular Daily readers know, the global economy is great, sales and earnings are terrific, labor markets look strong, and confidence is still relatively high. We are having a stellar sales and earnings season with the best forward guidance in history.

Jason said that you should be compiling a list of stocks to buy on any weakness in the market. And here are seven that are on the top of his watchlist… ones the big money funds are probably going to start buying soon.

P.S. Tomorrow, I’ll show you another strategy you can use to enhance your returns during a consolidating, choppy market like we expect to see over the next couple months.

From Rob M.: Tell Teeka not to be discouraged by the fearmongers and critics… some people lack emotional intelligence and can’t handle the swings/volatility instead of seeing them as buying opportunities. Those people aren’t satisfied unless you’re right 100% of the time and can forecast exactly what’s going to happen and when.

I value what the Palm Beach Research Group is doing and want as much education on the [crypto] space as possible.

Editor’s Note: Are you buying into the crypto correction right now? Let us know right here…

If Trump has any shot at getting re-elected in 2020, he’ll need to keep strengthening the stock market.

And this small company—considered too vital to fail by both the Oval Office and tech giants like Facebook, Amazon, and Google—is his ticket…

Find out more about this company, and how you can get in before the masses, right here. 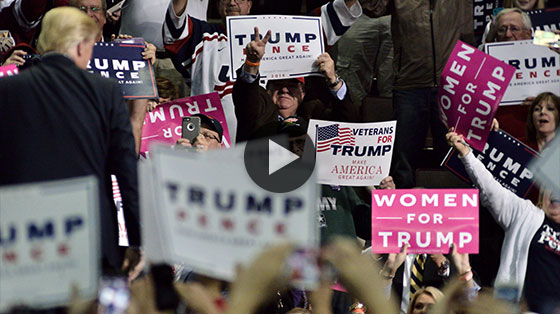