In today’s market, the only chart I look at every day to give me an idea of where it’s headed is the 10-year Treasury yield.

This chart dictates the price of nearly every asset. That’s because the yield on the 10-year Treasury is considered the risk-free rate of return.

Institutions use the risk-free rate in their valuation models. It tells them how much to pay for stocks, bonds, real estate, and private businesses.

(They call the risk-free rate the “discount” rate).

As the risk-free rate rises, the final values spit out by their valuation models go lower.

When rates rise, institutions move away from high-risk investments that pay little to no earnings (like tech stocks and bitcoin)… to safer ideas like blue-chips dividend payers and investment-grade bonds.

That’s why the tech-heavy Nasdaq and bitcoin were down 33% and 65%, respectively, last year… but the Dow (which is stuffed full of dividend-paying blue chips) only dropped 9%.

As you can see below, the risk-free rate has dropped from 4.3% in October to a current yield of 3.5%. 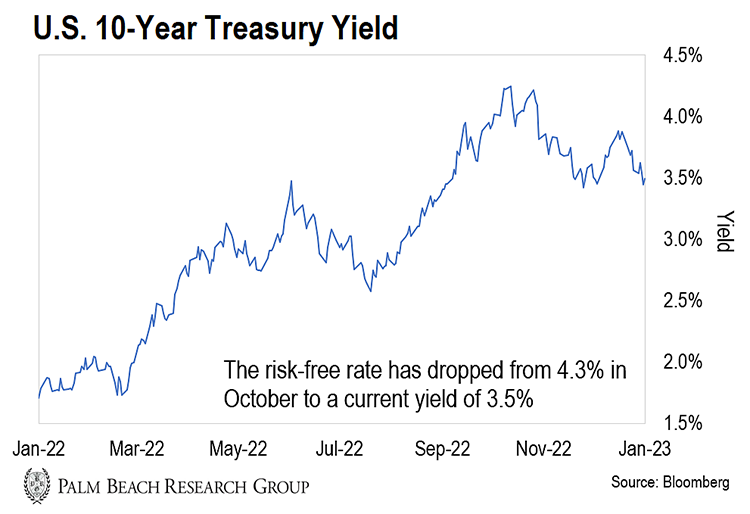 Meanwhile, we’ve seen the Nasdaq and bitcoin rise about 5% and 16%, respectively, since the beginning of the year.

Now, you know why they’ve rallied… Because the risk-free rate dropped.

But I believe this uptrend will be short-lived.

If you look at the valuations of equities and real estate… they’re out of sync relative to the risk-free rate of return.

Market participants are betting the Federal Reserve will pivot soon by ceasing its current series of rate hikes and start cutting rates.

They’re living in a fantasy world.

Fed Chair Jerome Powell has made it clear he’s not finished raising rates. I believe we can see rates go well north of 5% this year before the Fed pivots.

The market just doesn’t want to hear this. It’s acting like a baby who’s covering his ears and singing la la la.

And the reason is simple…

I saw Powell talk tough on rate raises back in 2018. And he did start to raise them… but backed off very quickly when President Trump chewed him out in the press.

But this time, it’s different…

What the Fed Wants, the Fed Gets

Powell is serious about reigning in inflation. And he’ll do anything and everything within his power to get it under control.

I’ve spoken to folks who have their ear at the door of the Fed. And they’re telling me the Fed is looking closely at employment numbers.

Right now, the United States is at full employment. We haven’t seen the unemployment level this low since the 1960s.

Now, whether you agree with him or not, Powell believes he needs to blow a hole in those numbers. He wants to create unemployment at a scale sufficient enough to slow down the U.S. economy, which he believes will bring inflation under control.

Basically, the most powerful man in the financial world wants to kill jobs. And it doesn’t matter what you or I think about it.

As investors, we have to check our emotions at the door. Because if that’s his plan, we need to listen to him and be rational.

Inflation is running at 6.5%… So that means Powell will need to raise rates at least another 200 basis points just to pull even to inflation.

As I mentioned above, I believe we’ll easily see rates breach 5% this year.

So why would I risk my money in the S&P 500 to earn a 4.78% earnings yield when I can get a near risk-free return of 6% in investment-grade bonds?

There’s no equity risk premium in the S&P 500 right now. It needs to drop at least 20% before it makes sense relative to the current risk-free rate.

So the only way stocks make sense is if bond yields go lower… and that’s the bet that the market is making. It’s betting directly against the Fed.

You can’t win that battle.

A Silver Lining in a Gloomy Forecast

My hands-on knowledge of financial markets only goes back to the late 1980s.

So I’ve never seen the Fed raise rates this aggressively without considering the economic impact.

The last time we were in an environment like this was the late 1970s to early 1980s.

Back then, the Fed jacked up interest rates as high as 20%. And it led to absolute carnage in the markets.

I know this all sounds gloomy. But if there’s one silver lining, it’s that the Fed can’t raise interest rates forever because it will bankrupt the government.

If Powell jacks up rates higher than that, the interest payments alone will bankrupt the U.S. government… So Powell only has a limited window to act.

So what does that mean for us in the meantime?

I’m waiting for rates to spike again… and when they do, I plan to deploy my short-term funds into long-term investment-grade bonds yielding over 6%.

That’s because when the Fed does finally pivot and start to bring rates back down, long-dated bonds can easily rally 15-30% higher… potentially matching the returns of the indexes with virtually zero risk to your investment dollars.

And if I’m wrong and rates drop like a rock from here… Well, guess what?

Like many of you, I’m already loaded to the gills with risk-on assets. Those assets will boom higher in a low-interest-rate environment.

Friends, the Fed will eventually break something. And Powell will have no choice but to pivot. That will kick off a new bull market and send asset prices soaring.

But we’re not there yet. And trying to time it – rather than just waiting for it to happen – is a fool’s errand.

P.S. While I recommend patience in the stock market for now, a different asset class has outperformed all my traditional investments combined over the last two years…

It’s inflation-proof and Fed-proof… and I don’t expect that to change any time soon.

To learn more about this volatility-resistant asset and how you can get started for as little as $50… click here.